You are here: Home / Redeeming Theology / God is Not Angry With You 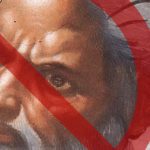 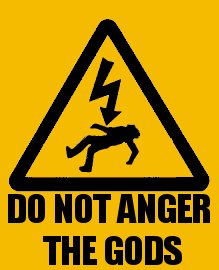 One of the reasons Jesus came was to reveal God to us.

Among all the truths that Jesus revealed to us about God, one of the most critical truths in connection to the violence of God in the Old Testament is that God is not angry.

The violence of God in the Bible makes it appear that God is angry with us, and one way He deals with His anger is by slaughtering people through flood, earthquakes, pestilences, diseases, and enemy armies.

God is Not Angry with the World

When people believe that God is angry with the world, and is actively punishing us for the sins we have committed by sending us diseases, famines, earthquakes, storms, terror, and death, we malign the character of God. God does not torture, rape, kill, and murder in order to teach us to love and obey Him. While there is indeed blood on God’s hands, this blood is His own. God does not force us to bleed for Him so that we might learn some sort of lesson about obedience.

[God does not bring] about suffering in order to discipline a person. …This presumption morphs to cruel absurdity when we are speaking of horrors like a man mourning his murdered wife or a mother grieving over her stillborn child.

This way of thinking takes the cruel arbitrariness of life and deifies it by projecting it onto God. When this is done, the beautiful clarity of God’s loving will revealed in Christ and centered on the cross is obscured by a nonbiblical picture of a God of power. And Jesus’ simple words “If you see me, you see the Father” are qualified by every terror-stricken scream of torture throughout history (Greg Boyd, Is God to Blame? 82).

But God is not angry.

God is not out for bloody revenge.

God does not punish, kill, torture, or maim so that by some inscrutable aspect of His mysterious will, He might teach us a lesson.

Quite to the contrary, as I reveal in my book, The Atonement of God, God’s nature and character is revealed in Jesus Christ.

How Jesus Reveals God is Not Angry

When Jesus began to minister in Galilee, one of the common threads of His miracles and message was that God is not angry at us. Instead, God loves us, and wants to redeem, deliver, and rescue us from the clutches of Satan, the bondage of sin, and the sting of death.

I wish we had space and time to go miracle by miracle and parable by parable through the Gospel accounts to see how Jesus reveals the love and forgiveness of God through everything He says and does.

Such a study would reveal that the consistent message of Jesus is not that God is angry with us and has departed from us, but that we have misunderstood God and have departed from Him, and now, finally, God is bridging that divide by drawing near to us and reconciling us to Himself once and for all in the person and work of Jesus Christ.

Take one of the more popular parables as an example: the parable of the Prodigal Son. We all know the story. A man has two sons. The younger asks for his portion of the inheritance, and when he has received it, travels to a far country where he squanders his inheritance on parties. He eventually finds himself living and eating with the swine, and so decided to return home to his father, in the hopes that he might be taken on as a servant. But when he is a long way off, the father sees him coming and runs to him. Then the father throws a party for his long-lost son, which leads to a teachable moment for the older son.

There are multiple levels of interpretation to this parable, but one is sufficient for our purposes here.

The prodigal son is not just a story about a wayward Christian, but is a story of cosmic proportions. It is about a father who loved his son so much, he let the son think the worst of him, insult him, slap in the face, treat him as if he were dead, and then on top of it all, depart into a foreign land. Note that the father goes nowhere. The son has done all the leaving while the father stays right where he was. 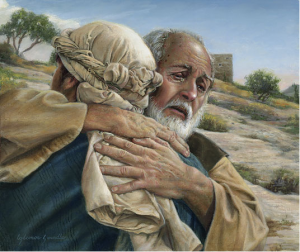 When the son returns, the father has clearly been watching for his return, for when the son is still a long way off, the father sees him coming, and runs to meet him on the road. For a wealthy middle-eastern man, any sort of running was considered shameful, but to run to meet a son who had betrayed you was extremely shameful. Nevertheless, due to the father’s great love for his son, he runs to meet him, and not only that, but gives him a warm welcome and throws a party for him.

The only thing that is really different about this parable and how God behaves toward prodigal humanity is that God came Himself into the far country to seek and save the lost. Then, when God found His lost child, the child killed Him.

But other parables represent this aspect of what God has done for humanity in Jesus Christ. The point of this parable, as well as many of the other parables by Jesus, is to show humanity how badly we have misunderstood God and what God is doing in this world, and that God is not out to destroy us, slaughter us, or punish us, but is seeking to bring us back into His family, to rescue us from the pigsty we find ourselves living in, and to throw us a party when we are reconciled to Him.

This sort of message is found, not just in the parables of Jesus, but in all the other teachings and miracles of Jesus as well. By the love of God, those who were once far off have been brought near and have been accepted once again into God’s family.

God is Not Angry; God is Love

God is not angry with us; He loves us! And since the first sin of Adam, God has been doing everything He can to rescue and deliver us from sin, death, and devil.

The violent portrayals of God in the Bible are actually part of this rescue operation of God. He is not the one commanding or performing these violent actions, but is instead, taking the blame for them. Just like the father of the prodigal son, out of His great love for us, God is shaming Himself for our sake.