You are here: Home / Redeeming Life / God loves you? No … God LIKES You 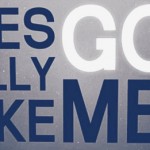 Recently I wrote a post on the All About Eve blog that the theological invitation “Believe in Jesus for eternal life” is more concretely summed up with the statement “God loves you.”

I wrote that many people have trouble understanding what it means to believe in Jesus for eternal life. And while this invitation is referred to over and over in the Gospel of John (e.g., John 3:16; 5:24; 6:47), this offer of eternal life is often equated with the fact and foundation of God’s love for humanity.

So I believe that if we really understand God’s love for us, we will have also understood that He gives us eternal life freely through Jesus Christ.

Therefore, when someone says, “I don’t know if I have believed enough, or believed the right thing,” one way to help people sort through this is to ask if they know that God loves them. 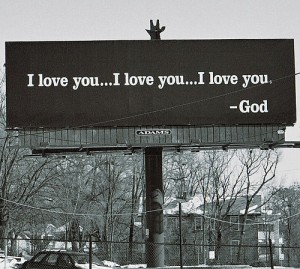 And I mean REALLY loves them. No conditions. No limits. No ifs, ands, or buts.

This sort of understanding of God’s love is so radical, it revolutionizes everything we think about God, Scripture, ourselves, and the church.

I have previously written about this on numerous posts in numerous ways.

But here’s the thing that I have come to realize in the last couple of days:

The church has bastardized the biblical concept of love.

I doubt you could find a church in the world which does not preach the message that “God loves you.” But so few churches and Christians actually understand it or believe it.

Yet rather than try to fight this misunderstanding about love, I think might be best to start saying something else instead.

Yes, yes, I know. “Like” is a much weaker word than “love.” But there are countless millions of people who would agree in a second that God loves them, but who do not for a second believe that God likes them.

To understand what I’m talking about, let’s back up a bit. In Christian circles, it is not uncommon to hear someone say this: “I love my neighbor … but I don’t like them.” Or maybe instead of your neighbor, you have said this about an in-law, the church gossip, or a rude deacon.

When we say we love someone but don’t like them, we mean this: “I love them (because I know I am supposed to), but I don’t want to hang out with them or be their friend.”

This sort of idea is often preached in our pulpits as well. Again, you will sometimes hear pastors say this: “As Christians, we are supposed to love everybody, just as God loves us. But even though you love them, you don’t have to like everything about them. Remember, we love the sinner and hate the sin!”

Do you see? We have this attitude toward others because we think this is God’s attitude toward us. We think God loves us, but doesn’t really like us. At least, He doesn’t like us the way we are now. He likes some future version of us where we have cleaned up our lives, gotten rid of sin, read our Bibles and pray more faithfully, and witnesses regularly to our friends and neighbors. That future “fixed” person is the one God wants to be friends with and hang out with; not the “broken” and sinful person we are now.

So you see? Though we believe God loves us, we don’t really think He likes us.

But here is the Gospel truth as revealed in Jesus Christ: GOD LIKES YOU!

Let me bring this down to earth a little bit more.

Think of a famous author, actor, or musician you would love to be friends with.

For me, I think of people like N. T. Wright, Brad Paisley, and Keanu Reeves. I think it would be awesome to be best friends with these guys. You know … to have such a good friendship that it became informal … that they just drop by my house to see what’s going on, and I could do the same for them. It would be assumed that we watch football together on Monday nights. That when we went camping, we would invite the other along. That if we just wanted to chat about life and theology, we would call up the other person first.

Do you have someone in mind who is like that? Someone you would love to get to know, hang out with, and have “inside jokes” with? 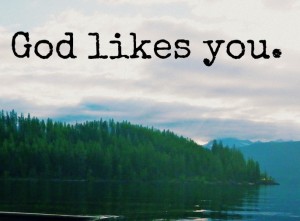 Usually, when we think about God, we tend to put God in the place of these famous people we want to know. We think, “It would be so cool if God and I were on a first-name basis. If I could call God any time I wanted. If we could hang out like best friends.”

And this is the same way God feels about you.

God likes you so much, He wants to even hang out with you when you are weeding your garden, filling your car with gas, and running errands to Sears.

God is your biggest fan, and He dreams of just being in your presence.

This is the Gospel message. This is what Jesus came to reveal.

Do you believe this?