You are here: Home / Jesus says We’re all Doomed 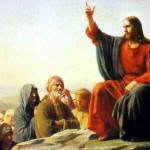 In my Scripture reading group yesterday, we discussed Matthew 5:17-20 which concludes with Jesus saying that unless your righteousness exceeds that of the scribes and the Pharisees, you will by no means enter the kingdom of heaven. As always with this group, I tried to say as little as possible.

After reading the four verses through, we went back and started reading and discussing the verses one at a time. The first three verses generated lots of discussion about the Jewish law and the results of keeping or breaking it. But the final verse threw the group into an animated discussion.

Eventually, one of the guys said, “If I understand Jesus right, we’re all doomed.” There was further debate about this, but eventually, the group consensus was that Jesus was not painting a rosy picture. If Jesus was right, and if we understand what he is saying, everybody is doomed.

One person asked how I understand these words of Jesus. After affirming their conclusion, I told them that others had also struggled with the truth that nobody can keep the entire law, and so either we are all doomed, or God must have made another way. I then took them over to Romans 3 where Paul talks about this. It was exciting to see the group grasp the idea that they were faced with two options: either try to keep the whole law (which was impossible) or accept justification by faith in Jesus.

We then went back to Matthew 5 and I introduced the idea that most likely, Jesus wasn’t talking about eternal life anyway. The “kingdom of heaven” is not the same thing as getting eternal life, being justified, or going to heaven when you die. Instead, it probably refers to the rule or reign of heaven on earth, here and now, in the life, and in the new heavens and new earth when they come. So the kingdom of heaven is not some pie-in-the-sky, go-to-heaven-when-you-die dream of an afterlife. The kingdom of heaven can be a living reality now for people who live according to the way that Jesus outlines in his sermon. The early church seemed to have understood it this way, as in Acts 1-4, where we see them live according to many of these kingdom principles. This idea really got the group excited, and we spent the next half hour or so dreaming and discussing what this might look like in our own lives and communities.

The discussion reiterated to me once again that Jesus, as difficult as it sometimes is to understand Him, still inspires the thoughts and imaginations of all people who take him seriously.