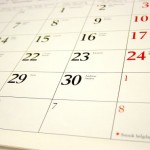 How can a church become more missional? Can we change the programs, training seminars, and conferences so they are more effective? Can we rework and tweak them? It might be possible, but I doubt it is worth the effort.

Church programs are like Government programs. They can be reworked, but only with lots of time, energy, and money being wasted. Even then, the end result is usually worse than what we started with. Attempting to retool a program is nearly always more damaging to the church and the people in the program than just flat-out cancelling the program.

I suggest that all church programs be cut. And then, before any new programs are started, stamp them with an expiration date. Generally, programs are designed to last. And they do last. They perpetually exist until the original vision and need for that program have long since died. The program becomes untouchable while at the same time, draining the church of valuable volunteers and resources. So before any new programs are started, their death should be scheduled right in. Not only will this make sure that no programs exist until Christ returns, but it will force those who design the program to think carefully about the purpose and goals of the program.

The reason most programs exist forever and ever without really accomplishing anything is because the goals and purposes were unclear from the beginning. If nobody knows what exactly is supposed to happen, there is no way to know when it has been accomplished. But if the program has a specific goal, it is much easier to accomplish and complete.

For example, many churches have a program with the goal of “feeding the hungry.” That program, clearly, will never be fully accomplished. And it’s a good program, so we can’t just kill it, can we? Not really. But what if the “feed the hungry” program did die, and instead, we started a program to “feed Jim Handley’s family for six months or until he finds a job.”

Maybe Jim Handley is a church member and maybe he isn’t. But either way, you are meeting a need, building a relationship, and hopefully, helping Jim Handley find a job is a by-product of this program. And of course, the death of the program is built in. If, after six months, Jim still doesn’t have a job, the “program” can be reassessed, but it should not be blindly continued. If he does find a job, then the successful program can be celebrated, and the families who were providing food for Jim and his family can take their exciting success into new directions.

In this way, the impending death of a program acts like the impending death of our own life. It gives us a sense of urgency to get done what we want to get done. It forces us to set priorities, and reevaluate as things proceed. It demands innovation and creativity. Also, as we saw with the Jim Handley example, if the program is successful, we can rejoice at a program well lived. But if the program fails, well, it’s still okay, because we learned in the process, and now the program is not a dead corpse that we have to drag around to every calendar and budget meeting for the next decade.

So programming your programs for death is the key to successful programs. Needs change, people change, and programs must change too. And changing a program is much easier to do if they all die.