You are here: Home / Making Reservations for the Lord’s Supper

The Lord’s Supper, or Communion as it is often called, is the second religious rite which churches would be wise to give up.

Not that we would actually get rid of it, but just as with baptism, we can look at the symbolism it had in the days of Jesus and the early church, and then find ways to resurrect and maintain that same symbolism today. So just as with the discussion about baptism, this section will progress in a similar fashion.

First, passages about the Lord’s Supper will be considered, followed by some brief suggestions for how the symbolism behind the Lord’s Supper might better be accomplished today. In this way, we are not doing away with the Lord’s Supper, but are allowing the way it is performed today to die a natural death so that it can be raised to new life and new meaning in the church today.

The Magic of Communion

Just as with baptism, the typical communion service today borders on the mystical and magical. This is especially true in some Catholic and Lutheran circles where the bread and wine inherit the actual (or spiritual) attributes of the body and blood of Jesus. I am not about to get into the complex history and debate surrounding consubstantiation (the Lutheran view) and transubstantiation (the Catholic view), except to say that both, in one way or another, see the bread and wine as becoming something more than just bread and wine, and in this way, the elements become holy and impart grace to the believer.

But let me just say this: If it is true that something mystical does in fact happen to the bread and wine during communion, then the rest of this discussion on the Lord’s Supper is pointless, and things should continue in church as they are. If however, the bread and wine (or juice) are merely symbolic (as held by most other churches), then it is valid to change or modify the symbol so that it better fits our particular time and culture.

No Real Difference among Churches

The primary problem with the way communion is practiced in churches today that believe the Lord’s Supper is a symbolic memorial is that we have adopted the practices of churches which think it is much more than a symbol but have stripped away most of the mystical significance of the elements. 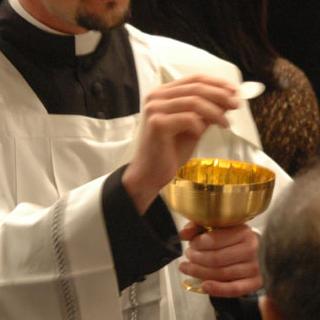 In other words, if you took an outsider and asked them to observe the communion practices of a Baptist church and those of  a Lutheran church, they would be hard pressed to discern any real outward difference. Sure, there might be a few minor differences on where and how people get the bread and wine, but other than that, the practices are pretty similar. This is because although most “Protestants” stripped the mystical substance out of their Communion observance, they left pretty much everything else exactly as it was.

In most churches, no matter what kind, the observance of Communion, the Lord’s Supper, or the Eucharist, are pretty similar. A pastor or a priest reads a few Scriptures and says a few prayers over a bit of bread and wine, and then distributes these bits of bread and wine to those who have gathered. The whole ceremony is usually quite somber and reflective.

So maybe despite all our theological differences, the practical differences are really not that far apart. Yet maybe, in actual practice, we are light years away from what the Lord’s Supper is really all about.