You are here: Home / Redeeming Scripture / Does the unquenchable fire of Matthew 3:10-12 refer to hell? 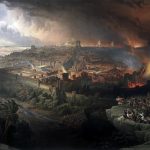 In this article, we will be discussing the topic of “unquenchable fire” as it is talked about by John the Baptist in Matthew 3:10-12 (and the parallel passage in Luke 3:16-17). 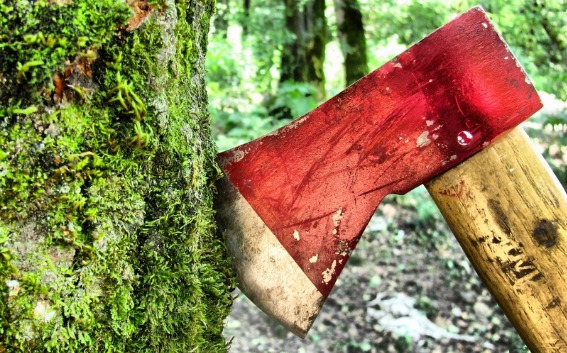 Many believe that John the Baptist is teaching about hell in Matthew 3:10-12. Here is what the text says:

“And even now the ax is laid to the root of the trees. Therefore every tree which does not bear good fruit is cut down and thrown into the fire. I indeed baptize you with water unto repentance, but He who is coming after me is mightier than I, whose sandals I am not worthy to carry. He will baptize you with the Holy Spirit and fire. His winnowing fan is in His hand, and He will thoroughly clean out His threshing floor, and gather His wheat into the barn; but He will burn up the chaff with unquenchable fire.”

This is a message from John the Baptist to the Jewish people who came to be baptized by him in the Jordan River.

The words of John are sometimes used by modern teachers who want to defend the idea that those who don’t have good works will end up in hell. They argue that all true Christians will prove the reality of their new birth by having good works.

In other words, the argument is that if someone doesn’t have the necessary good works, they will lose their eternal life (or prove they never had it in the first place) and so will end up in hell.

This misapplication of the text arises primarily from thinking that the fire John speaks about refers to hell.

But John is not referring to hell.

In the context, John the Baptist is not talking about hell, but about impending temporal judgment on the people of Israel if they fail to repent.

In Matthew 3:7-8, John warns the religious leaders that wrath was coming upon them, but they could escape this wrath if they bore fruits worthy of repentance. Scholars have always understood this as a prophecy about the destruction of Jerusalem in 70 AD.

There is no thought of hell here, but only of temporal judgment on the nation of Israel and the people who are part of it.

The references to fire in Matthew 3:10-12 must be understood in light of this context.

When John speaks of the ax being laid at the root of the tree, he is saying that the judgment is imminent.

The ruling class of Israel was often compared to a tree (cf. Isa 11:1), and so John is saying that the rulers of Israel (such as the religious leaders) will be cut down unless they repent.

Similarly, when John uses the image of the wheat and the chaff, he is describing the common practice of farmers gathering the harvest into their threshing floor where the wheat was separated from the chaff with a winnowing fan. 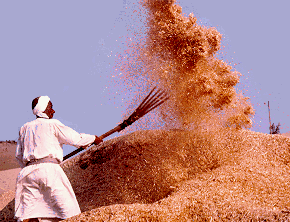 A winnowing fan was a cross between a rake and a shovel so that large scoops of grain could be tossed into the air while also creating a bit of breeze. The heavier grain would fall back to the ground, while the lighter chaff would get blown off to one side, where it would pile up against a low wall of the threshing floor.

Once the wheat and chaff had been separated in this way, the grain would be taken away for storage, while the chaff would be set on fire. Since chaff is light and insubstantial, it burns quickly, leaving almost no ash behind and very little evidence that it ever existed.

John says that this is what will happen to the Jewish leaders and those who follow their teachings if they do not all repent and turn to follow God.

This was a challenging teaching, for while most Jewish people expected God to judge the surrounding Gentile nations, few believed or taught that God would judge the nation of Israel itself.

But this is what John preached. He was speaking to them as if they were Gentiles in need of repentance.

Repentance, of course, is not a necessary condition for receiving eternal life, but is an actual turning from sin toward obedience.

We receive eternal life by believing in Jesus for it, not by repenting, or turning, from sinful activities. Such turning is extremely helpful in experiencing the blessings that God wants for us in this life. But those who do not repent will experience the devastating and destructive consequences of their sinful choices.

This is what John warns the leaders about and the nation of Israel as a whole. John uses the image of fire to refer to this destruction.

But what about being “thrown into the fire”?

When John says they will be “thrown into the fire” (Matt 3:10), he is not talking about being thrown into the fires of hell, but is using the imagery of cutting down a tree which then gets burned. Many trees are cut down and then used to make planks of wood for building and construction.

But John says that Israel’s leaders, and those who follow their teaching with a lack of repentance, will be symbolically cut down and burned. They will not be useful for anything once the judgment comes.

But what about the baptism by fire?

The baptism by fire in Matthew 3:11 is to be understood in a similar way.

It does not refer to the coming of the Holy Spirit at Pentecost, but the impending destruction on Israel.

Since baptism simply means “immersion,” when something is immersed in fire, it is consumed by the fire.

Then how about the “unquenchable fire”?

This fire will not come upon all, for John teaches that the Messiah will gather the grain into the barn, while the chaff gets burned with unquenchable fire (Matt 3:12).

This reference to unquenchable fire causes some to think that John is referring to hell. But the term “unquenchable” (Gk., asbestos) simply means that the fire completes its task. It burns all that it was meant to burn and fully consumes all that is fed into it. 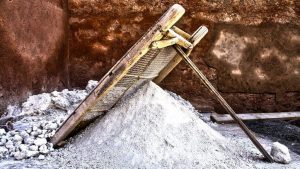 As an interesting side note, the term asbestos not only means “unquenchable” but also refers to calcium oxide (or quicklime) that was made in the lime kilns of the ancient world, which, after being slaked with water, was widely used for art and construction. When a human body is completely burned, the ash it leaves behind looks very similar to asbestos, or calcium oxide (See Isaiah 33:12).

Chaff does not burn eternally. Quite to the contrary, it burns quickly and then is gone.

So the fact that this fire is described as unquenchable means that it burns hot and fast until there is nothing left to burn. It completes its task of burning so quickly and thoroughly, there is little trace of the flames or its fuel after the fire is gone.

Eusebius, in his Ecclesiastical History (Book VI: Chapter 41), writes about a Christian named Julian who was burned to death for being a Christian. Eusebius describes this fire as being an immense fire. The Greek words he uses are puri asbestō, exactly the same words used by John in Matthew 3:12. Eusebius goes on to use the exact same term to describe how other Christian martyrs were killed.

Clearly, when Eusebius used this phrase, he was certainly not saying that these Christian martyrs went to hell. Instead, Eusebius was simply describing the immense inferno which consumed their bodies in the flames.

The bodies of these Christians were reduced to ash in the fire; not sent to everlasting torment in hell.

John’s Warning was fulfilled in 69-70 AD

This is what happened to the nation of Israel within one generation of John speaking these words. In 69-70 AD, some Jewish people tried to revolt against Rome, and in response, Rome sent its military to destroy and burn the city of Jerusalem. Its walls were torn down, the temple was ruined, thousands of people were killed, and the city was burned to the ground. The rest of the nation scattered over the face of the earth. 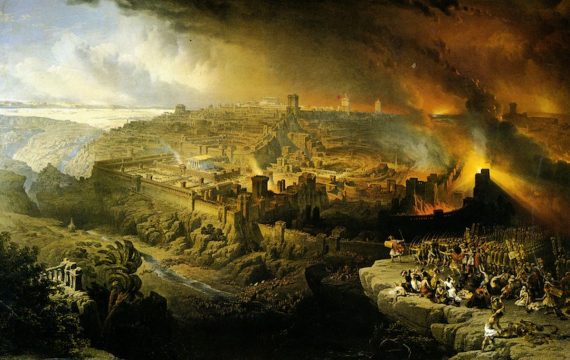 In the minds of many, the nation of Israel ceased to exist, and there was almost no trace of it to be found. It was not until 1948 that Israel was resurrected from the ashes and became a nation once again.

This unquenchable fire was not the first time that such fires came upon Jerusalem.

Jeremiah prophesied that if the people of Jerusalem did not turn from their disobedience, then an unquenchable fire would be kindled upon the gates and palaces of Jerusalem (Jer 17:27). This fire came upon Jerusalem in 586 BC when Nebuchadnezzar burned the city, destroyed the temple, and razed Jerusalem to the ground. But even though Jeremiah said the fire was unquenchable, the fire burned itself out. Many years later, the city and temple were once again rebuilt.

John follows in the prophetic steps of Jeremiah by saying that if the Jewish people do not turn from their ways, the same thing that happened to Jerusalem in the days of Jeremiah would also happen in their own day. 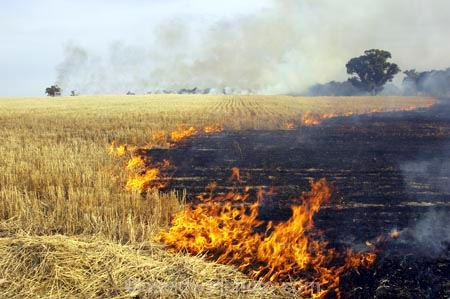 So John is not warning the people about going to hell where they will be tortured forever in flames.

He is warning the people of Israel that a fire is coming upon them, and once it is ignited, it will not be extinguished, but will burn until there is nothing left to burn.

This is not a reference to hell or the eventual annihilation of unregenerate dead, but only to the temporal destruction that would come upon the nation of Israel if they did not repent and return to God.

Throughout this text, John uses the images of pruning and burning to invite his listeners to repent and prepare their lives for the coming Messiah.

He invites his listeners to burn the rubbish out of their own lives now in preparation for the Messiah, or have it burned up later when the Messiah comes.

This is not a threat from John that the Messiah will send people to everlasting hell, but is instead a call to national repentance as a way of preparing the way for the Messiah.

As we now know, however, the nation did not properly prepare themselves, and so the Messianic presence resulted in the fires of purification (cf. Luke 12:49).