You are here: Home / Money or Friends 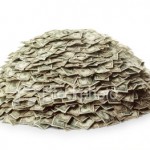 If you had a choice between the following two options, which would you choose?

I fear that most people would say they choose the second option, but when presented with piles and piles of cash, might actually choose the first. Thankfully, for most of us it is a hypothetical question. But for a man named Levi, it was an actual choice he had to make.

The decision Levi faced, however, was slightly different than I have presented it above. He already had lots of money, and was asked by Jesus to leave it all behind, and join His circle of friends. On the one hand, he could continue to be a tax collector, earning piles of money, but continue to have everybody hate him and despise him. Or, he could leave all his money behind, and follow Jesus, where there was love, and acceptance, and most of all, forgiveness.

For Levi, the choice was easy. He knew what money could and could not buy, and he recognized a good investment when he saw one. This invitation by Jesus was a once-in-a-lifetime opportunity, and he took it. He just got up, left his tax-gathering booth, all the money he had collected, his bodyguards, and started followed Jesus. 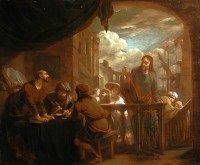 Very likely, his tax gathering booth did not stay empty for long. Although being a tax gatherer cost you your friends and family and the respect of your neighbors, it gave you great wealth, and there are always people who will do almost anything for money. In that society, just like in ours, there were men who were willing to be seen as a traitor if they could just become rich. Though tax collectors were hated, there were always people ready and waiting to become a tax collector.

So once Levi left his booth, that was like turning in his resignation. There was no going back for him. They probably had his position filled within a day. But He didn’t care. Though he had been serving money for years, and had spent his days trying to get just one more denarius, he finally found in Jesus what he had been searching for.

Maybe, many years ago, he had thought that having lots of money would give him satisfaction and fulfillment in life. Now, he had all the money he ever wanted, and he was still not happy. But when Jesus came along, and asked Levi to follow, Levi knew that Jesus was what he had been looking for. Whereas money could never fill the hole in his life, Jesus could.

The cost of leaving everything behind to follow Jesus was well worth it.

This post is based on the Grace Commentary for Luke 5:27-32.