You are here: Home / Naming the Powers 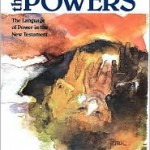 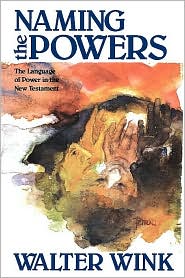 Do you want your thinking about angels and demons to be blown out of the water? Read “The Powers Trilogy” by Walter Wink.

And then read them again.

I am going to do a three-part review, one for each book in the Trilogy. This review is on the first volume in the series: Naming the Powers.

Of the three books, this one is both the hardest to read and the most important. It is hard to read because it contains a lot of the Scriptural backgrounds and exegetical research for what is written about in the other two books. Some readers might find such content dry and difficult to wade through. However, since it deals with some of the primary Scriptures about Satan, angels, and demons, this book is the foundation for the other two. If you do not read this book, you may not understand where Wink is coming from in the other two.

So the book is hard to read, but is necessary if you fully want to grasp the argument that Wink makes.

And what is that argument? It is this: The Powers, which are referred to in many different ways throughout the Scriptures, are the spirituality of institutions, the “within” of corporate structures and systems, the inner essence of outer organizations of power (p. 5, 107).

The idea requires much unpacking and explanation, but once understood, I think his definition fits quite well with our experience in life and with what we read in Scripture.

The bottom line is that every organization and institution—whether political, economic, or religious, from large corporations and entire nations to small country churches and individual households—have a “tenor” or a “way of doing things” that define, characterize, guide, and even justify the actions and attitudes of that particular structure. This spiritual dimension of a physical entity is “The Power” of that organization.

We cannot encounter these “spirits” apart from the physical entities in which they exist.

Think of it as the “mob spirit” or the “team spirit” or the “corporate spirit.” All three of these organizations have very different “spirits,” but none of them can be experienced apart from the group in which they exist.

This is not to say that these spirits do not exist. They do. They are very real. More real, in fact, than the disembodied, invisible, and undetectable spirits of much modern theology. To the contrary, these spirits are so real, they are incarnated within the organizations and institutions of everyday life. “The satanic is not an abstract force distributed equally throughout the cosmos like a gas. It is the concentrated inner spirituality of idolatrous human structures. And it is as real as they are” (p. 139).

There is great danger in this for the church. While we pride ourselves in being guided and controlled by the Holy Spirit, it may be another spirit which provides greater direction and control. Too often, in order to fight against the power-hungry and destructive spirit of oppression that governs many nations and corporations, the church has adopted the very same ideologies and methods that are used by the organization we fight against. When this occurs, whether we win or lose in the power struggle that follows, the end result is that we become just as evil as that which we fought against (p. 130). We have seen this time and time again in history. The victors become the oppressors, even when the victors are Christians.

So what is the way forward? How can we struggle against the principalities and powers without adopting their methods and goals? Well, that is the subject of the next two books, which I will review later this month.