You are here: Home / Are people “Only Evil Continually”? Calvinism and Genesis 6:5 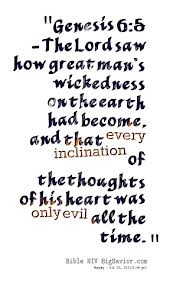 Two key texts for the Calvinistic teaching on Total Depravity are Genesis 6:5 and Genesis 8:21. Both verses state that all the intents, thoughts, and imaginations of mankind are only evil continually. Regarding these verses, Calvinistic author Edwin Palmer says this:

Note carefully the description of the wickedness. It was great. It penetrated to the deepest recesses of man. Not only to his heart, not only to the thoughts of his heart, but also to the imagination of the thoughts of his heart. Such innermost attitudes, according to the Bible, were only evil and that was continually so—all the time. Genesis 8:21 adds the information that this was not only when man was fully matured but also from his youth (Palmer, TULIP, 13).

There are numerous problems with the Calvinistic understanding of these texts.

Problem with the Calvinistic Understanding of Genesis 6:5 and Genesis 8:21

First, the texts are not statements about the sinful condition of all people throughout time, but are specifically about the people who lived at the time of the flood.

Second, the statements in these verses are not saying that men are inherently wicked in everything they do, but that the people at that time became wicked in everything they did. This is seen in part to the mysterious pairing of the sons of God and the daughters of men in Genesis 6:1-4, but also to the fact that when the evil intentions of mankind is described, it is their violent actions that are specifically mentioned (Genesis 6:11-13).

The truth that humanity became evil is further supported by the Hebrew word for “intent” (Heb. yetzer) in Genesis 6:5 and “imagination” in Genesis 8:21 is the same word used in Genesis 2:7, 19 to describe how God “formed” man from the dust of the ground. The point is that just as God formed man to be good, now man is “forming” his thoughts and his actions to be only evil. Humanity was not evil inherently, but was forming himself to be evil continually.

Furthermore, if Genesis 6:5 meant that mankind had always been evil continually (since the fall of Adam and Eve), there would be no explanation for why God was only now upset at their evil, and was only now acting to stop the spread of violence upon the earth (Genesis 6:6-7).

Then there is the problem of Noah himself. Though the proponents of Total Depravity claim that Genesis 6:5 and Genesis 8:21 describe all of humanity all the time, Genesis 6:8-9 and 7:1 indicate that Noah was perfect in his generations and righteous before the Lord, and so was not subject to the depravity, evil, and violence that had covered the earth.

Though Calvinists may claim that Noah was only “perfect in his generations” because of God’s irresistible grace upon Noah’s life, the text of Genesis 6:8 indicates that “Noah found grace” in the eyes of God, not that God irresistibly gave grace to Noah.

It should be pointed out that there are some who argue that the righteousness of Noah had nothing to do with morality, but with the purity of his bloodline. The evil and violence that had come upon the earth, it is said, was a result of the pollution of the human race by the “sons of God” in Genesis 6:1-4. In this case, the fact that Noah was “perfect in his generations” (Genesis 6:9; cf. 7:1), does not mean that he was holy and faithful, but that the bloodline of his ancestors had not yet been corrupted by intermarrying with the “sons of God” (whatever they were) or their offspring, the Nephilim (again, whatever they were).

This post has briefly considered what Genesis 6:5 and Genesis 8:21 do not mean. In tomorrows post, we will look at how properly understand these two verses in their contexts, and what they teach us about the human condition. Until then, what are your thoughts about these verses? Do they teach Total Depravity as Calvinists claim?