You are here: Home / Is the Flood Account a Beautiful Story about Rainbows? 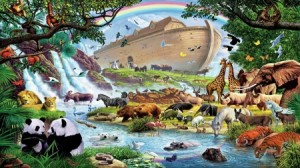 Of all the violent texts in the Old Testament, the portrayal of the flood in Genesis 6–8 may be the most difficult text to understand.

As I was struggling with the way the flood is presented in Scripture, I had frequent conversations with my wife about this troubling text. One night, as we went back and forth on how to understand this passage, she playfully said, “I don’t know what the flood story means! All I know is what I was taught in Sunday school, that it’s a beautiful story about rainbows!”

We laughed, but the tragic reality is that this is what most people think about the flood. It is often read and taught sort of like an old-wives tale about how rainbows came to be.

The Flood Story is Appalling

The flood story, however, is anything but a beautiful fairy tale. On its surface, the flood story is an appalling account of how millions (and possibly billions) of people died a horrible death by drowning because God was angry at them. 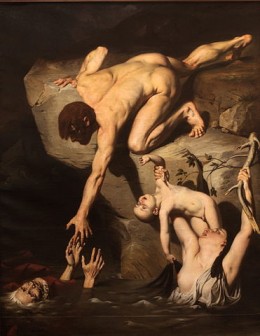 Aside from the grim image of every living thing on earth gasping for breath and choking on water as they sink beneath the waves, the flood story also paints a troubling portrait of a God who seems incompetent because He regrets that He made mankind (Didn’t He know this would happen?), and who then foolishly tries to solve the world’s addiction to evil and violence by committing the greatest atrocity of all: worldwide genocide. One author describes the story with these words:

The Old Testament also describes God as a mass murderer. …Despite cute songs, child-friendly play sets, and colorful artistic renderings of the story, “Noah’s Ark” is not a happy tale of giraffes and panda bears clambering aboard a floating zoo. It is a story of catastrophic death and destruction that, incidentally, results from divine decree. Nearly the entire human population perishes because God drowns them. It is a disaster of such epic proportions that even some of Hollywood’s doomsday scenarios pale by comparison (Seibert, Disturbing Divine Behavior, 20).

Strong words! Yet the apparent genocidal behavior of God in Genesis 6–8 is not the only troubling element to this text. Although there is a rainbow at the end and a promise by God that He will never do such a thing again, one is left with several questions about the way God is presented in this text.

The Troubling God of the Flood

For example, if He can promise that He will never do it again, why did He send the flood in the first place? Did He realize the flood was a mistake? If so, He sure seems prone to mistakes, for He first regretted making mankind, and then He regretted killing them all. So is God schizophrenic? Is He bi-polar? Did God realize the flood didn’t work as intended, and that mankind would not learn to refrain from evil simply because God annihilated them all? Maybe He realized this isn’t the example He wanted to set for mankind, and so resolved to be a nicer, gentler, more merciful God in the future? Was the flood “Plan A” and when the violent drowning of all mankind didn’t work, God decided to go with “Plan B” in eventually sending the Messiah?

None of this sounds like any God we read about in Scripture. If He had any foreknowledge at all (as God does), He would have known that the flood wouldn’t stop humans from committing evil. So what was the flood supposed to accomplish? Since it didn’t “work,” it seems like nothing more than gratuitous evil on the part of God, or at the bare minimum, some sort of childish temper-tantrum when the people He created stop doing what He wants. He creates humanity. They sin. He gets upset. So He kills them all.

Then after everyone is dead, He says He is sorry for getting angry, and asks us to love Him anyway. And look! Here’s a beautiful rainbow to prove how much I love you!

Imagine a man got angry because his children didn’t obey him, and so he drowned them all in a bathtub. When his wife showed up, he says, “I’m sorry I did that. I promise not to do it again with our future children. And to prove it, here’s a bouquet of roses!”

Do you think she’s going to be too eager to go make more babies with him? No, most likely not.

People will object, of course, that in this post I painted a caricature of God that is not actually present in the text. If you think so, just find an atheist friend and have them read Genesis 6–8 and ask what they think of the way God is presented in these chapters. Check out this picture to see what I mean: 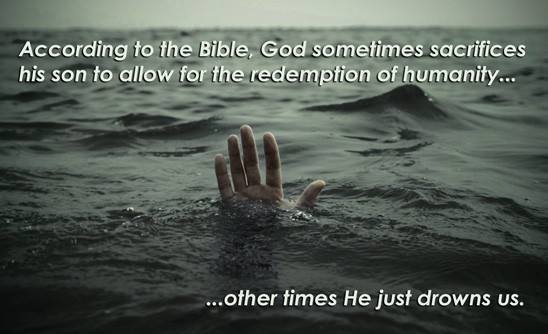 We Christians too often read the Bible with blinders on. We think that since God is God, He can do what He wants. The problem with our Christian way of reading this text is that at the end of the flood account, God Himself recognizes that what He did was so wrong, He will never do it again (Gen 8:21). If God is God and can do what He wants, and so it was okay for Him to send the flood, why would God promise to never send another flood? If it is okay for God to do it once, isn’t it okay for Him to do it a second time, or a third time, or however many times He wants? If it is true that “God is God and can do whatever He wants” there is no good explanation for why God decides to never send another flood.

The reading I propose in the following posts, however, will give an explanation for God’s statement in Genesis 8:21 and will show that under the surface of this troublesome and tumultuous text, the flood account truly is beautiful story about rainbows, just as my wife said.

In the events surrounding the flood, we will see a God who looks surprisingly like Jesus Christ.