You are here: Home / The Parable of the Talents Revisited 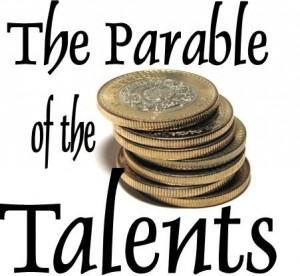 Typically the Parable of the Talents in Matthew 25:14-30 or Luke 19:11-27 is thought to teach that we must use what God has given us in ways that will multiply these gifts for God, and therefore, grant us eternal reward from Him in heaven.

I have taught it this way for most of my life, and this is the basic message you will get from most pastors and most Bible commentaries as well when explaining the Parable of the Talents.

The Parable of the Talents Summarized

In the Parable of the Talents (in Matthew 25:14-30 anyway), the first servant turned his five talents of money into ten, the second turned his in to four, but the third hid his talent in the ground so that he would not lose it. We are instructed to be like the first servant, or at the bare minimum, like the second, but we should avoid at all costs being like the lazy, unprofitable third servant.

I now believe that this interpretation of the Parable of the Talents is completely opposite of what Jesus meant. Let me explain…

Money in an Honor-Shame Culture

We live in a materialistically-driven culture, governed by greed and the accumulation of stuff. The Bible was written in an honor culture, where stuff and money didn’t matter. In an honor-shame culture, people want honor. Money is not a end, but a means to an end. Money and wealth is one way to gain more honor.

In an honor-shame culture, someone might be insanely rich, but if they had no honor, they were not well-liked or respected.

Furthermore, honor-shame cultures typically believe that wealth and possessions are in limited supply. They believe in a zero-sum economy. In other words, if one person gained wealth, it was only at the expense of someone else. The only way someone could accumulate wealth is if they took it from someone else. The rich get richer only at the expense of the poor, which, in an honor-shame culture, was an extremely shameful way to live. This is one reason why honor-shame cultures had so many “Patrons.” As the rich accumulated wealth, they saw it as their duty and responsibility to give this wealth back to society in the form of music, arts, schools, hospitals, and other such humanitarian works. This way, the wealthy gained greater honor, but not necessarily greater wealth.

The Parable of the Talents Revisited

Once we re-read the Parable of the Talents through this cultural lens, the entire passage get turned around.

In our materialistic, economic-driven culture, the heroes are the servants who accumulate more stuff. But in an honor-based culture, the people who accumulate stuff are the villains. Why? Because the only way they were able to get more stuff was by taking it from someone else. The hero of the story if the third servant, who did not become richer, but instead was content with what he was given.

The third servant in the Parable of the Talents was so content, he didn’t even put his one talent in the bank to collect “interest” (read “usury”). The master gets mad at this third servant and tries to shame him by taking away (read “stealing”) his possessions and giving it to the one who is already rich. This again is shameful behavior on the part of the master, but it explains why two servants behaved in such shameful ways — they have a shameful master.

I know this is a challenging way of reading the Parable of the Talents, because we are typically taught that the master represents Jesus, and that when He returns, each of us must give an account to Jesus for how we used the time and money He has blessed us with.

Obviously, in this alternate way of reading the Parable of the Talents, since the master behaves shamefully and teaches his servants to do the same, the master cannot represent Jesus.

So who does the master represent? The master represents the god of this age, the one who teaches models and the morally reprehensible behavior of stealing from the poor to make themselves rich. Jesus is teaching that this is the kind of behavior Christians can expect from the world when we try to live according to His new code of honor ethics.

There are, of course, objections to this view of the Parable of the Talents.

No, actually. If you look in a normal Bible, the words “the kingdom of heaven is” are in italics, which means they are not in the original. Jesus didn’t say these words; our translators added them! The reason the translators did this is because they thought it was a parallel story to the parables that come before and after the Parable of the Talents, but it is just as likely that the middle parable is set in contrast to the surrounding parables.

This is especially true when we read the text with new eyes and see hints of something else going on. For example, the master went into the “far country,” which is where the prodigal son went, and which represents life apart from fellowship with God.

In Luke’s account the message of the Parable of the Talents (Minas in Luke) is even more clear since it immediately follows the story about Zacchaeus, who is the perfect example of a man who became rich by robbing and stealing from the poor. Is Jesus a greedy tax-collector like Zacchaeus? Of coruse not! Yet if the traditional interpretation of the Parable of the Talents (and Minas) is accepted, Jesus had no right to tell Zacchaeus to give back the money he had received by doing his job (there was nothing illegal about what Zacchaeus did). Instead, Jesus should have praised Zacchaeus for being a good steward of his money. But Jesus told Zacchaeus to regain his honor by giving away his wealth.

Furthermore, the final statements of the Parable of the Talents has the master demanding that his enemies be outcast and killed. Again, this does not represented something God will do, but foreshadows what will happen to Jesus Himself and those who follow Him when they stand up to the god of this age because “they do not [him] to rule over them” (Luke 19:27). This master wants his enemies slain before him. Immediately after this, Jesus sets his face toward Jerusalem where He knows He will be killed (Luke 19:27-28).

When he arrives in Jerusalem, one of the first things Jesus does is clear the temple of those who were using it to enrich themselves by stealing from the poor (Luke 19:45-48). As a result, the wicked “servants” of the temple seek to destroy Jesus (Luke 19:47).

I could go on and on about the Parable of the Talents and how this alternative reading of this parable makes much more sense in context and in light of the complete message and ministry of Jesus. If you want to learn more, here is one resource which talks about this perspective, and many similar themes as well:

One of the many books which has helped me in this area is the Social-Science Commentary on the Synoptic Gospels by Bruce J. Malina and Richard L. Rohrbaugh. If you want to understand the gospels, go buy this commentary. The “reading scenarios” at the end of the book are more than worth the price of the book. The commentary has rocked my world and allowed me to see and read the entire Bible in a whole new light. If we want to understand the Bible, we need to read it as it was written, not as we want it to be read.