You are here: Home / The Right to Life

In this series about  Giving Up our Rights, the first right we want to look at is the right to life. Is this really a right promised in Scripture and compatible with the Gospel of Jesus Christ?

No one can deny that all people desire and deserve life. It is for life that God created this world, and it is through life that we glorify God. Even those who live without God know all people deserve life, which is why the penalty of death is reserved for our worst criminals.

And murder, which is wrongfully taking the life of another, is viewed by all cultures as one of the worst crimes that can be committed. So it is natural and normal to claim our right to life.

The Cost of Demanding our Right to Life 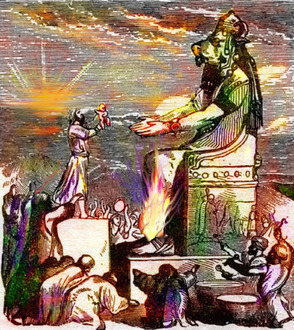 Problems arise, however, when in our attempts to maintain and preserve our life, we fail to recognize the source of all life, namely God, and that because all life derives from Him, every other person on this earth has just as much of a right to life as we.

Divorced from God, an individual’s right to life can lead them to kill and destroy the lives of the innocent, the weak, the poor, the voiceless, and defenseless. Thousands of people are killed through genocide or war when one person or one group of people decide that the way they want to live their life requires the death of others.

There are numerous examples of this, but one main practice comes to mind, especially since it is so prominent in our culture today: the sacrificing of our children in the name of business and success.

In ancient times, people would lay their infant babies in the fiery red-hot hands of the god Molech, in the belief that Molech would give them prosperity in their business, crops in their fields, and success in life.

Similarly today, we sacrifice our children through abortion and neglect as we strive after success in business and the next big promotion. We have a plan for our lives and far too often, children get in the way. Do not children also have a right to life?

The Church’s Collaboration with Death

I fear that in many ways, the churches collaborate in this terrible practice of killing others for the sake of a few to live as they please. While some churches do speak against abortion, we usually also condemn the single mothers or young couples who feel that abortion is the only way out of a difficult situation.

It is so much easier to condemn the mother for aborting her pregnancy, when in reality, churches are often guilty of helping set up conditions in which the mother feels she has no choice but to abort. When a young woman gets pregnant out of wedlock, rather than come around her in love and support, with promises to protect and provide, we more often than not cast her out like a sheep among wolves.

The same goes for drunkards, drug addicts, and prostitutes. Rather than judgment and rejection, which essentially amounts to condemning them to death, what should our response be to these men and women?