You are here: Home / Redeeming Scripture / A Theological Shibboleth about the Violence of God

Do you know what a Shibboleth is? You might have heard the term and not known where it comes from…

Anyway, that is the origin of the word Shibboleth.

I recently stumbled across a theological Shibboleth regarding the violence of God in the Bible. Almost everybody claims to believe that God is love, that Jesus reveals God to us, and that God does nothing but that which is merciful, kind, and gracious. And yet there are vast numbers of Christians who believe that God commands people to slaughter others, that God drowned people in a flood, and that God is the one who killed His own Son on the cross to appease His own wrath and anger against human sin.

Yesterday I was reading the Gospel of Luke and read Luke 12:5. I did a double-take on the verse because while the pronouns are capitalized in the Bible I was reading, it sure seemed to me that Jesus was not talking about God, but about Satan. Here is the verse (without capitalization):

But I will show you whom you should fear: Fear him who, after he has killed, has power to cast into hell; yes, I say to you, fear him!

The shibboleth is this: Is Jesus talking about God or Satan in Luke 12:5?

If you check most modern commentaries, they will tell you that Jesus is talking about God. Some argue that the verse refers to Satan. During the first 300 years of the church, it was almost exactly opposite. Many of the early church fathers believed Jesus was talking about Satan, but a few thought He was referring to God.

But what do you think? In Luke 12:5, is Jesus talking about God or Satan?

In the comments below, please feel free to state you opinion, and then also state why you believe what you do about Luke 12:5. And I promise, that whether you answer “God” or “Satan” (Shibboleth or Sibboleth), nobody is going to kill you!

Whose name tag goes on that verse? 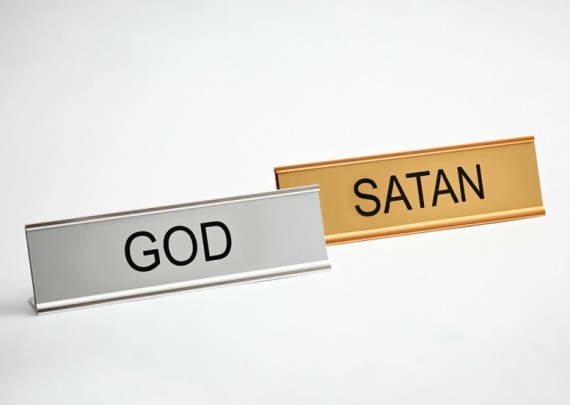 After all, why would Jesus say that God kills when He later says that it is the thief who comes to steal, kill, and destroy (John 10:10)? Why are we called to fear God when John tells us that there is no fear in love for perfect love casts out fear (1 John 4:18)? And is it really God who casts people into hell, or is He rather working to rescue people from hell?

2017 UPDATE: After further study and discussion with people in the RedeemingGod.com discipleship group, it is interesting to note that the word for “hell” is Gehenna, which is the smoking trash valley outside of Jerusalem, and the word for “destroy” is appolumi, which is used in Matthew 10:6 in reference to the “lost” sheep of Israel, and then also in 10:39 (cf. 16:25) when Jesus says if you “lose” your life for his sake, you will find it. So other forms of the word can refer to “lose” or “lost.” Notice later that the Jewish leaders plot how they might “destroy” Jesus (Matt 12:14; 27:20). This sort of seems to indicate that other human beings might be in view … but if so, Jesus would be saying “Don’t fear human beings who can take your life, but do fear human beings who can cast you into the burning trash pile outside of the city.” How does this make sense?

Maybe the key is the word “soul” (psuche) in the context, which is not the “eternal principle of a person” but is instead the “life.” That is, your “life” here on earth. Who is it that can destroy your body AND your life by sending you out into the burning trash pile? Only one group: The religious leaders. They often sent people to live in Gehenna. It was one of the places where lepers and outcasts were sent. But how is this worse than being killed?

We have two contrasts here: