You are here: Home / Tithe 3 Percent to your Church 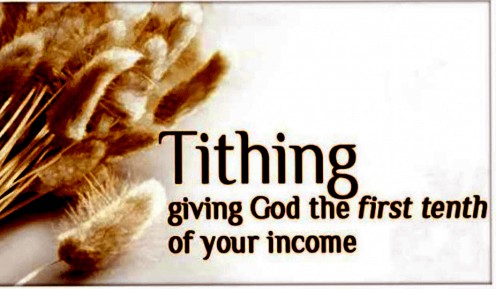 Yesterday we learned that in the Mosaic law, the Israelites were instructed to tithe 10% of their income for the purpose of having a family celebration. But does this mean then that there is no such thing a tithe to the Levitical priests, or to ministries in our own day? No. Yesterday I only told two-thirds of the story.

What about the Priests?

What about giving to the Levitical Priests? Well, they also were invited to join the party and eat and drink as much as they wanted (Deut 14:27). But the tithe was not for them, but for the families who brought them, to celebrate and enjoy life together with God.

Now, this is what they were supposed to do for two years. For two years, the entire tithe went for these family celebrations. On the third year, however, things changed. On the third year, the people of Israel were supposed to forego the celebration, and on this year, give the total tithe of crops and animals to the Levitical priests and to the poor, the orphans, and the widows in the community (Deut 14:28-29; 26:12-14).

Furthermore, this tithe paid to the Levitical priests and the community poor was not a tithe from the total number of the flock and herd, nor was it even ten percent of the total number of newborns. Instead, according to Deuteronomy 12:17, it was only a tenth of the firstborn from the flock. Every female animal only has one firstborn. After that, no other calf or lamb was a firstborn.

All of this paints a radically different picture about tithing than we are ever taught in church.

First of all, the tithe only goes to the priests every third year. During the first and second years, the tithe was still collected, but it was to be spent by the family itself for a family celebration. It was not given to the priests.

Finally, this tithe from the third year did not go to the Levites only, or even for the needs of the tabernacle, but was to be shared with anyone in the community who had need.

Doesn’t this put tithing in a whole new light? Doesn’t this seem like tithing you could get excited about? Tomorrow, we will look at some practical suggestions on applying this sort of “tithing” today.