You are here: Home / Water and Spirit Baptism in Acts 2

Prior to the events in the book of Acts, most Jewish people believed that God was the God of Israel only, and that if the Gentiles wanted to worship the one true God, and enjoy the benefits and blessings of being the people of God, they needed to convert to Judaism and follow the Law of Moses. Even the disciples of Jesus believed that this was God’s plan for worldwide redemption.

The Hebrew Scriptures and the teachings of Jesus, however, reveal that God is the God of all people, and that all are welcome within their own nations and their own cultures to join the universal people of God. This idea is one of the primary truths that the book of Acts attempts to reveal. God is not the God of Israel only, but is the God of the entire world.

The book of Acts reveals that the Gospel invitation is for people of every tongue, tribe, and nation to fully participate in the Kingdom of God.

This theme is presented by Jesus to the disciples during the forty days after His resurrection and before He ascends to heaven. Jesus told them to wait in Jerusalem for the baptism of the Holy Spirit, which would be different than the baptism of John (Acts 1:5). When they were baptized with the Holy Spirit, they would receive power to be His witnesses in Jerusalem, Judea, Samaria, and to the rest of the world (Acts 1:8).

The Coming of the Holy Spirit at Pentecost 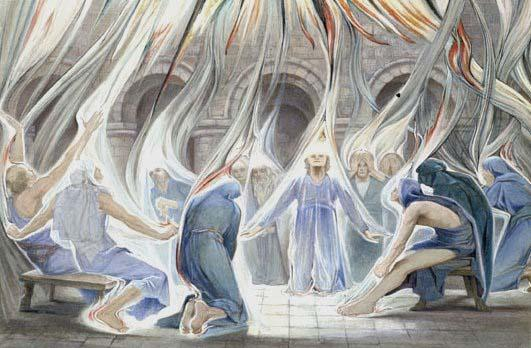 So they wait and they pray, and on the Day of Pentecost, the Holy Spirit comes upon them as a roaring, rushing wind, appearing as tongues of fire upon each person. And if the sound and the fire were not enough, many of the disciples were enabled to speak in other languages (Acts 2:3-4). This ability was given to them so that they could speak the Gospel of the Kingdom of God to the Jewish people who had gathered in Jerusalem from all over the Roman Empire for the Feast of Pentecost (cf. Acts 2:5-12).

When these travelers heard what was being said in their own language, they wondered what was going on, and so Peter tells them all about Jesus, His death and resurrection, and how He is the promised Messiah of Israel (Acts 2:14-36). After hearing his message, the gathered crowd of Jews ask what they should do in response, and Peter invites them to repent and be baptized in the name of Jesus Christ and receive the gift of the Holy Spirit. And about 3000 Jewish people responded (Acts 2:38-41).

When Peter invites them to be baptized in the name of Jesus Christ, the terminology he uses is nearly identical to the terminology used by John the Baptist. Both John and Peter called the Jewish people to repent and be baptized for the remission of sins (cf. Luke 3:3 and Acts 2:38). The topics of repentance and the remission of sins are huge issues within Christian theology, but just as with baptism, these topics are severely misunderstood by Christians when we divorce them from their historical and cultural roots within Judaism.

We will look more deeply at the concepts of repentance and the remission of sins tomorrow.