You are here: Home / When the Fullness of Time Had Come 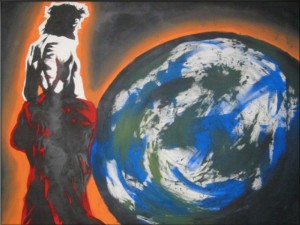 Some people wonder why Jesus came when He did. Why not earlier … or later? I have tackled this question in previous posts, but as I continue to research and write my book When God Pled Guilty, I came across an interesting observation and idea about the timing of Jesus’ incarnation.

I believe God’s timing in sending Jesus has something to do with God’s ultimate plan of redemption for the world.

Just as there is progressive revelation in history, so also, it seems that there is progressive redemption. In the beginning, God did not reveal everything there is to know about Himself or His plan for the world. With each successive generation, He revealed more and more of Himself, so that over time, a broader and more accurate understanding about God’s character and nature was revealed.

So also with God’s plan of redemption.

The Old Testament saints knew very little (if anything) about how God planned to send His Son to die on a cross for the sins of the whole world, but when the right time had come, this further revelation and further act of redemption is exactly what God did in Jesus Christ.

Though it may be true that in times past God bore the violence of His people upon Himself, the fullness of time had come for God to reveal that this was not the ideal situation—either for Himself or for us. Though God is happy to bear our sin and shame, His ultimate goal is to deliver us from evil completely, and for that to happen, we must understand where the evil and violence comes from—not from God, but from our own hearts. “Without ever seeking to limit human freedom, and without ever allowing revelation to become constraining or coercive Christ guides humanity toward divine truth” (Girard, The One By Whom Scandal Comes, 44).

Jesus did not come to lay another plank on the deck of religion. No, Jesus came to do away with religion, and especially, the religion of violence which is at the core of all world religions.

Jesus is not there in order to stress once again in his own person the unified violence of the sacred; he is not there to ordain and govern like Moses; he is not there to unite a people around him, to forge its unity in the crucible of rites and prohibitions, but on the contrary, to turn the long page of human history once and for all (Girard, Things Hidden Since the Foundation of the World, 204).

When Christ is revealed in the flesh, it is because the fullness of time had come for Him to be revealed to the world, not just as true God, but also as true man. Jesus came, not just to reveal God to us, but also to reveal us to us. It is in the revelation of Jesus that we learn some critical truths about God and about ourselves.