You are here: Home / All War is Holy War

One of the great lies that humanity has believed is that every war it engages in is a war for the good, a war for a righteous cause, a “just war.”

And yet it is often these wars to defeat evil which result in a vicious cycle of even greater evil and violence. Nobody goes off to war thinking they are about to carry out evil. Countries go off to war to defend their cause, protect their people, enforce their liberties, and safeguard their interests in the world. People say that war should be waged unless it has a just cause, but every person who wages war believes his cause is just.

It could be said that every war is a Holy War. 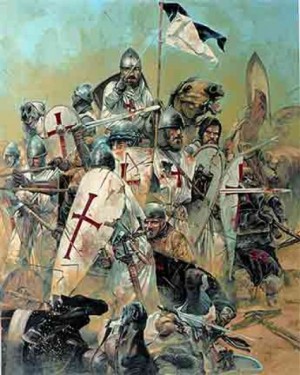 In fact, other than some recent wars produced by atheistic som, most wars throughout history have been fought in the name of god. When men march off to war, it is with prayers on their lips that their god will see the righteousness of their cause against the unrighteousness of the evil enemies.

I am reminded of a recent war fought by the United States in which millions of people around the country prayed that God would bless America as we fought against the “Axis of Evil” in the Middle East. Then we sat glued to our television screens as our military rained down fire and brimstone upon our enemies in the form of “shock and awe” missile attacks.

Even today we use God’s name to justify our own violent actions toward people we perceive as enemies. Violence attributed to God is thus seen as the source and seed of all violence. Therefore, violence will not cease until God stops being violent.

Ironically, God was never violent. We made God violent so that He could be used to justify our own violence and bless us as we marched off to war with His name on our lips and our swords.

So again, it circles back around to Jesus. Jesus did away with the entire concept of Holy War by showing us what God is really like.

God is not murderous and bloody. He is not violent. God is loving, patient, kind, forgiving, merciful, and just. And if there is violence, He would rather bear that violence upon Himself than lash out in violence toward others. Rather than attempt to defeat violence with greater violence, God takes the blame for violence and suffers the consequences of it. On the cross, Jesus does away with war and religion, and most importantly, the marriage of the two in Holy War.

And when Jesus taught us about war and violence, a surprising truth emerges, which turns out to be not so surprising at all, just overlooked.