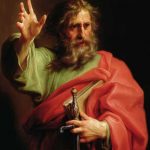 The following study of Galatians 1:8-9 is drawn from my Gospel Dictionary Online Course, which defines 52 key words of the Gospel, and considers hundreds of texts from the Bible related to these key terms. See details at the bottom of this article for how you can take the entire course. Here is a video that provides the basic answer to what Paul is saying in Galatians 1:8-9.

In Galatians 1:8-9 Paul calls down anathema on any person or teacher who presents a different gospel than the one he himself taught when he was among the believers in Galatia. Paul is so emphatic he says this not once, but twice in these two verses.

The Galatian believers have abandoning the gospel of grace which Paul taught to them, and have instead turned to a gospel of works, which is no gospel at all (cf. Galatians 1:7). So as Paul sits down to write this letter of correction to the Galatians, he begins in Galatians 1:8 by saying that anyone who preaches something different than what he preached, let them be accursed; let them be anathema. 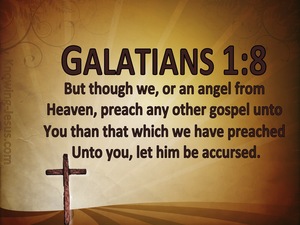 Christians have used Galatians 1:8-9 to justify cursing others to hell

These two verses by Paul have caused so much bad behavior by Christians over the years.

In more recent years, it is not at all uncommon to hear some Christian go around pronouncing curses and condemnation on people, and when you challenge them about their unloving behavior, they quote Galatians 1:8-9 and say, “Paul cursed people for the sake of the gospel; so can we.”

What did Paul mean in Galatians 1:8-9 when he announced an anathema on others?

You are about to learn that this way of reading Paul’s message in Galatians is completely wrong. I will show you a key to understanding Galatians that will allow you to read the Galatians in a whole new light.

You will not only understand the book more than ever before, but will also smile a little bit when you read his anathemas here in Galatians 1:8-9. You will understand why Paul states this anathema twice in these verses, and why we can never, ever, ever curse or condemn people who disagree with us, because, as we will see, that is not what Paul is doing either.

While it is tempting once again to see in these statements a vindictive Paul calling down a death curse upon his theological opponents, we must understand that such behavior does not fit the wider thought and theology of Paul.

What Paul writes in Galatians 1:8-9 must be understood in light of the wider context of this letter as a whole.

Galatians 1:8-9 in the context of Galatians

Because that is what Paul was doing when he wrote this letter. If you can read Galatians with the idea that Paul was writing with a somewhat sarcastic, or ironic, tone of voice, the letter will make a whole lot more sense to you.

Oh, and by way of fair warning, the explanation of Galatians 1:8-9 below is rated PG-13. 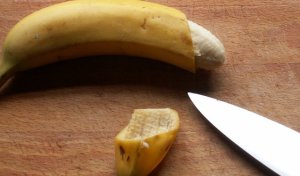 Let us begin by looking at a later “curse” that Paul pronounces on the teachers in Galatia with whom he disagrees.

In Galatians 5:12, Paul states his wish that those teachers who make circumcision a requirement for new believers would just go ahead and emasculate themselves entirely. Paul’s theological satire is quite evident. The teachers in Galatia were arguing that if believers in Jesus really wanted to please and obey God, faith in Jesus was not enough; men needed to also get circumcised.

So in Galatians 5:12, Paul, with a little smirk on his lips, argues that if God is pleased with us when men cut off part of their penis, maybe God will be even more pleased if men cut off the whole thing!

You have to love Paul, for only Paul can use a penis to make a theological point.

But what exactly is that point?

Well, the issue of circumcision is not just about pleasing God. The issue is much larger. 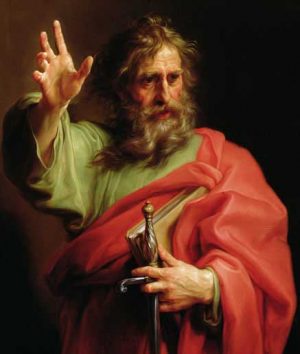 So when certain Christians in Galatia began to make circumcision a requirement for fellowship once again, Paul saw it as a return to divisions and a rebuilding of walls. This was to live not according to the Spirit but according to the flesh (Gal 5:16-26), especially since, in more ways than one, circumcision was of the “flesh.”

The factions, divisions, and lusts that were present in the community were further signs that some in Galatia were living according to the flesh rather than according to the Spirit. The pressure to get circumcised was creating an atmosphere of some men comparing his “flesh” to that of others to see who was more spiritual.

But such comparisons are not spiritual, but fleshly. To put it bluntly, Christians were comparing dicks to see who was more spiritual. Paul’s criticism is that the entire argument is “fleshly” and he wants it to stop. For Paul, this whole argument is ridiculous.

The opponents, after all, whoever they were, were seeking to establish a way of being, a grand story, a form of knowing, a type of identity, upon the converts. The pressure to get circumcised was precisely an insistence on establishing one kind of ethnic or para-ethnic identity over against others. Paul deconstructs these claims, showing that they themselves are dehumanizing, based on “the flesh.”

It really is quite a humorous argument when understood.

Paul’s letter to the Galatians has a whole different feel if you understand that Paul wrote it with a smirk instead of a scowl.

Paul had a sense of humor after all!

Paul is writing about “the flesh” in Galatians

The “flesh” (Gk. sarx) is the word used to translate the Hebrew word for “flesh” (basar) which is often used in the Hebrew Scriptures as a euphemism for the male sexual organ.

This understanding gives us a completely different reading of Galatians 1:8-9, especially when we remember that the word anathema is exactly equivalent to the Hebrew concept of cherem. In Israel, only outsiders were under cherem, and circumcision was one of the defining characteristics used to separate the insiders from the outsiders. This is why it was so important for all male Israelites to get circumcised before they entered into Canaan (Joshua 5:3-7).

Yet in Jesus Christ, all of these divisions and separations had been done away with and set aside. 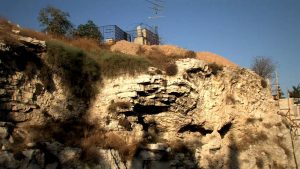 Paul’s message in Galatians is that Golgotha has done away with Gibeath-haaraloth, the hill of foreskins (Josh 5:7).

There is no longer any “us vs. them” or “insiders vs. outsiders.” Paul is now saying if we demand circumcision, we are only going back to that old way of dividing the world between insiders and outsiders.

But the reality is that, through Jesus, we are all insiders. The only real outsiders are those who claim that they are insiders and everyone else is an outsider. If you do that, then you are an outsider, and this places you under cherem, under anathema.

When Paul introduces his letter to the Galatians, he is not calling down judgment and condemnation upon his theological opponents. Instead, he is saying that if they are right in what they teach, then we must go back to the old way of dividing the world, and if we do that, then they will be cherem, anathema. Nobody wants that, including Paul, so he calls them to return once again to the gospel he preached to them, which is the gospel of inclusion and embrace.

Paul closes out his letter with a call for peace and mercy (Galatians 6:16) and that we “do good to all, especially to those who are of the household of faith” (Galatians 6:10).

We must not think that Galatians begins with a curse ends with a blessing.

Paul has been blessing his readers all the way throughout, while using irony, sarcasm, humor, and even sexual innuendos to point out the error of their ways. 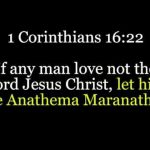 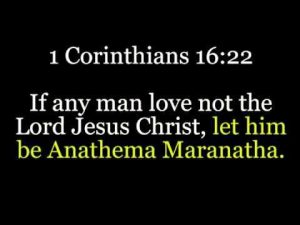 In my Gospel Dictionary course, one of the words we look at is the word anathema, which is often translated as “cursed” or “accursed” in the Bible. One of the places this word is found is 1 Corinthians 16:22, where, at the end of his letter, Paul writes this: “If anyone does not love the Lord Jesus Christ, let him be accursed.”

On first glance, this sounds like a rather harsh statement, even coming from Paul. Is Paul really pronouncing a death wish on all who are not Christians and do not love Jesus?

Such a sentiment seems so unlike Paul, and yet of all the words in 1 Corinthians, these are among those he claims to have penned himself (1 Cor 16:21). The rest of the letter was dictated to a scribe (or amanuensis).

It is the final word of this statement in 1 Corinthians 16:22 that helps sort out Paul’s words.

In English, it says “O Lord, come!” but the Greek is maranatha (which is actually Aramaic).

The final two words of this verse sound like this: anathema maranatha. You can very clearly hear the repeated sound of anatha in both words. And of course, one word ends with ma while the other begins with ma.

So what we have in 1 Corinthians 16:22 is a typical Pauline play on words. Paul, more than any other New Testament author, loved to make theological points through word play.

In Philemon, for example, Paul uses the words achrēston (useless) and euchrēston (useful) as a way of making a point about Onesimus (whose name means “Useful”) and his relation to Paul and Philemon in Christ (Christos).

A play on words helps us understand 1 Corinthians 16:22

Paul knows that some of the Christians in Corinth have been saying that Jesus was accursed (We we discussed previously in our discussion of 1 Corinthians 12:3). 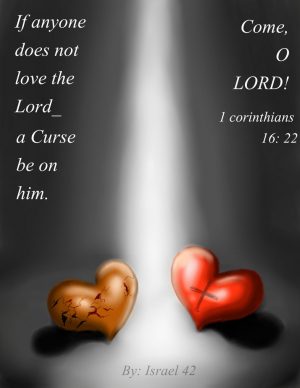 So he now makes the ironic and pun-filled statement that we have a choice between anathema and maranatha.

One can either look eagerly for the Lord’s coming, maranatha, and so reveal their love for Jesus Christ, or one can believe that Jesus was anathema, and therefore want nothing to do with Him and so be anathema themselves.

Those are the choices which Paul masterfully, ironically, and playfully lays out here at the end of this letter to the Corinthian church.

But even still, being anathema is not about being cursed to hell. That is not what the word means. I discuss the meaning of the word more (along with 51 other words and various passages related to each) in my online course, “The Gospel Dictionary.” Start taking the course today and learn along with others.