The following post contains a proposal about how to understand the violence of God in drowning the Egyptian army. I am publishing it for your input and feedback. I think that maybe what I have presented is a bit of a stretch, but if I am going to maintain some bit of sense of the inerrancy of this text, I can see no other way of reading about the drowning of the Egyptian army in Exodus 14 through the lens of Jesus Christ dying on the cross for His enemies.

In other words, the question I am trying to answer in this post is this: “Why would Jesus die for His enemies on the cross, but God drowns the enemies of Israel in the Red Sea?” Doesn’t something seem “wrong” in that picture? It does to me… This is my attempt to provide a solution…

Please provide your input in the comment section below…. 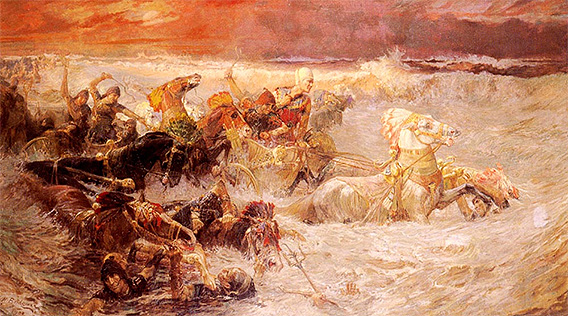 One almost feels bad for Pharaoh.

After experiencing the crushing humiliation of the ten plagues which culminated in the anguishing loss of his firstborn son, Pharaoh damages the economy and productivity of Egypt by finally allowing the Israelites to leave Egypt, only to change his mind and chase after them in hot pursuit, which leads to the decimation of his army in the Red Sea.

If there is any lesson at all in the sad tale of Pharaoh in Exodus 1–14, it is that pride goes before destruction, and a haughty spirit before a fall (Proverbs 16:18).

Nevertheless, it seems from various clues in Exodus and other texts in Scripture dealing with the Israelite exodus from Egypt that it was never God’s intention to break Pharaoh or destroy Egypt. Instead, God wanted Pharaoh to recognize His sovereignty over all things.

If at any time during the ten plagues, Pharaoh had submitted to the will of God and let the Israelites go, the nation of Egypt would not have suffered the way it did. Although it is a popular Christian teaching to say that God sent the plagues with the express purpose of hardening Pharaoh’s heart so that God could destroy Pharaoh and the Egyptian army, this way of reading the exodus event is probably not the best and does not reflect the heart and love of Jesus (See Forster and Marston, God’s Strategy in Human History, 63-69).

Despite God’s warnings to Pharaoh and repeated signs that God wanted Pharaoh to let the Israelites go, Pharaoh continued to disregard God’s warnings and rush headlong toward his own destruction.

This is not only seen in the events of the ten plagues, but also when Pharaoh’s army drowned in the Red Sea.

The Drowning of Pharaoh’s Army in the Red Sea

There is something quite strange about the drowning of Pharaoh’s army which needs to be pointed out as we seek to understand the violent descriptions of God in the Old Testament in light of Jesus Christ.

While few would consider the drowning of Pharaoh’s army one of the more violent actions of God in the Bible—for didn’t Pharaoh bring this destruction upon himself?—there are a couple things in the text which helps us understand God’s involvement in human violence.

First, it is important to remember that from an Old Testament Hebrew perspective, the forces of rebellion and chaos arrayed against God were often identified with the sea, and especially with the storms and waves that often rage across the sea. This concept was considered in previous posts as part of the discussion of the flood.

So once again, just as the ten plagues put on display the power by God over the impotence of the various Egyptian deities, so also, the crossing of the Israelites through the waters of the Red Sea showed that God even had dominion and power over the threats of chaos, storms, and destruction that were identified with the sea.

However, this does not mean that God’s hand of protection is without limits.

The Limits to God’s Control

The entrance of the Egyptian army into the path through the Red Sea demonstrates that if a group of people persists in rebelling against God, there comes a time when not even God can hold back the consequences of such rebellion.

Destructive decisions must eventually lead to destruction, even though God has pled with people to turn back and warned them about where their decisions will lead.

Pharaoh had been warned ten times already to let God’s people go, yet by sending his army after Israel, Pharaoh revealed that he still had not learned. He still could not let go. He still persisted in rebellion against God. The Red Sea crossing was not a trap set by God for Pharaoh, but was a form of deliverance for God’s people Israel, and Egypt, in their rebellion, tried to use God’s protection as a method by which to destroy.

As a result, destruction came upon Egypt instead.

But it is critical to note that even prior to destruction falling upon the Egyptian army, God attempted to deliver and turn the army back so as to avoid the devastating consequences of their sin. 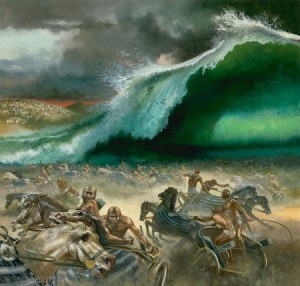 In Exodus 14:24-25, after the Egyptian army had followed the Israelites into the Red Sea, the text says that God sought to turn the Egyptian army back by bringing trouble upon them. He caused the chariot wheels to fall off, and brought confusion among the ranks.

It appears that through such actions, God was trying to non-violently warn the Egyptian army that destruction was about to fall upon their heads, and they should turn back while they still had time. The Egyptian army received the message loud and clear, and in fact, did attempt to turn back. Exodus 14:25 says that they sought to flee from the face of Israel. They stopped pursuing Israel through the Red Sea and turned back toward the shore from which they had come.

Yet the text takes a troubling turn at this point. One would think that if God was bringing troubles upon the Egyptian army so that they would turn back, that once they did turn back He would let them escape the Red Sea and live. The point was to deliver Israel; not destroy Egypt. And once the Egyptian army turned back, as the text says they did, what reason could God have for drowning the Egyptian army?

And yet that seems to be what occurs in Exodus 14:26. Just as the Egyptians were seeking to flee from the sea (cf. Exodus 14:27), the text says that God instructed Moses to stretch out his hand over the waters so that they might collapse back down upon the army. And so all the horses and men of Pharaoh’s army drowned beneath the waves (Exodus 14:30).

This confusing and somewhat contradictory series of events seems to indicate something going on behind the scenes, which is not fully evident in the text itself.

Behind the Scenes of the Drowning of the Egyptian Army

It seems that while God’s protection was upon Israel, this protection did not extend to the Egyptian army because of their continued refusal to heed God’s warnings and submit to God’s sovereignty.

As such, the Egyptians were in rebellion against God and had departed from God’s hand of protection. Through the use of the pillar of cloud and fire and by causing confusion among the army ranks when the chariot wheels fell off, God continued to try to keep the army out of the danger of drowning in the Red Sea.

But once Israel had passed fully through the Red Sea, the forces of chaos and destruction could no longer be held back, and they swept away the Egyptian army into death.

But What About God’s Command to Moses in Exodus 14:26?

The command of God to Moses in Exodus 14:26 to allow the waters to fall back upon the heads of the Egyptians can be understood as God taking the blame for that which He did not prevent.

Though God repeatedly warned the Egyptians about their rebellion and tried to get the Egyptians to turn back from the Red Sea crossing, they responded too late and destruction fell upon them, just as it had in the tenth plague.

In Exodus 14:26-31, God takes the blame for this event and bears responsibility for it because it is something that happened on His watch and seemingly by the hand of His prophet, Moses. But really, the fault lies with the Egyptians, and specifically with Pharaoh, who consistently and rebelliously walked in the way of destruction.

“Having cast off every God-given opportunity to repent, Egypt under Pharaoh succumbed fully to the destroyer’s jurisdiction” (Campbell, Light through the Darkness, 72).

God’s action in the miraculous Red Sea crossing was not in drowning the Egyptian army, but in holding back the waters for Israel as they passed through on dry land.

God’s actions were for deliverance and protection first from the invading army and second from the drowning waters. Though God did not desire that the Egyptian army be killed, their refusal to repent and refusal to abide by their promise to let Israel go meant that they had departed from God’s hand of protection.

So once the Egyptian army stepped foot into the Red Sea, God was not able to hold back the waters any longer. Due to their sin and rebellion, the Egyptian army was no longer under God’s jurisdiction, but was under that of the destroyer.

What are your thoughts on the drowning of the Egyptian army in Exodus 14? Did God really do it? If so, how do you reconcile the enemy-loving, self-sacrificing Jesus with the enemy-drowning, vengeful God of Exodus 14?