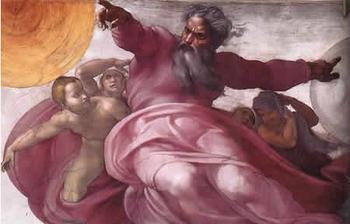 In Christian circles, we often hear a lot about three topics: Sin, death, and resurrection.

The basic message often preached goes something like this:

I suppose in general I don’t really have much of a problem with this list.

I would prefer #6 to more closely follow the way Jesus Himself offered eternal life to people in the Gospel of John (“Believe in Me for eternal life”).

#4 is true … kind of. It is not as if we would have had to die on a cross if Jesus had not done so. Nor is it true that because Jesus died, we don’t die. We all still die. But whatever.

#1 is true, of course. Although I am not a big fan of starting a Gospel presentation with this truth.

And #2 and #3, well, depending on what is meant by the word “punish,” I may or may not object to these points.

So I guess in general, I do have some problems with this list … Ha!

But let me focus on this concept of punishment, because it is here where the sort of “gospel” presentation as summarized above can get pretty far off base.

When most people think of “punishment” they think of an angry God dealing out fiery wrath on everybody who crosses Him. They feel that sin must be punished, that pain and suffering must be meted about by God on all who disobey His will.

As a result, many Christians feel that since God “punishes” sin, we too must punish people. The logic here breaks down pretty quickly, just as it does with us “judging” people.

But what if God doesn’t punish people? ⇦ Click here to ask that question on Twitter and see what people say.

In this post and the next post we will look at four reasons why I think God does NOT punish. Does he discipline? Yes. Does He judge? Of course. But punish? No.

Yes, yes, you may be able to find verses in your preferred English translation which says that God “punishes” sin. 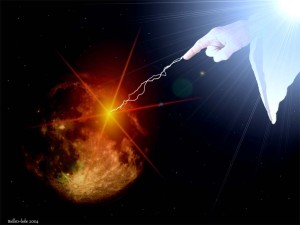 For example, in some translations of Exodus 20:5, it says that God punishes children for the iniquity of their parents. This sounds terribly unjust. Why should children get punished for something their parents did? But if we understand the Hebrew terms used here and in other similar references as “discipline” or “judgment” we can begin to make a little more sense of these passages. My preference is “judgment.”

So Exodus 20:5 says that God judges children for the iniquity of their parents. This doesn’t sound much better than “punish” until we realize that judgment is not always negative.

Though judgment carries negative connotations in our minds, the biblical concept of judgment is not always negative. Judgment is little more than “deciding” or “announcing a verdict.” In a trial, a judge makes a judgment. Sometimes his judgment is in favor of the plaintiff, and sometimes not. But whether “punishment” is meted out or not, when a judge makes a judgment, he or she is simply making a decision about a case. So it might be best to think of “judgment” as “making a decision.”

God “judges” the righteous and the wicked, meaning He hears their cases and decides what do in each case. In this way, a “judgment” can be a good judgment, a granting of relief to one who has been treated unfairly. In judging children for the sins of their parents, God is making wise and loving decisions about how to treat children based on the poor decisions of their parents.

So, for example, in the Mosaic law, a parent might get their family into debt or slavery. But God set up the Israelite economy in such a way so that every so often, all debts were cancelled and all land reverted to the original landowners. In this way, God is making sure that children do not suffer for the poor decisions of their parents. In these cases God is making a judgment in favor of the children. That is a better way of understanding Exodus 20:5 (for a little more on this topic, see Creation Untamed, 51).

C. S. Lewis wrote masterfully (does he write any other way?) on this subject in his book Reflections on the Psalms. In the chapter on “Judgment in the Psalms” he wrote the following. It is a long quote, but worth reading:

The ancient Jews, like ourselves, think of God’s judgment in terms of an earthly court of justice. The difference is that the Christian pictures the case to be tried as a criminal case with himself in the .dock; the Jew pictures it as a civil case with himself as the plaintiff. The one hopes for acquittal, or rather for pardon; the other hopes for a resounding triumph with heavy damages. Hence he prays ‘judge my quarrel’, or ‘avenge my cause’ (35:23).

And though, as I said a minute ago, Our Lord in the parable of the Sheep and the Goats painted the characteristically Christian picture, in another place He is very characteristically Jewish. Notice what He means by ‘an unjust judge’. By those words most of us would mean someone like Judge Jeffreys or the creatures who sat on the benches of German tribunals during the Nazi régime: someone who bullies witnesses and jurymen in order to convict, and then savagely to punish, innocent men.

Once again, we are thinking of a criminal trial. We hope we shall never appear in the dock before such a judge. But the Unjust Judge in the parable is quite a different character. There is no danger of appearing in his court against your will: the difficulty is the opposite — to get into it. It is clearly a civil action.

The poor woman (Luke 18:1—5) has had her little strip of land — room for a pigsty or a hen-run — taken away from her by a richer and more powerful neighbor (nowadays it would be Town-Planners or some other ‘Body’). And she knows she has a perfectly watertight case. If once she could get it into court and have it tried by the laws of the land, she would be bound to get that strip back. But no one will listen to her, she can’t get it tried. No wonder she is anxious for ‘judgment’.

Behind this lies an age-old and almost world-wide experience which we have been spared. In most places and times it has been very difficult for the ‘small man’ to get his case heard. The judge (and, doubtless, one or two of his underlings) has to be bribed. If you can’t afford to ‘oil his palm’ your case will never reach court. Our judges do not receive bribes. (We probably take this blessing too much for granted; it will not remain with us automatically.)

We need not therefore be surprised if the Psalms, and the Prophets, are full of the longing for judgment, and regard the announcement that ‘judgment’ is coming as good news. Hundreds and thousands of people who have been stripped of all they possess and who have the right entirely on their side will at last be heard. Of course they are not afraid of judgment. They know their case is unanswerable — if only it could be heard. When God comes to judge, at last it will.

Dozens of passages make the point clear. In Psalm 9 we are told that God will ‘minister true judgment’ (v. 8), and that is because He ‘forgetteth not the complaint of the poor’ (v. 12). He ‘defendeth the cause’ (that is, the ‘case’) ‘of the widows’ (68:). The good king in Psalm 72:2 will ‘judge’ the people rightly; that is, he will ‘defend the poor’. When God ‘arises to judgment’ he will ‘help all the meek upon earth’ (76:9), all the timid, helpless people whose wrongs have never been righted yet. When God accuses earthly judges of ‘wrong judgment’, He follows it up by telling them to see that the poor ‘have right’ (82:2, 3).

The ‘just’ judge, then, is primarily he who rights a wrong in a civil case.

So “punish” is not the right word, and “judgment” does not necessarily mean something bad. It simply means “deciding.”

The judgment of God is simply to make a decision in a civil case, often in the favor of the one who was wronged.

So judgment is not punishment, and all places in the Bible which speak of “punishment” should probably be understood as discipline or judgment. There are three other reasons as well that God does not punish sin, which we will look at the other three in the next post.

Until then, what do you think this view of divine punishment does for how you think about God, and how you interact with other people?