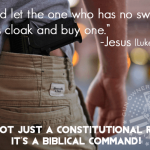 I was recently listening to a radio talk show host talk about the right of American’s to own guns and he made the statement that even Jesus wants people to own guns.

He said that true Christianity is a Christianity that bears arms. He then went on to quote Jesus’ statement in Luke 22:36 where He instructs His disciples to sell their cloak so that they can go buy a sword. “See?” the talk show host said, “Any Christian who says we should not buy and own weapons is not a true Christian because they are contradicting Jesus Himself!”

I laughed at this sort of argument, but sadly, the radio host was deadly serious, and far too many Christians agree with him. 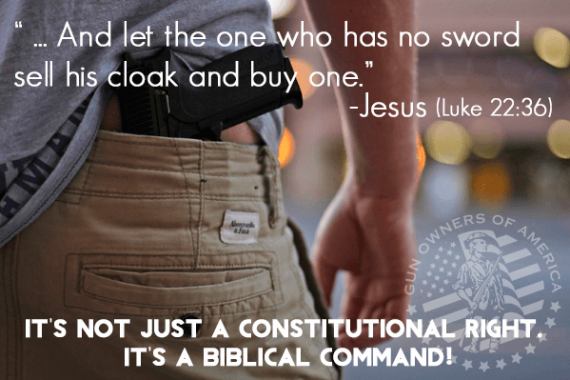 Far too many Christian see Jesus’ instructions to His disciples to go buy a sword as an endorsement by Jesus of gun ownership, and in some cases, an endorsement of violence. I am not of this persuasion.

For the record, I support the constitutional right of United States citizens to buy and own guns. But I don’t do so on the basis of Scripture. I support gun ownership for political, historical, and rational reasons. But none of that matters for this post.

1. These Swords Were Not For Violence

First of all, we must recognize that whatever reasons Jesus had for telling His disciples to buy swords, the swords were not to be used for violence. 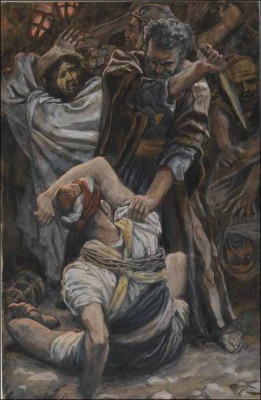 After all, when Peter actually used the sword that he was carrying, Jesus not only rebuked him and told him to put the sword away, but He also healed the damage that had been done by Peter’s sword (Luke 22:47-51).

Furthermore, when Jesus was put on trial, Jesus told Pilate that since His kingdom was not of this world, His followers would not fight (John 18:36). Obviously, if Jesus had wanted His disciples to use the swords they had purchased, Jesus could not have said this.

Jesus clearly knew, and His disciples seemed to understand (especially after learning from the rebuke of Peter), that Jesus did not want them to use their swords for violence.

So why then did Jesus have His disciples buy swords?

2. The Swords Were For the Fulfillment of Prophecy

Immediately after telling His disciples to buy a sword, Jesus gave them the reason why: “For I say to you that this which is written must still be accomplished in me: ‘And He was numbered with the transgressors’” (Luke 22:37).

That this is what Jesus meant is confirmed by the statement of Jesus in Luke 22:38 when the disciples show Jesus the two swords they had obtained. Jesus said, “It is enough.” In other words, “That will do.”

If Jesus was seriously condoning violence, two swords were not “enough” to accomplish anything, especially in the hands of a ragtag bunch of fishermen and tax-collectors who had no military training. 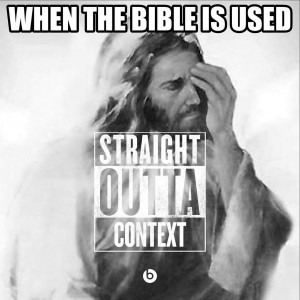 To fulfill prophecy, Jesus had to be viewed as a transgressor. He had to at least appear to be a political revolutionary to the Jewish authorities for them to feel justified in arresting him. His cleansing of the temple a few days earlier was probably calculated for the same effect. So, to fulfill the prophecy and to provoke the Jewish authorities, he had to have enough weaponry to justify being viewed as a law breaking revolutionary (Greg Boyd, Go Buy a Sword )

So Go Buy a Gun if You Want To…

So if you live in a country that allows gun ownership, and if you are a law-abiding citizen, go buy a gun if you want to.

But don’t ever suppose that Jesus endorses gun ownership because He told His disciples to “go buy a sword.” That is a terrible misreading of Luke 22:36.