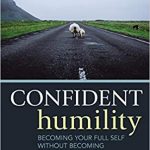 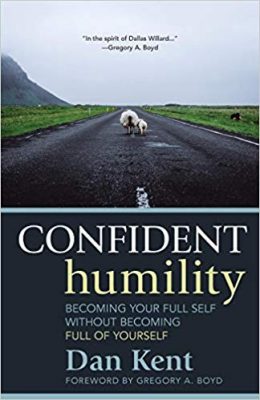 I had the privilege of interviewing Dan Kent this week about his book, Confident Humility.

I’ll be honest. When I first heard that he had written a book about humility, I thought “Booooring … we all know everything there is to know about humility.”

But then I read the book.

It turns out I have been thinking and teaching about humility entirely wrong. Dan Kent’s book opened my eyes to what truly humility is, how humility works, and how to attain humility in my life.

If you want to understand what the Bible teaches about humility and how to become humble and live humbly in your life, listen to my interview with Dan Kent, and then go buy a copy of his book on Amazon.

Let your view of humility get turned upside down! 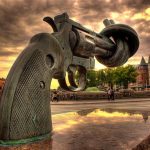 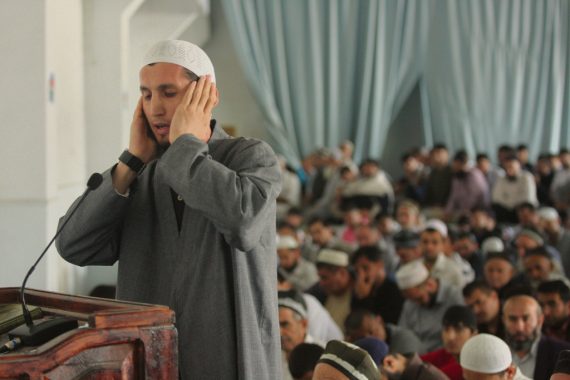 It was Friday afternoon, around 12:30. The Muslim Friday Jumah prayer was supposed to begin, and 107 Muslims had gathered. But as they were washing their feet and faces, and laying out their prayer rugs, the authorities called me on the phone and told me to cancel the Jumah prayer.

I am a white Christian pastor. I work in a prison as a chaplain.

But due to a looming security concern, I had no other choice, and went and informed the gathering Muslims that Jumah had been canceled for that day.

The seething anger directed my way was palpable. All 107 Muslims stood up, glared at me, and started to gather around. I sensed that how I responded in the next few seconds would determine whether I lived or died that day.

“You can’t cancel the Jumah prayer,” said the Imam of the group. “It’s mandatory. It’s required.”

“Yes, I know,” I calmly responded. “But there is a security concern, and until it’s resolved, everybody is required to return to their housing units.” In a prison, security takes precedence even over religion, but even still, nobody likes to have their religious service cancelled.

“So what are we supposed to do, Chaplain?” asked the Imam. “Allah demands that we pray, but you are demanding we not pray. Who do you think we should obey?”

The crowd of Muslims pressed in closer to hear how I would respond. My mind raced, and I knew that the security concern could quickly escalate into a security crisis (and possibly a riot) depending on the next words out of my mouth.

It is very difficult to practice nonviolence in a system that is inherently and purposefully built upon the principles of violence. The central principal of violence is that you get what you want by having a bigger stick. You may not always use the stick; sometimes having it is enough. This idea was immortalized in Teddy Roosevelt’s famous explanation of his foreign policy: “Speak softly, and carry a big stick.” As long as your stick is bigger than your enemy’s, this should be enough to deter him from war.

The prison system, in which I work, is founded on this principal. By their very nature, prisons take people who have engaged in various forms of violence and put them in a situation where they have very few sticks at their disposal, while all the guards and prison staff have much larger sticks. The big stick principal is what keeps the prison relatively safe and secure.

But the big sticks are not what you think. Despite the common perception, most prison staff in the west no longer carry weapons of any kind. Guards do not have guns or even billy clubs. They typically are “armed” only with a radio. Outmanned and overpowered, the modern prison guard is trained to use their minds and their mouths to maintain peace inside a prison.

But it doesn’t always work. And when it doesn’t, riots break out, people are killed, and yes, this is when the guns are brought in. Though even then, only non-lethal munitions are used.

Working in the prison system as I do, I have found a “weapon” that is even more powerful than the radio. And it is the constant “radio connection” I have with God.

So in that moment, as the Muslims angrily waited for my answer, I quickly asked God for wisdom on what to say. And He showed me.

There was a collective gasp by the Muslims.

I could sense their thoughts. Was the chaplain mocking them? Or was he actually telling prison inmates to disobey an order?

But I continued. “Nobody is demanding that you not pray. I invite you to pray. I want you to pray. I ask you to pray. I hope that you will pray. But today, because of the security concern, you are going to have to pray down in your housing units. Allah is powerful, is he not? He will hear your prayers there just as well as he will hear them in this place. So pray to Allah that this situation would be resolved quickly and peacefully. Then maybe we can get you back up here to the chapel a little later this afternoon for your communal Jumah prayer.”

They started at me, still trying to decide how to respond.

Finally, the Imam turned to the gathered Muslims and said, “The Chaplain is right. Allah can hear our prayers and work to resolve this situation quickly. We will return to our housing units.”

Later that afternoon, I was indeed able to make arrangements for the Muslims to return to the Chapel for their afternoon Jumah prayer. It was late, but at least it was done. The Muslims praised Allah for hearing and answering their prayers, and I praised Jesus for answering mine. 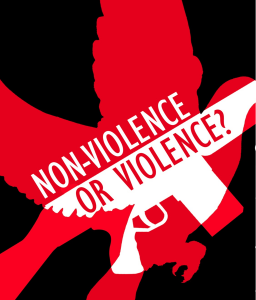 During my years of working as a prison chaplain, I have found six principles that help me navigate the tricky and treacherous waters of practicing nonviolence in a system built on violence. The six principles form an acrostic for “CHRIST” because they are founded upon the teachings and example of Jesus Christ.

Here are the six principles, with a brief explanation of each.

Our world trains us that when we are faced with violence, the best response is greater violence. We use violence to fight violence. But violence always and only leads to more violence, so those who would practice non-violence must start to find alternative, creative solutions out of violent situations.

This is easier said than done, however, and so our attempts at creative responses must be bathed in prayer for God, the Creator, to guide us into creative non-violent responses as well. There is no “one size fits all” response to violence, for each situation is different and requires a different response. So creativity is required. 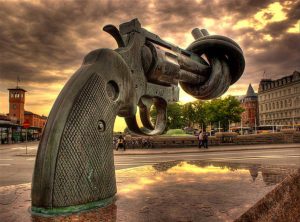 It takes two to tango. It also takes two to fight. And have you ever noticed that in nearly every violent engagement, both sides think the other one “started it”? Even in the case of terrorists flying planes into skyscrapers, they thought that they were righteously responding to the unjust treatment of their people by the United States. Even Hitler believed he was responding to the unjust treatment of Germany after their losses in World War I.

So in any sort of violent engagement, we must be brutally honest with how we ourselves contributed to the problem. We must not and cannot place all the blame on the other person, for this will only cause greater problems.

Let’s be realistic: non-violence doesn’t always end violence. We live in an evil world, and sometimes, evil wins. So we must not think that non-violence always “works” and is the magic cure-all for everything that ails the world. It isn’t. It doesn’t always work. In fact, maybe we could say that it rarely works.

So why practice non-violence? Because even if non-violence rarely works, this is still better than violence, which never works. Violence always and only creates more violence. But sometimes, non-violence creates peace, and therefore, it has a better success rate. But we must be realistic and recognize that a non-violent response will not always bring an end to violence. It often won’t. 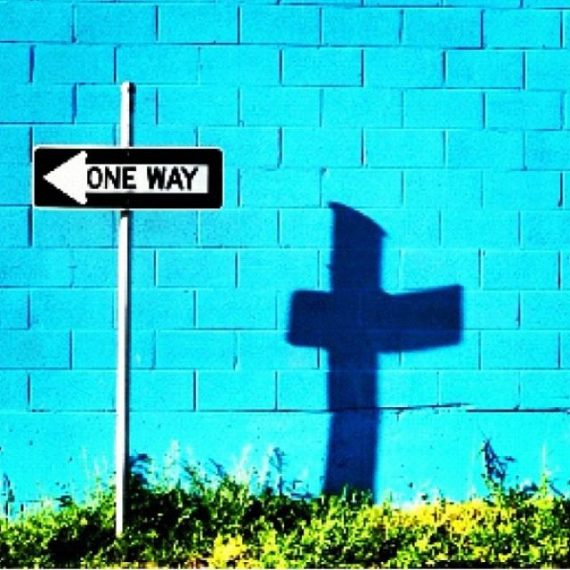 If we want to practice non-violence, we must understand that we are incarnating Jesus to the world, just as He incarnated God to us. It is not we who are out there all on our own standing up for love, patience, forgiveness, and peace, but it is Jesus in us who is standing up for these things. Furthermore, a recognition that we are the incarnation of Jesus on earth encourages us to live as He lived and love as He loved.

It is very easy to respond to violence with violence. People often talk about the courage and bravery of war, and indeed, it does take courage to charge onto the field of battle, not knowing if you will make it back off.

Similarly, it does indeed take courage and bravery to pull a knife or a gun on an assailant. However, it takes greater strength and courage to stand up against violence without violence. We must not think that non-violence is the weak way out. It is the bravest and strongest way out.

It is much harder to take the blows that fall on your back without retaliating than to lash out and trade blow for blow. Non-violence is not weakness or cowardice, but takes the greatest strength and courage.

If God is non-violent, and calls us to practice non-violence as well, then we must trust God to work in us and through us, even though our minds, wills, and bodies scream out in protest at the ways of non-violence.

It is only when we trust in God to bring a solution to a bad situation that God will step in to do exactly that. And related to this, in light of the previous five principles, it important to know that even if we die while practicing non-violence, we can still trust God to use our death to create peace, just as He did in Jesus. A resolute trust in God reminds us that sometimes it is better to die than to kill. 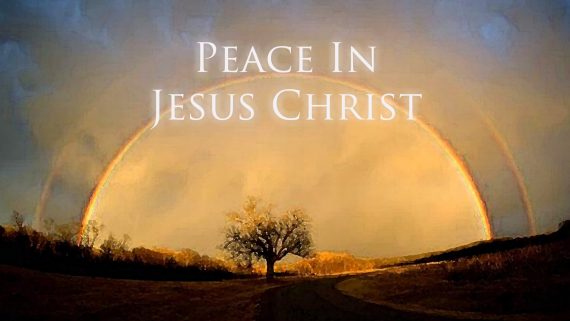 Jesus modeled the way for us to live with non-violence toward others. Yes, we must resist evil wherever it is found, and we must stand up for righteousness and justice, but we must do so in the ways of Jesus, through non-violent resistance.

What methods and practices have you found which help you resist non-violently? Do you think that such forms of resistance can help solve the problems of violence that the world faces today? Why or why not? Which of the six CHRIST principles outlined above will be most challenging for you to practice? Let us know in the comment section below!

[Note: This blog post is part of the 2018 Blogging Carnival for Nonviolence. Go here to see the other posts.]