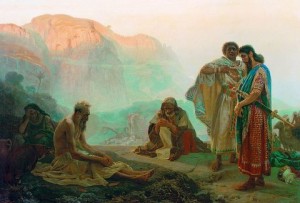 There are biblical passages outside of Genesis 6–8 that refer to the flood. One of the earliest of these is Job 22:15-18. In fact, since many scholars believe that the events described in the book of Job occurred long before the author of Genesis was alive [1], what the book of Job records about the flood may well be the earliest description of what happened in that cataclysmic event. [2]

Nevertheless, some may take exception with Job 22:15-18 as saying much of anything reliable about the flood. Why? Because Job is not the speaker in Job 22:15-18. Instead, Eliphaz, one of Job’s friends, is speaking.

However, even though Eliphaz is the one speaking, this does not mean we should automatically discredit everything he says. We will consider the book of Job in more detail later in posts and see that Job is in basic agreement with most of what his friend Eliphaz says. So although Eliphaz was wrong about the reasons for Job’s suffering, this does not mean he was wrong about everything he said. Most of what Eliphaz and Job’s other friends said is true in other circumstances; their fault was that what they were saying was not true in Job’s situation.

Will you keep to the old path that the wicked have trod?
They were carried off before their time, their foundations washed away by a flood.
They said to God, “Leave us alone! What can the Almighty do to us?”
Yet it was he who filled their houses with good things…  (Job 22:15-18a, NIV) [3]

According to Eliphaz, God’s role in the flood was to give good things to the people who lived prior to the flood (Job 22:18a), but in response, all they wanted was for God to leave them alone. They told God to depart from them!

How they told God to leave them alone is not made clear in Job 22. Maybe it was simply through their persistence in committing great evil. Maybe they said this in response to the preaching of Noah (2 Pet 2:5). Regardless of how it happened, the explanation of Eliphaz for why the flood came upon the earth is that sinful humanity pushed God away.

Eliphaz is stating the sixth principle of the Chaos Theory: that God departs from us when we depart from His protective hand. God never actually departs from us, but He has given to mankind such a high degree of autonomy and freedom, that if we choose to continue down a path of death and destruction, He will let us go, even though it pains Him greatly, and even though He does everything possible to warn us about where such paths lead.

What we see in this earliest explanation of the flood account, is that God did nothing but woo people to Himself by filling their houses with good things (Job 22:18a).

But the people thought they knew better than God, and wanted to live their own way, despite the fact that He poured out His love and care upon them, and even sent righteous Noah to warn them about the flood that was coming. Yet they did not listen, and told God to just leave them alone.

So when the destruction of the flood waters came upon the earth, God had no choice but to do what they had requested, and leave the people alone. When “alienation becomes incurable, God does, in fact, depart.” [4]

[1] Evidence for an early date of the events of Job is seen in several ways. First, Job raised two complete families and died 140 years after his testing (Job 42:16). The LXX says that he died at age 248. This puts him in the age range of Peleg (Gen 10:25), who some think might have been Job’s uncle (if Job is the Jobab of Gen 10:29). Second, Job’s wealth is listed as measured in livestock and possessions, not money, which is further evidence for an extremely early date of the events in Job. Finally, the events recorded in Job were probably events he was familiar with. This includes the post-Flood ice age (38:29-30), cave men (24:4-10; 30:1-8), and the violent aftermath of the Flood which includes earthquakes, volcanoes, windstorms, and the raiding parties which decimated his first family.

[2] Though the events of the book of Job may have occurred before Moses lived, they were probably not written down in their present form until after Moses lived, and obviously, some of the events described in Genesis occurred long before Job lived. Confused yet? The order of events is something along these lines: (1) Creation. (2) The Flood. (3) Job Lived. (4) The story of Job was passed down orally. (5) Moses lived. (6) Moses composed the Pentateuch (No, I do not hold to the JEDP documentary hypothesis), which includes Genesis 6–8. (7) The story of Job was recorded in written form, probably during the reign of King Solomon.