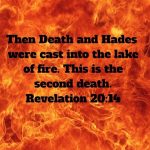 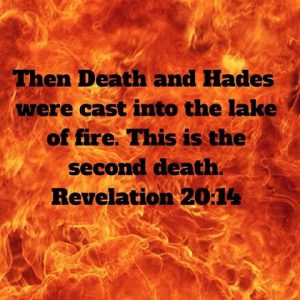 So what is this second death?

To put the question another way, if Hebrews 9:27 says that it is destined for humans to die once, then how can John write in Revelation 20:6, 14 and Revelation 21:8 that there is a second death?

The “Second Death” is not Annihilation

Instead, “death” means to be separated from the plan and purposes of God.

When something dies, it no longer functions the way God intended. This is true of physical bodies, sexual reproductive organs, interpersonal relationships, and faith.

So here in Revelation 20:6, 14 and Revelation 21:8, the person who experiences the second death will not be living out God’s plan and purposes for them in eternity.

The second death is simply being separated in eternity from what God originally wanted and planned for humanity.

Then how is the Second Death related to the Lake of Fire? 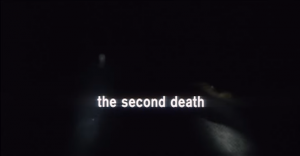 The “Fiery Lake” might be the place that unregenerate people live for eternity, but this does not necessarily mean that they are suffering and burning for eternity within the lake. Furthermore, as I point out in my forthcoming book on hell, the term “Lake of Fire” referred to the body of water we now call the Dead Sea.

So to say that someone was going to be case into the Lake of Fire, or the Dead Sea, is a symbolic or metaphorical way of saying that such people will end up in a place devoid of life.

This is what John goes on to describe. In the afterlife, as part of the second death, people will be subject to the same “lusts of the flesh” that humans are subject to right now here on earth. Just like in this life, people who live in the second death will be cowardly, unbelieving, abominable, murderers, sexually immoral, sorcerers, idolaters and liars.

So what is the Second Death?

The second death is not annihilation or eternal torment in flames of fire.

Instead, it is the continuation for eternity of what we experience in this life, but in an amplified way.

It consists of God allowing human beings to live life completely separated from Him. It is allowing them to live as slaves to hatred, violence, envy, immorality, deception, greed, lust and every evil thing. 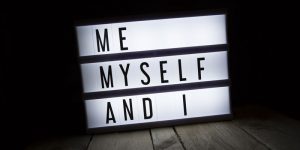 Just as being “born again” does not mean to “start your life all over again,” but instead refers to the transformation of a person’s life so that they head in the direction God wanted, so also, to “die again” does not mean that a person dies a second time, but that a person’s life goes in a direction that is even further away from God wanted and desired.

The “second death” therefore, is not annihilation, or the death of the eternal soul. Instead, it is the act of being entrenched or solidified in the way of rebellion against God.

The second death is an irreversible step on a path that leads away from what God wanted and desired.

C. S. Lewis’ theological fantasy book, The Great Divorce, depicts what this sort of everlasting death might look like. (He claims he was writing fiction … but was this really his view of hell and he was afraid of being called a heretic?)

The Great Divorce is a fascinating story of a man who gets on a bus in hell to take a trip to heaven. In the second chapter, Lewis describes what life is like for those who live in hell.

When people first arrive, Lewis writes that people find themselves in the center of a vast, sprawling town, which is very much like any town you mind find on earth, except that everything is free and nobody has any needs. So people move into any house they want, and start living in their new existence. But within a few days or weeks, they have a quarrel with one of their neighbors, and decide to move to a different street.

Lewis writes that this process continues forever, until some people get to the point where they live millions of miles away from anybody else.

In the everlasting second death, each person is allowed to be as selfish and mean as they want, and this causes them to eventually separate themselves from everyone else so that they finally live in complete isolation for all eternity, wrapped up in their own thoughts of everybody else’s faults and failures.

The Second Death is Everlasting Existence without God

In this life, there is an end to the choices we make. As we destroy our families, friendships, and health, we draw into ourselves and become more and more separated from others over time. Death stops this process of separation so that we can finally see ourselves and others as we really are, offer forgiveness and be forgiven, and begin to live in love and grace as God desires.

But in an eternal existence without God, where physical death is not an option, people will continue to separate themselves until eventually, they cut off all contact from everyone, and live solitary lives of self-centeredness and complete separation. For people who were created for community and relationships, this truly is a living hell. But it is a hell constructed by their own choices.

Those who experience the eternal second death (living in the realm of death, but never dying) are living in a hell of their own making. Their eternal existence will be a life dominated by the sins mentioned in Revelation 21:8.

In eternity, where there is no death to deliver a person from the devastation they have brought into their lives, this ongoing death will simply continue forever and ever.

What are your thoughts about this concept? Do you agree? Disagree? Does it still sound like “hell” to you? Is it just and fair for God to let people live in eternity in such a way? Would annihilation be more loving?