Last week I announced that I needed to take a break from my series on the violence of God, and that I was considering doing a series on Calvinism instead. I ran a survey to see if people were interested in this, and 98% of you said “Yes!” So here is the first post… (Some of these posts on Calvinism ended up in my book, The Re-Justification of God which can be found on Amazon.

I believe in the Five Solas 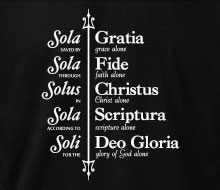 In English we might say that what we have from God is “by grace alone, through faith alone, in Christ alone, according to the authority of Scripture alone, for the glory of God alone.”

I affirm all five statements. I consider myself to be a child of the Reformation.

I am Neither Calvinist nor Arminian

Yet I do not identify with either of the two main groups that came out of the Reformation; I am neither a Calvinist nor an Arminian. (I am not Lutheran either, for those Lutherans who see themselves as a group apart.)

Certainly, there are many things I appreciate about John Calvin, Jacobus Arminius, Martin Luther, and the other Reformers, but I have too many differences with the main theological arguments of each man to be comfortable identifying myself with the theological systems that bear their names.

Ironically, my main area of disagreement with Calvinism and Arminianism is that they do not take the five solas far enough.

That is, the Reformers and their followers stopped short of fully reforming their theology around the five solas. Having begun with the revolutionary truths of the five solas, they failed to follow through on the full theological ramifications of these five statements. As a result, the Reformation sputtered to a halt and—in my opinion—ultimately failed.

The Failure of the Reformation

If you were to compare the typical writings of the average Calvinist, Arminian, Lutheran, and Catholic theologians, you would discover that when it comes to the issues of faith, grace, the accomplished work of Jesus Christ, the authority of tradition over Scripture, and the goal of glorifying God in all of life, there is very little distinguishable difference (See the journal article I wrote on this several years ago).

It is not just me saying this. There have been talks in recent decades between prominent leaders of these various groups to all reunite into one group. The primary sticking points, it seems, have nothing to do with the five solas, but center instead on issues like Mariology, the veneration of the Saints, and papal authority.

I believe that if the Reformers and their followers had resolutely held to the five solas, the spiritual landscape of the world today would be much different. The Reformation would have continued to do its work, so that grace, faith, love, and freedom would flow out of the church today in ways that have not been seen since the church began nearly 2000 years ago.

Of course, one cannot blame Luther, Calvin, Arminius, or any of the other Reformers for not fully following through on the ramifications of their own theological insights. Theological development is a multi-generational endeavor.

We can, however, challenge both the contemporary and historical followers of the Reformers to advance upon the teachings of their forebears. No Reformer, I believe, ever thought that his beliefs were perfect and that nobody could ever improve upon his teachings or take his ideas further.

The Reformers would agree, I think, with what some people say about the Reformation: “Always reforming; never reformed.” The reformation of church and theology is never over.

Just as the Reformers sought to reform the church of their day, so also, they would want those who came after them to continue the reforms “till we all come to the unity of the faith” (Ephesians 4:13). 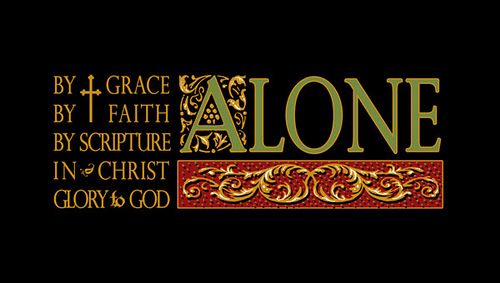 That is the purpose of this series on Calvinism. I hope that the information contained within these posts will build upon the reformations that began during the Reformation and will lead to further reformation in the future. Specifically, I want to provide Calvinists and non-Calvinists with a perspective on certain passages of Scripture which will hopefully allow people to see that there are viable alternatives to Calvinism and it’s theological opposite, Arminianism.

There is a balanced middle ground between Calvinism and Arminianism.

Though there are numerous avenues that one might take in seeking to provide a non-Calvinistic perspective on Scripture, the route I have chosen is to emphasize the biblical teaching on “faith alone” and contrast it with what is often taught in Calvinism. I want to show how Calvinism, though it claims to defend sola fide, actually undermines it with every point of its theological system.

Related to this, the book will also contain a heavy emphasis on radical, outrageous, shocking, scandalous grace. Of course, I cannot write about faith or grace without mentioning Jesus Christ. All of this discussion will revolve around what the Scripture says, rather than on human or religious tradition, and ultimately, the entire discussion is for the glory of God as I seek to help others see the radiating grace of God in the face of Jesus Christ as He died on the cross for the sins of the whole world.