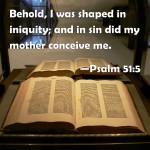 Psalm 51:5 is often used to defend the idea that humans are sinners before they are born.

Behold, I was brought forth in iniquity, And in sin my mother conceived me (Psalm 51:5)

In his commentary on this text, John Calvin wrote that this proves that David was a transgressor before he ever saw the light of the world (Calvin, Calvin’s Commentaries, Psalms v2: 290).

This sort of idea is then used to prove that people are totally depraved, even from conception, not because of what they do but because depravity is part of who we are.

There are, however, several other ways of understanding this statement of David in Psalm 51:5.

Born in Sin = Learn to Sin

First, David could be saying that since he was born as a human, he learned to sin, in the same way that infants and toddlers learn to talk. It is not uncommon for the Biblical authors to speak of being “born into” something in just this way.

Born in Sin = Born in a Sinful World

Second, it could be argued that what David meant was that he was born into a world of sin. The phrases “in iniquity” and “in sin” would thus be understood as metonymy for “a world full of sin.” Metonymy, where a word or phrase is used in place of a different word or phrase with which it is associated, is frequently used in Scripture, and even in modern everyday speech (e.g., “the White House” is often used to refer to the President of the United States, his staff, and the decisions and policy that come from them).

So in the case of Psalm 51:5, David could be referring to the world of sin in which he was conceived and subsequently born. 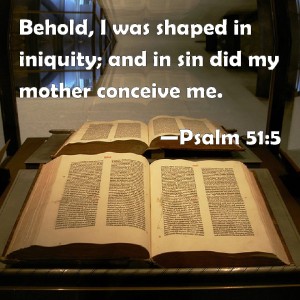 Third, we could simply say that Psalm 51:5 is poetic hyperbole. David is, after all, confessing his sin of committing adultery with Bathsheba, and so in the midst of this confession, he my seek to exaggerate his own sinfulness by saying that he has always been sinning, even from conception.

The Psalms are full of such exaggeration, as are the rest of Scriptures. In one place, the Psalmist writes that he drowns his bed with a single tear (Psalm 6:6; the Hebrew word for “tears” is singular), and even Paul writes that he is the chief of sinners (1 Timothy 1:15).

Born in Sin = David’s Mother Was Accused of Adultery

One final possibility is based on a traditional Jewish reading of Psalm 69.

According to various Jewish historical writings, David’s father and brothers thought that David’s mother, Nizbeth, had committed adultery and borne him out of wedlock (See my post yesterday on David’s Mother Nizbeth for more on this).

They thought David was a bastard (the word “stranger” in Psalm 69:8 has the same Hebrew root as muzar, meaning “bastard”). The truly guilty one was David’s father, Jesse, who, as a result of having Moabite blood (from Ruth) and due to some strange twists of Jewish law, believed that his marriage to Nizbeth was illegitimate and stopped having sexual relations with her to keep her from sinning. Yet he also feared that his seven sons were illegitimate, and so he had sought to gain a legitimate heir for himself by sleeping with his wife’s maidservant (Yes, it sounds strange, but you have to understand Jewish law for it to make sense).

Anyway, Nizbeth’s maidservant loved her mistress dearly, and so switched places with her before Jesse entered her bed, much like Leah and Rachel had switched places so many years before on Jacob’s wedding night. So Jesse ended up sleeping with his wife, even though he thought it was his wife’s servant. Nizbeth became pregnant, but never told her family how she had become pregnant, because she wanted to protect Jesse from public shame. The result, however, was that Jesse, their seven sons, and the entire community came to believe that Nizbeth was an adulterer. The town urged Jesse to stone his wife for adultery, but out of love for her, he refused, and several months later, David was born.

So David grew up in a family in which he was despised, rejected, shunned, and outcast. He was treated with scorn and derision (Psalm 69:7-8). The community followed the example of the family, and assumed that David was full of sin and guilt (Psalm 69:11-12). If something turned up missing, they believed he stole it, and forced him to replace it (Psalm 69:4). He was often the object of jokes and pranks, filling his plate with gall and his cup with vinegar (Psalm 69:20-21).

There are numerous other details to this story, but the point for our purposes here is that this may be what David is referring to in Psalm 51:5. If this Jewish history is true (and we have no good reason to believe otherwise), then almost everybody—including David’s own father and brothers—believed that David was born as a result of adultery, which is why David writes, “I was brought forth in iniquity; and in sin my mother conceived me.”

No matter which of the views above we adopt, the view that is most unlikely is the Calvinistic idea that David is making some sort of theological statement in Psalm 51:5 about the universal total depravity of all humans.

This sort of theologizing was not David’s intention and it does not fit the context of the chapter. There are numerous other explanations for this verse which make much better sense of the verse itself and the context as a whole.