You are here: Home / Client-Patron Churches and Clergy 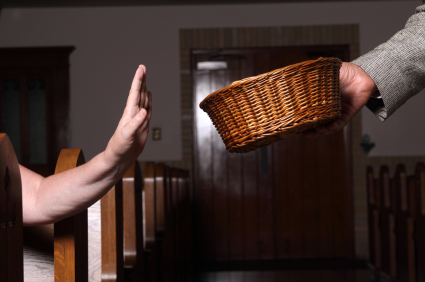 As we saw yesterday, in the era of the New Testament, there were two main ways of gaining financial support for the work of the ministry. You either worked a job to pay your own expenses, or you found a rich Patron who would you on as a client and pay for your expenses.

Outside of the New Testament, we see these two methods referenced over and over in the writings of the early church fathers. Some worked with their hands and supported themselves. Others sought out a Patron to provide for their needs and give them the food and clothes they needed so they could teach, travel, study, and write. Typically, the first few lines of a book indicate whether an early church father was a client or not, as those who have Patrons usually always dedicate their book or pamphlet to their Patron. For example, the patron of St. Jerome was Pope Damasus, and Jerome makes frequent references to works that had been commissioned to him by Damasus, and that once written, they would be dedicated to Damasus.

The fact that the Pope was a Patron raises an interesting point. At this point in church history, the spiritual leader in the church of Rome was also a Client. He was a Client of the Roman Empire. When Emperor Constantine converted to Christianity and made it the official religion of the Roman Empire, the church was unified with the Roman Empire, and was viewed as a Client to the Empire. The Empire turned over all the pagan temples and most of the pagan priests to the Church, and paid for them all out of the Empires vast tax and war revenue.

So all of the church buildings were owned and paid for by the Empire, and many of the clergy members also received their income from the government.

And for the most part, this is the way churches and clergy were supported for the next 1000 to 1500 years. Through a series of political maneuvers and power struggles, the Catholic Church and the Roman Empire melded together, but the Client-Patron system lived on in various ways and forms. This sort of system still lingers on in certain European countries that have state-funded churches.

Even here in the United States, we are Clients to the government in the sense that we are “tax exempt” and if we criticize or speak out against out Patron government, they threaten to remove our tax-exempt status. This might not be such a bad thing, but we’ll discuss that idea later in a later post.

Although remnants of the Client-Patron system still exist today, something happened about 1000 years ago which caused the church to look for new ways of revenue and income, and for the first time in nearly a thousand years they began to consistently preach and teach the necessity and importance of the “tithe.” We will look at what happened tomorrow.