You are here: Home / Do not Muzzle the Ox 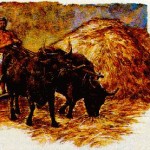 We are looking at several passages that are often used to defend the right of pastors to get paid. Frankly, I am not exactly against pastors getting paid. What I am against is the use of Scripture as a defense for the practice, especially when these passages are used to lay burdens of guilt on others if they don’t give more, tithe more, and “joyfully” sacrifice more. 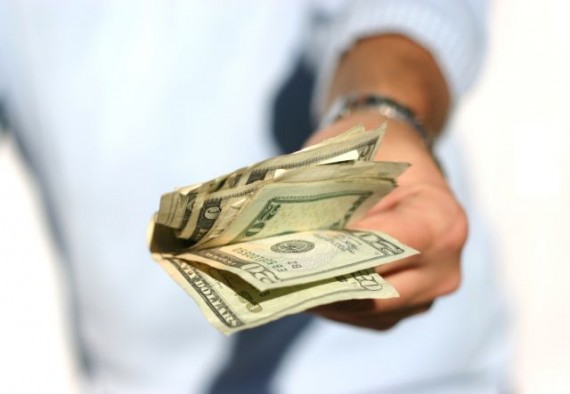 We have looked previously at the Levitical Priesthood and the statement in Acts 20:35 that it is more blessed to give than to receive. Today we are going to look at the statement in 1 Corinthians 9 where Paul quotes from Jewish law: “Do not muzzle an ox while it is treading out the grain.”

First Corinthians 9 is about Apostolic ministry

First Corinthians 9 contains Paul’s defense of his right as an apostle to receive money from the people he minister among, but his refusal to do so in spite of his rights. Paul compares that apostolic ministry to soldiers who go to war and workers who tend fields. They enjoy the fruits of their labors, argues Paul, and so also should an apostle.

Paul supports his case with a quotation from Deuteronomy 25:4 about not muzzling an ox while it treads out the grain (9:9-10), and also mentions the biblical precedent of the priests serving in the temple who get to partake of the offerings and sacrifices that are brought in (9:13-14). In such ways, Paul clearly defends his right to receive payment for his work as an apostle. He goes on, however, to explain why he has given up this right so as not to be a stumbling block to anyone (9:15-18).

Apostles are not the same as Pastors

So does this passage mean that pastors of a local church have the right to take a salary? Not quite.

Paul is only defending the right of apostles to receive income from the people among whom they labor. An apostle is someone who does not stay in one area, but travels from town to town, carrying the message of the Gospel with them to new and unreached areas. They plant the seeds of the Gospel, and encourage initial spiritual growth among those who believe, and then after a while—anywhere from a few days to a few years—move on to a new location to spread the Gospel elsewhere.

That Paul is clearly talking about traveling apostolic teachers is evidenced not only by his frequent references to “apostles” throughout the passage, but also the statements in verses 5 and 7 about taking a believing wife along with them, and going off to war. With such images, Paul shows he is talking about the teacher who travels away from his home and place of employment to go serve and teach in other cities and towns.

The Imagery of the Oxen 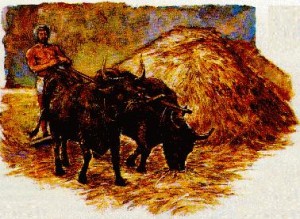 Even the image of a man who plants a vineyard and the oxen who treads out the grain support this perspective. Most often, we read these verses as talking about a vineyard owner and an oxen owner, and how the vineyard owner is the one who plants the vineyard and enjoys its harvest, and the oxen owner is the one who should not muzzle the ox, but let it eat some grain at the mill. This, however, does not reflect what actually happened in the culture, or what these images mean.

First, a vineyard owner rarely planted his own vineyard. Rather, he would hire people to plant and tend the vines for him. As part of their pay, these hired laborers were allowed to eat of the grapes while they pruned and harvested.

Similarly, no oxen owner would ever muzzle his own oxen while it was treading out the grain. This would be like a modern day farmer allowing his tractor to run out of gas.

So Deuteronomy 25:4 refers to the scenario of a man who borrows his neighbor’s oxen. In such a case, the man should not try to boost his own profits by muzzling his neighbor’s oxen so they cannot eat while treading out the grain. This is cruel to the oxen, and does not show appreciation to the man who owns the oxen.

Again, to use modern farming imagery, this would be like borrowing your neighbor’s tractor, using it all day, and then returning it with an empty gas tank. Such things should not happen.

Paul then is comparing himself (and all apostles) to a borrowed oxen, a traveling soldier, or someone who tends another man’s field.

To take the Gospel to other areas, an apostle must leave their house and job, and travel to other areas where they must usually depend on the hospitality and provision of others. Paul, however, as a tentmaker, had a profession which travelled with him, or at least allowed himself to get work with other tentmakers in the various cities he traveled to (cf. Acts 18:1-3). Not all apostles enjoyed such flexibility with their trade, and so they were dependent upon others to provide for their needs while they travelled away from home.

Nevertheless, when they returned home, to their families and to their jobs, they no longer depended on others, but labored with their own hands to provide for their needs. This, as we have seen, was Paul’s instructions to the Ephesian elders who stayed in Ephesus, and, we presume, the same instructions he gave to all church elders and leaders everywhere he went.

So 1 Corinthians 9 cannot be used by pastors to defend the practice of receiving a salary. It is talking about traveling missionaries and apostolic leaders who have left their home and jobs to teach and support other Christians in other towns. Since they will typically only be in a city or town for a few weeks or months, they are dependent upon the hospitality of the people in that city or town. Ideally, even these spiritual leaders should have “travelling professions” if possible, so like Paul, they do not have to depend on the financial aid of other people either.

Pastors, however, stay in one area, and Paul’s instruction to them is that they work hard with their hands, providing for themselves, their families, and the weaker members of the church with the income they receive from their trade.