You are here: Home / Is God a Psychotic Mass Murderer who Drowns Babies?

Bill Maher is back at it…

Late night comedian Bill Maher told his HBO “Real Time” audience on Friday that God was a “psychotic mass murderer.” He made the comments during a conversation on the biblical story of Noah and the upcoming Hollywood version of it that’s about to hit the big screen.

“But the thing that’s really disturbing about Noah isn’t that it’s silly, it’s that it’s immoral. It’s about a psychotic mass murderer who gets away with it, and his name is God,” Mr. Maher said, adding, “What kind of tyrant punishes everyone just to get back at the few he’s mad at? I mean, besides Chris Christie.”

Mr. Maher continued: “Hey God, you know you’re kind of a [expletive] when you’re in a movie with Russell Crowe and you’re the one with anger issues. … Conservatives are always going on about how Americans are losing their values and their morality, well maybe it’s because you worship a guy who drowns babies.” [Source]

This is exactly why I am trying to write my book on the violence of God in the Bible. Christians have never had a good answer to the sorts of criticisms raised by Bill Maher.

It is NOT good enough to say, “Well, you don’t understand how evil the people were …” or “We may not understand why God did it, but we know that since God is just and righteous, even things that appear evil are actually good.”

I was recently talking with someone about the violence of God in the Bible and I pointed out that we Christians have no problem condemning the violence that Allah commands Muslims to carry out in his name … why is it okay for God to tell His people to carry out that same sort of violence? 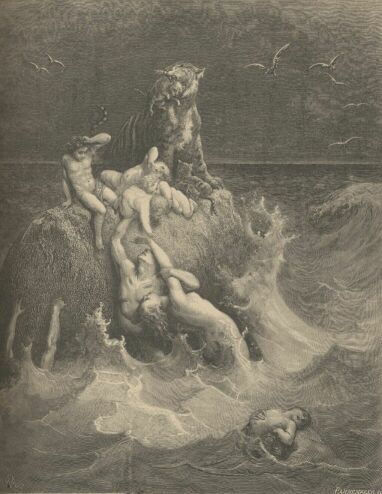 Here is how he answered: “Because our God is the one true God. The Muslims carry out their violence because they want to, and then they attach Allah’s name to their violence to justify their behavior. It’s different for people in the Bible because God truly commanded them to do what they did.”

I didn’t say it then, but this is what I thought: “If that is so, the Muslims are more righteous than we are. Which is worse? To blame a false god for the evil in your heart, or to actually worship and follow the evil instructions of God and call it good?”

Please do not misunderstand! I am NOT saying God is evil! No! Far from it!

I am saying God is good. Perfectly good. God is holy, loving, merciful, and kind.

I am saying that God looks like Jesus, and the God that Jesus reveals to us would NEVER drown babies or command people to slaughter women and children.

I am saying that Christians have never had a good answer to the sort of accusation the Bill Maher levels against Christianity. And no, this is not just Bill Maher vying for attention. Bill Maher puts into words (as only Bill Maher can) what countless millions of people actually think: They may say that they don’t want to be a Christian because they don’t want to follow all the rules, or have been burned by the church, or it would ruin all their “fun.” But these are all lame excuses.

The deep truth, the hidden secret, the thing that most people are too kind to say out loud, is that many people don’t want to become Christians because they do not want to worship the Christian God. Why not? Because according to Scripture (and according to the teaching of many who bear His name), God is the greatest villain in the universe and the only reason He gets away with it is because He is also the most powerful being in the universe.

If God did the things Scripture says He did, but as a mere human, He would be the most hated person in all of history. Are we going to give Him a pass simply because He’s “God”?

Bill Maher says “No.” God doesn’t get a pass.

I agree with Maher.

But I don’t follow Maher in condemning God. No, there is another way of seeing God in the light of Jesus which helps us read the violent depictions of God in a whole new light.

I have been studying and thinking about this subject for fifteen years so far, and have been working on a book for over a year which explains my proposal, but I am facing problems with putting it into words.

Anyway, I just wanted to let you know that more is coming … and soon …