You are here: Home / God Takes Responsibility for the Flood 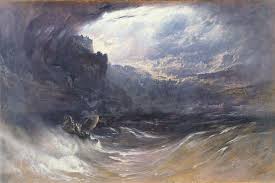 When bad things happen in this world, God often takes the responsibility for them because He is the one who created a universe where such evil things are possible.

When God created the world, He did not plan for sin to enter the world and for things to get so bad that eventually He would have to send a flood to wipe out every living thing on earth. No, what happened to creation was due to human activity; not divine.

Nevertheless, “God bears some responsibility for setting up the creation in such a way that it could go wrong and have such devastating effects” (Fretheim, God and World, 82).

The Flood Happened on God’s Watch

When the flood came, the text only has the waters as the subject of the verbs; not God. It says the “waters of the flood came upon the earth” (Genesis 7:10, NAS) and “the fountains of the great deep burst open” (Genesis 7:11, NAS). The only verbs ascribed to God in the actual flood event are when He moves to restore, save, and deliver. It is God who shut Noah and his family into the ark (Genesis 7:16), and sent the wind over the earth (Genesis 8:1). “The flood is described in natural terms as the effects of sins (of violence in particular) with no divine act of intervention; only with the subsiding of the waters is God’s activity stated explicitly” (Fretheim, God and World, 80).

Why then did God state that He would send the flood?

God said He would send the flood because He was taking the blame for the way the world had gone.

God inspired the Biblical author to record that He sent the flood, not because He did send it, but because it was such a terrible thing that happened in His creation and as a good God who watches over His creation, He takes responsibility for things that happen in His world, even though He Himself did not “do” it.

Over and over in Genesis 7, the account says that the “water” killed every living thing (Genesis 7:17, 18, 19, 20, 24). The author of Genesis 7 is using the cosmic warfare motif to show that the waters are responsible for the death of everything that breaths; not God.

Here is one place where alternative translations from the Hebrew are justified, as found in various English translations. Most English translations provide the word “He” (some even blatantly put in “God”) as the subject of the opening statement in Genesis 7:23. The New King James Version is one example (cf. also ESV, NAS, NET, NLT, RSV):

So He destroyed all living things which were on the face of the ground: both man and cattle, creeping thing and bird of the air. They were destroyed from the earth. Only Noah and those who were with him in the ark remained alive.

But the Hebrew is vague about God’s involvement in sending the flood and destroying everything on earth that breathes. The King James Version shows the lack of clarity in the verse (cf. also NIV, NJB): 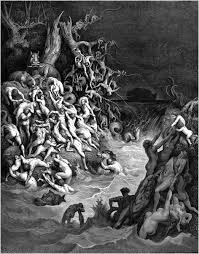 And every living substance was destroyed which was upon the face of the ground, both man, and cattle, and the creeping things, and the fowl of the heaven; and they were destroyed from the earth: and Noah only remained alive, and they that were with him in the ark.

This translation more closely resembles the surrounding context. The agent of the destruction is left unclear, though the immediately surrounding context indicates that the waters of the flood were responsible for taking the breath from every living thing.

In the end, the Genesis flood paints the portrait both ways. In some instances, God takes the blame for the death and destruction of all that breathes upon the earth, but in other verses, the guilty party is not so clear. It is my belief that the vagueness of the text is intentional. It is to show the reader—especially those who are aware of the cosmic warfare elements of this passage—that something might be going on behind the scenes which a quick surface-level reading of the text does not initially reveal.

Reading about the Flood through Christological Eyes

We now know, however, as we read about the flood through the lens of Jesus Christ, that God did not send the flood. The flood came as a result of humanity’s great evil upon the earth.

When we consider the various elements of the Chaos Theory, it seems that this particular event may have been a mixture of nature being out of control and the destroyer seeking to destroy God’s good creation. God, of course, since He has a policy of non-intervention, let nature run its course but used His wisdom and mercy to raise up Noah to build an ark and proclaim the coming flood to any and all who would listen, repent, and be saved. In the end, however, only eight were rescued through the flood. All the rest of mankind kept themselves cut off and separated from the protective hand of God.

This way of reading the text allows God to look more like Jesus Christ and less like the gods of ancient Egypt and Mesopotamia (and even most gods of our own day) who hurl fire, lighting, drought, and flood upon those who displease them. Jesus is not like that.

He blesses His enemies and forgives those who persecute Him. He represents a God who is love, who sends rain the righteous and the unrighteous, and the sun on the evil and the good. God did not send the flood. It came as a natural consequence of the great evil that was upon the earth, and specifically in response to the evil of the sons of God having children with the daughters of men. Since there is a bond between mankind and creation, when humanity falls into evil, creation falls into chaos along with it.