You are here: Home / The Gospel and Politics 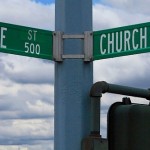 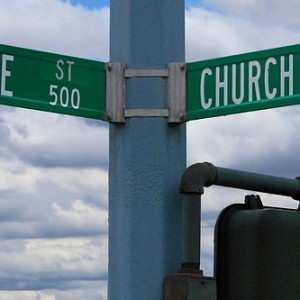 We can thank God that we live in a country where we have the freedom of religion, but we must be careful how we go about trying to maintain it.

But such things are not necessary for following Jesus, and depending on such things may actually lead us away from the values of Jesus and the Kingdom of God.

put it this way:

…The question is not whether the church has the freedom to preach the gospel in America, but whether the church in America preaches the gospel as truth. The question is not whether we have freedom of religion and a corresponding limited state in America, but whether we have a church that has a people capable of saying no to the state. No state, particularly a democratic state, is kept limited by constitutions, but rather states are limited by people with the imagination and courage to challenge the inveterate temptation of the state to ask us to compromise our loyalty to God.

In other words, by looking to the state to affirm our right to practice religion, we have sacrificed our ability to be the voice of conscience to the state. Depending on the government for our freedom of religion has made us a government chaplain in the pay of the state, afraid of losing our jobs if we offend our employer.

By seeking the endorsement of the state, we cannot adequately preach and teach the truth of the gospel because this truth will offend the state. Since the state provides us with our moral and legal right to exist, we limit the truth of the gospel to spiritual platitudes about what happens to people after they die, ignoring the vast majority of the gospel message which criticize the powers that be and calls them back to obedience to the will of God.

We have sacrificed the truth of the gospel on the altar of political influence, and have traded the power of sacrificial service in the name of Jesus Christ for the power of being the moral majority and voting in the candidates whom we think will champion our political cause.

When we live this way, our lives and goals do not change when Kings die or new presidents are elected. Our lives and goals do not change if we live in an Atheistic, Communist country, a Muslim country, or a “Christian” country. Our ability to follow Jesus is not determined by the laws of religion within our country, but by the example of Jesus and the values of the Kingdom of God.