You are here: Home / Redeeming Church / I’m an Idiot, by the Grace of God 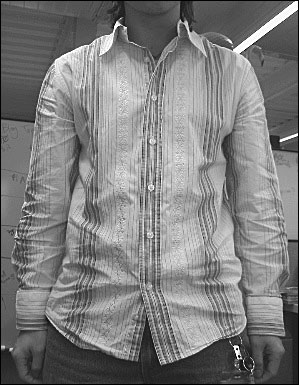 I went to a church planting event today [2015 note: This was written on June 26, 2007] sponsored by the Acts 29 Network. It was attended by 200 or so young men who want to plant churches around the county.

I came dressed in wrinkled Dockers and an untucked collared shirt. I was the best dressed person there. It seems the dress code requirement for future church planters of America is sandals, khaki shorts, wrinkled t-shirt, and a baseball hat, with a tall Starbucks in one hand, and an iPod in the other (soon to be replaced by the popular iPhone).

Also, looking around, I think I was the second oldest person there. There was one guy older than me. He had gray hair. Also, incidentally, he was better dressed than me. His shirt was long-sleeved, and tucked in. After registering, I noticed him up on the stage. The young guy next to me, who looked like he just rolled out of bed, was talking with another young guy (who was barefoot!), and said, “Who’s the old guy on the stage?”

I smiled, because I knew who it was. It was Aubrey Malphurs, the speaker for this church planting event. He is one of my professors at Dallas Theological Seminary, and his books are some of the best that are available on church leadership and planting. His book, Doing Church

, should be read by every Christian, whether they pastor a church or not.

But I thought it was interesting, especially as Malphurs took the stage, and ran into some technology problems, to watch some of the young punk pastors around me, sit back in their chairs, fold their arms, and basically shut off. You can almost hear their thoughts: “What can this old guy tell me about church planting? He can’t even work his microphone, or keep his Powerpoint on track with where he is in the notes. We’re a different generation, man. I’d leave now, but I want to stay for the free lunch.” The guy in front of me even pulled out a book and started reading.

Sure, Malphurs made some “mistakes” in talking to this younger generation. He began right off by apologizing for having bronchitis. This immediately cemented in our minds the stereotypical “old guy” who spends half his time talking about all his aches and pains. After this, he launched into a commercial for three of his books. He held the books up, and gave a brief summary of each one, and how we could purchase them at the book table.

For the young pastors in the group, this smacked of self-promotion, and Malphurs seemed to sense this, because when he was done, he said, “Well, enough of selling my own books.” The guy behind me whispered under his breath, “Amen.” I rolled my eyes at him…but since he was looking at the back of my head, he didn’t see me do it. I am very brave.

This is when it dawned on me. We’re a bunch of arrogant fools.

I’m including myself in this, more so than the others.

Most of them, probably, had time in the Word with God this morning, and I didn’t.

Most of them probably shared Christ with someone at Starbucks this morning, while I just glared at the guy in front of me at the Seven Eleven for asking stupid questions about AAA batteries to the Muslim man behind the counter who clearly knew nothing about batteries.

And the young barefoot pastor? Well, those of you who know me know I hate shoes. I wish I had thought to come barefoot.

Regarding Malphurs and his books, the truth is that we were all just jealous of his many books. I know I am.

The truth is that us young bucks can learn a lot from the older generation, but at the same time, many of the older generation need to be more like Aubrey Malphurs. He is a student of culture, an expert on the church, and knows the difference between the Biblical theology of the church, and the historical tradition of church. He knows that most of what passes for “church” in Christianity, is far from what the church is meant to be. He knows that most of what is “sacred” in churches today needs to be tossed into the trash.

And most of all, each and every one of us, myself more than others, needs to be less critical of one another. To our own master we stand or fall. If I’m going to criticize someone, I need to criticize me. Take the plank out of my own eye, and all of that. Each of us must remember what we learned in kindergarten, that when I point the finger at someone else, there are three fingers pointed back at me. The best thing we can remember when we criticize someone else is, “We’re all idiots. And if I feel I’m better than all of them, it is only because by the grace of God, I am chief among them.”