You are here: Home / Keys to the Kingdom of Heaven 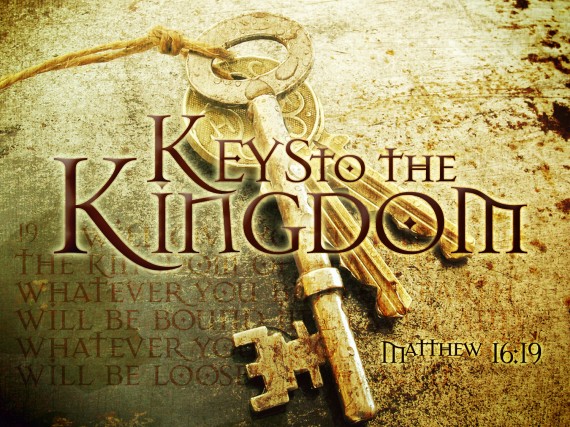 Lots of churches and church leaders want to use Matthew 16:19 and Jesus’ statement to Peter about the keys of the kingdom of heaven as justification for judging and condemning others for their beliefs or their behavior. We saw yesterday in my post about Locking Others out of Heaven that there are two main views about Matthew 16:19.

Some think that we do have this authority, or at least, some church leaders (such as the Pope) have it. When a decision is made by the church, or one of these select leaders, Jesus “rubber stamps” it from heaven.

The other main view is based off the “periphrastic future-perfect passive participles” of the verse, and says that the decisions which are made on earth, are decisions that have already been made in heaven, and we are simply implementing these decisions here.

I suppose that when it comes to translating the verse, I side with the “periphrastic future-perfect passive participle” view.

But frankly, with my understanding of the verse, it really doesn’t matter too much how you translate the words, or whether you know what a “periphrastic future-perfect passive participle” is.

I am convinced that most of the big theological debates in church history are a result of theological sleight of hand. It’s like in a magic trick when the magician is waving one hand about, with lots of color, light, and flourishes, that is the time to watch what his other hand is doing. If he says, “Look over there at my beautiful, scantily clad, periphrastic future-perfect passive participle partner!” that is the time to look the other way, and see what is happening on the other side of the stage.

When it comes to Matthew 16:19, the events on the other side of the stage is the phrase “Kingdom of heaven.” Most of the lights and fireworks of the debate surrounding Matthew 16:19 have focused on who Jesus is speaking to, whether it applies to the church or not, and how to translate the “periphrastic future-perfect passive participles.”

Almost nobody asks what Jesus meant by “Kingdom of heaven,” which is where the solution to this verse lies.

What is the Kingdom of Heaven?

This idea fits well with what Jesus says about binding and loosing in Matthew 16:19. He is saying that the laws and decisions which have been in effect in heaven are now coming to earth. What has been bound and loosed in heaven, will now also be bound and loosed on earth.

But there is no idea here of apostolic succession from Peter to the Pope. Jesus does not say that He is giving the keys of the kingdom of heaven to Peter and to all who follow Peter, or to all future church leaders, or even to the church itself. What Jesus says to Peter was a task for Peter alone.

And what was that task? 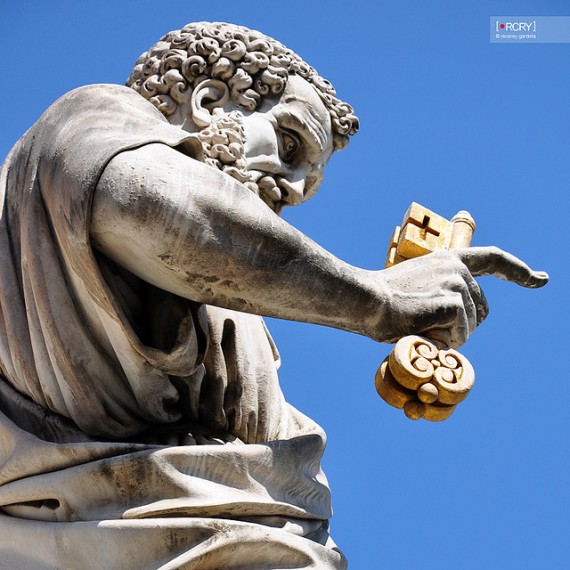 The Task of Peter

Jesus gave spiritual keys to Peter: keys of the kingdom of heaven.

And what are keys good for? They open doors. They unlock gates. What gates?

In the immediately preceding verse, Matthew 16:18, Jesus talked about some particular gates: the gates of hell.

The task of Peter is to unlock the gates of hell.

The Gates of Hell

And what is behind the gates of hell?

Only one thing: people. 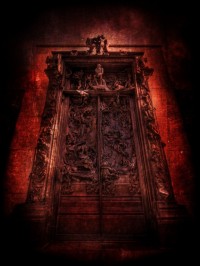 Jesus is not referring to a place of eternal conscious torment, but rather, a life of spiritual bondage to sin. Locked up behind the gates of hell are people on this earth who have been enslaved to sin and Satan, and one of the primary tasks of Jesus and His church is to set these people free, to proclaim liberty to the captives, and set free those who are oppressed (Luke 4:18).  If they do not escape the gates of hell, they will spend this life and eternity in hell.  But when the gates of hell are opened with the keys of the kingdom of heaven, the people who were trapped inside can now come out from oppression and bondage, and enter into the freedom and joy of the kingdom of heaven.

The Apostle Paul in his letters, referred to this barrier not as the gates of hell, but as the dividing wall of hostility (Eph 2:14). He indicates that those who were behind the wall had no hope and were without God in the world, but this wall was broken down so that the two people groups on earth, the Jews and Gentiles, could become one new people group, the church. The church as the new people of God who follow Jesus into the world, declaring, proclaiming, and revealing a new way of living according to the ways of the kingdom of heaven.

So all of this is what I think Jesus meant when he gave the keys of the kingdom of heaven to Peter.

But if they were for Peter’s use, to open the gates of hell, did Peter use them? If so, where? When? How? I will answer these questions tomorrow.