You are here: Home / No Right to Free Speech 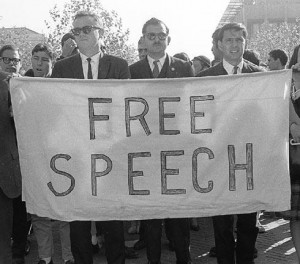 In many places in the world, people have to be careful about what they say, and to whom they say it, especially when talking about their government. In general, people who live in most Western nations do not have this fear. We have the right to publically state our opinion about what others are doing, and even disagree with the direction our government is taking.

This is a wonderful and amazing freedom, as people in power do not usually like to see dissent from those who have less power.

Certainly, there are some areas where the freedom of speech is restricted, such as shouting “fire” in a movie theater, talking about bombs on an airplane, and all forms of hate speech against people of other races or religions. But beyond this, the freedom of speech is a valuable right that we enjoy, and which, at least in the United States, is guaranteed by the First Amendment to the Constitution.

But just as with all the other rights in the Constitution, this one also can be abused, especially when divorced from godly values and perspectives. When people lose their respect for others, and stop believing that all people have basic human dignity and value, the freedom of speech can become a curse.

When the freedom of speech is divorced from God, people feel they have the right to say any mean and nasty thing they want about other people, simply because they have the freedom of speech. Apart from the values of God, free speech often degenerates into hate speech, and the right to free speech is used as an excuse to slander, gossip, and ridicule others.

Most tragically of all, the church is not immune to such abuses of the right of free speech. Some of the most hateful and hurtful things get said about other people and other religions from our pulpits and in our books. We feel that our freedom of speech and our position of being “right” allows us to publicly rebuke others, and say whatever we want about others, even if what we say is hurtful, slanderous, and mean-spirited.

But this is not the way of the gospel. When zeal for the truth causes Christians to speak in mean and hurtful ways, we are justified in questioning whether they really have the truth at all. The truth, when it is properly known, understood, and taught, will always be spoken with love toward other people.

Note: Here is a good article I recently read on this subject: No Freedom of Speech for Christians