You are here: Home / z / The Primary Problem with Theology

The primary problem with theology is that it asks questions. This doesn’t sound like a problem, until you realize the danger of questions.

Yesterday we looked at a famous theological question from the days of Jesus, and I suggested that Jesus hated the question, especially when the person that the debate was about was standing right in front of Jesus with a need that could be met.

When theology gets in the way of loving others, Jesus throws theology out the window.

The reason Jesus asked the question is because He knew the answer, and He hated the answer.

By asking the question, Jesus is saying, “While you religious leaders come up with your theologically correct answer to determine whether or not you can heal on the Sabbath, here is a real, live human being who is hurting and in need of your help, and all you can do is sit there and debate about him like he was a log blocking the road.”

This incident is told in story form later with the parable of the Good Samaritan (Luke 10:25-37). There, theology kept some Jewish people from helping out a fellow Jew. But then Jesus shows a man who had theological (and cultural) reasons for not helping the wounded man, and helped him anyway.

The point is that when a person is in front of you who needs help, forget all your theology, and just help! They are people in need of help, not exhibits in a theological debate.

On this particular Sabbath in the Synagogue, Jesus wanted to show those who were gathered that they were being legalistic with the Sabbath. Rather than understanding the heart of God and using the Sabbath to love others, they were using the rules and regulations of the Sabbath to keep themselves from loving others.

The Sabbath was a day to show love to others, to do good to others, and that is what Jesus was trying to teach. 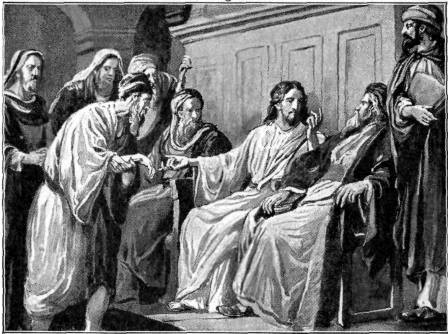 Now, the question is a bit removed from us today, because most of us don’t observe the Sabbath.

So let me bring it into real life for us. Here is what Jesus would do today:

He would show up in a church on a Sunday morning when a young woman visited who was 17, unmarried, without a job, pregnant, and considering an abortion. Jesus would stand up and say, “What do you think, should abortion be allowed or not?”

He would show up in a church on a Sunday when a homosexual couple visits the church, and Jesus would stand up and ask, “What do you think, should homosexuals be allowed to get married, or not?”

Jesus would show up in a church on a Sunday when a drug addict visits, and Jesus would ask, “What do you think, should the medicinal use of marijuana be legalized or not?”

You see how this works?

Jesus cares about the person.

And that includes you and me.

Jesus cares about our hurts, our worries, our struggles. And He wants to see each and every one of us healed and be delivered from what has us in bondage. Whether we are that teenage girl, or that drug addict, or we struggle with pornography, or materialism and greed, lying, stealing, or overeating.

But those are the questions and comments of Pharisees. They would rather talk and debate about such issues than actually help. It’s not that knowing the truth is wrong.

It is that debating the truth is wrong when it paralyzes us into inactivity.

The Pharisees, like too many of us today, got too caught up in the political and theological debates which focus on the issues, and completely ignored the people who were in need.

We think it reads, “Anyone who knows the good he ought to do, doesn’t have to do it if he can articulate his opinion, write letters to the editor and votes on election day.”

We think James 4:17 reads, “Anyone who knows the good he ought to do, doesn’t have to do it if he can defend his views to others, and write a check to local charity.”