Yesterday we considered the problem with the Calvinistic ordo salutis in Romans 8:28-30.

I suggested that there is a different way of understanding this text in light of Paul’s overall argument. We consider this alternative today.

The first thing to consider is the “golden chain” which begins with the foreknowledge of God and ends with glorification. 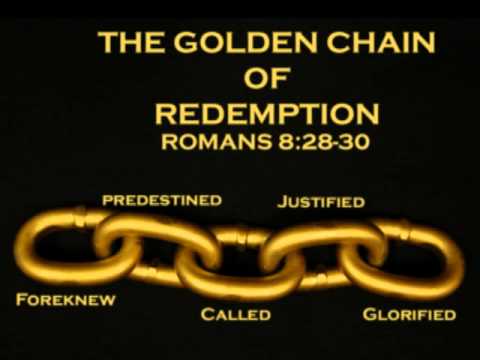 Most Calvinists would agree with this, and say that this proves that God has some sort of eternal divine foreknowledge of all things. But note what happens when we apply this sort of foreknowledge to Romans 8:29-30.

All those whom God foreknew (which is everybody and everything), are also those who are predestined, called, justified, and glorified. Understanding God’s foreknowledge in Romans 8:29-30 as encompassing all people leads to the inevitable conclusion that all people will be glorified. But if only a certain group of people out of all humanity will be glorified, then this leads us backward through the “golden chain” to see that God’s foreknowledge is also limited to a certain group of people.

In other words, we must either say that this verse teaches universalism, or that we have misunderstood the terms and logic Paul uses in this text. I vote for the latter.

Greg Boyd is exactly right when he says this about Romans 8:28-30:

… It is more likely that Paul is using the term know in the customary Semitic sense of affection rather than in a merely cognitive sense. To “know” someone is to love that one. So to “foreknow” someone means to love that one ahead of time. Three chapters later Paul refers to Israel as “[God’s] people whom he foreknew” (Rom 11:2). If this is in fact its meaning in 8:29, then Paul is simply claiming that God loved the church before he called them just as he loved Israel before he called them.

… What God loved ahead of time (ultimately from the foundation of the world) was the bride of Christ, the body of Christ, the church considered as a corporate whole (Boyd, Satan and the Problem of Evil, 118. Such a view is not without significant lexical challenges, however. See Olson, Beyond Calvinism and Arminianism, 152-173).

Whatever foreknowledge Paul is talking about, he is not referring to some sort of exhaustive, all-encompassing knowledge of all events and all people from before all time, for this would lead to the conclusion that all those whom God foreknows will end up in glorification.

So what is Paul saying?

First, we must remember that in Scripture, and especially in Pauline theology, Jesus Christ is the ultimate elect one, and individual people become elect, not through an eternal divine decree from God, but by joining with Christ by faith.

In other words, God does not predestine or elect people to be in Christ; no, God elects Jesus, and by default, all who join with Jesus by faith also become elect as members of the “body of Christ.” 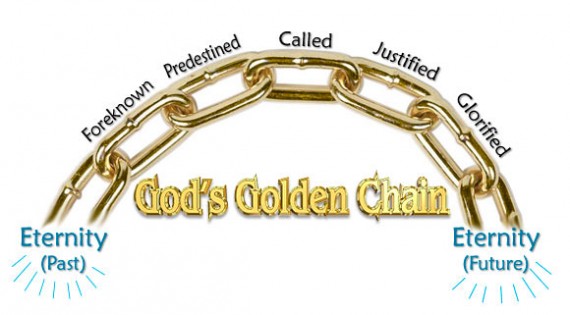 Second, we must also recall that election is not to eternal life, but to service.

God does not choose, out of the mass of humanity, some to spend eternity with Him in heaven, while all others are destined for eternal suffering in hell. This is not the biblical teaching of election.

Instead, election is to service, and God chooses some out of the mass of humanity to serve Him or perform certain tasks to accomplish His will in human history.

While He sometimes chooses unregenerate individuals for this purpose (such as King Cyrus, Judas, and a few others), all who are in Jesus Christ automatically become “elect” in Christ. That is, all who become members of the body of Christ are also elected or chosen by God to serve God’s purposes in this world.

These two points help us understand what Paul is saying in Romans 8:28-30.

Note that when Paul introduces the idea of God’s calling in Romans 8:28, he says that this calling is “according to His purpose.” And what is God’s purpose? In Romans 8:29, Paul states that those whom God foreknew, He predestined to be conformed to the image of His Son.

We can see this more clearly if we include some elements in Paul’s “golden chain” which he left out.

For example, though Scripture includes proclaiming the gospel, human faith, Spiritual regeneration, and sanctification into the theological chain of events which contribute to the “salvation package,” Paul makes no mention of these.

If we were to include these other four terms inside Paul’s chain of events, the list would look like this: Foreknowledge, predestination, proclaiming the gospel, faith, regeneration, calling, justification, faithfulness, sanctification, glorification.

Note that in this list, regeneration, calling, and justification are simultaneous events which follow faith but precede sanctification (cf. Jude 1). When a person responds to the gospel in faith, God regenerates them to new life, calls them to a specific purpose, and declares them righteous in His sight.

I do not, of course, want to add words to what Paul is saying. He included the terms he did because he wanted to make a specific point to his readers.

In Romans 8, Paul’s emphasis is on God’s part in the plan of salvation. There is nothing in Romans 8:28-30 about a human’s responsibility to believe in Jesus or to walk by faith for sanctification. 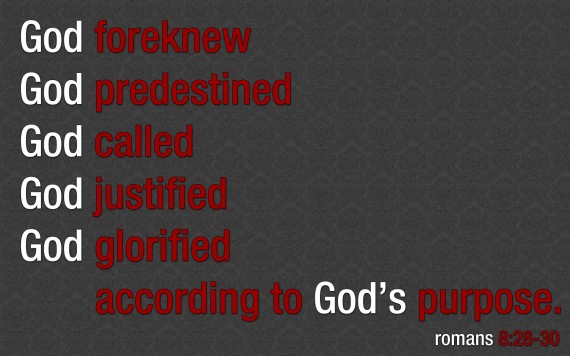 Paul is emphasizing God’s role while ignoring man’s role, but this does not mean that mankind has no role.

In the overall scheme of redemption, God alone is the one who foreknows what He will do, takes steps to make sure it happens, calls believers to a greater purpose in service to Him, justifies those who believe, and glorifies for eternity all whom He justified.

In Romans 8:28-30, Paul is not talking about an eternal decree from eternity past about to whom He would give eternal life, but rather, God’s plan from eternity past to bring those who believe in Jesus into conformity to the image of Jesus Christ, which does not fully occur until glorification (cf. Eph 1:4; 4:1; 5:27; Col 1:22-23).

This fits with everything we have seen about election so far. In Romans 8:28-30, Paul is saying nothing about God’s predestination of some to eternal life.

Instead, Paul is saying that God decided in eternity past to make sure that everyone and anyone who joins His family by faith will finally and ultimately be brought into conformity to Jesus Christ at their glorification.

Foreknowledge is not God’s plan from all eternity about whom to give eternal life. It is simply God’s plan about what to do with those who believed.

Since election is to service, God’s foreknowledge does not include the election of individuals to eternal life. God’s predestination is His commitment to carry out His plan. “And what is God’s plan? To bring all who have responded to God’s initiative with love to salvation, to eternal bliss” (Pilch, Cultural World of the Apostles, 91).

This understanding of Romans 8:28-30 fits perfectly within the broader context of Romans 8 as well.

In this section of Romans, Paul is writing to Christians who are facing severe testing and trials as a result of their faith in Jesus (cf. Romans 8:17-18).

But Paul wants to encourage his readers by telling them that the suffering they face will result in glory, and that absolutely nothing can separate them from God’s love or God’s purpose in their lives (Romans 8:31-39).

In light of this, the foreknowledge of God takes on a special intimacy and mercy for all who are part of the people of God. Paul’s point in Romans 8 is that God determined from eternity past to bring us to glorification despite our many weaknesses and failures.

God elected and predetermined a destiny for his people in full knowledge of what they were, what they would be without his intervention, and, most significantly, what they would become as a result of his grace on their behalf (Klein, The New Chosen People, 164).

In this way, there is great encouragement in Paul’s words.

Many of the people to whom he is writing (just like many people today), were struggling with feelings of inadequacy, guilt, failure, fear, and doubt. Paul wanted them to know that God knew all about these things from eternity past, and it didn’t stop Him from initiating His plan to rescue and redeem the world, and since God predestined such a plan, He will take care of everything necessary to bring it to completion, which will result in our glorification (cf. Romans 8:31-39).

Ultimately, the whole discussion about the ordo salutis in Romans 8 leads the student of Scripture in the wrong direction about Paul’s point. Paul is not so concerned with laying down a guideline about what happens in which order. He is not intent on describing each individual step in God’s plan of salvation.

Instead, Paul’s only point in writing Romans 8:28-30 is to encourage Christians that no matter what happens to them, God is with them, will not abandon them, and just as He has had them in mind since before the foundation of the world, He will not abandon them to the trials and testing they are facing.

If God is the only one who could bring a charge against them, but He will not do so, and instead, delivered His own Son up for us all  (Romans 8:31-34), then we can be sure that absolutely nothing will separate us from the love of God (Romans 8:35-39). If God is for us, who can condemn us? Jesus could. But rather than condemn us, Jesus intercedes for us!

This is an astounding message from Paul which all believers need to hear.

[Paul] is speaking to Christians, about Christians, and to reassure them of God’s love for them and God’s desire for them to cooperate with his Spirit in working for good and in overcoming all tribulation (Marston and Forster, God’s Strategy in Human History, 245).

In Romans 8, Paul is not laying out some sort of mysterious outworking of God’s divine decree, but is describing in great detail the height, breadth, width, and depth of God’s love for His people.

He loves us, has always loved us, and will always love us. He set the plan of redemption in place, and He will bring it to completion. This is Paul’s point in Romans 8.