You are here: Home / A Brief History of the Sabbath-to-Sunday Transition

On Friday, I asked the question about why Christians meet on Sunday rather than on Saturday. The issue is that while many Christians think Sunday is the Sabbath, a day to refrain from working, Saturday is actually the Sabbath. Since Jesus and His disciples observed the Sabbath by ceasing to work and attending a local synagogue, shouldn’t we do the same thing?

I say “No.” But I don’t think we must worship on Sunday either.

Below is a brief history of the Sabbath-to-Sunday transition, and we will look next at the question about which day of the week Christians should worship God, and whether or not Christians should observe the Sabbath. If you have been reading this blog for more than a week or two, you probably already know how I will answer these questions…

The History of Sunday Church Services

First, it is true that in the Old Testament, the Sabbath was observed on Saturday, the seventh and last day of the week. It was to be a day of resting, reflecting and rejoicing. The basis for this was in God taking a day of rest after six days of creating the world.

One of the things this book fails to recognize is that the Sabbath is actually a sign of the Mosaic covenant. Any time God makes a covenant, He provides a sign, or a symbol to go along with it so that we can remember what He has promised.

God gave the rainbow to Noah. H gave circumcision to Abraham. The Sabbath was the sign of the Mosaic covenant between God and Israel (Exod 31:12-17; Ezek 20:12).

But since we do not live under the Mosaic Covenant, but under the New Covenant, we do not have to keep the Sabbath in the same way the Jewish people did. This is one of the main reasons early believers stopped meeting on Saturday.

But why did they start meeting on Sunday? Though they were living under the New Covenant, they could have continued to meet on Saturday, or for that matter, any day of the week! Why did they choose Sunday?

For one reason only: Jesus Christ rose from the dead on Sunday, the first day of the week. Since it was on Sunday that Jesus rose, it became known as “the Lord’s Day.” It also became a day set aside for the Lord, a day to “tithe” part of your week, a day to remember the most significant event in the history of the universe – the Resurrection of Jesus from the dead.

So Christians did not decide to meet on Sunday because God did not change the Sabbath from Saturday to Sunday. No. The Sabbath has always been Saturday, and still is.  Christians just started meeting on Sunday to commemorate the resurrection of Jesus on that day. 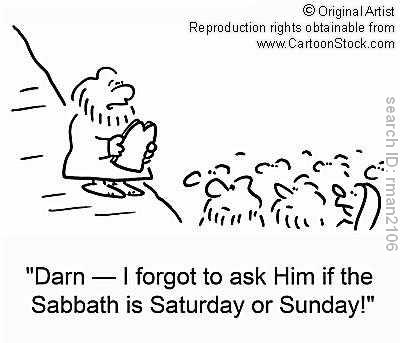 The Scriptures for Sunday Church Services

There are numerous passages in the Bible which show this development in the early church. Here are a few:

In the book of Acts, the early Christians met on the Lord’s Day, on the first day of the week to celebrate the Lord’s resurrection and eventual return (Acts 20:7).

In 1 Corinthians 16, Paul instructed the Christians to take an offering on the first day of the week when they met.

In Revelation 1:10, the apostle John, while in exile on the island of Patmos, held his own little church service on the Lord’s Day, and it was on that day which he received his Revelation about the end times.

Furthermore, in church history, we read that by 115 A.D., Christians had ceased to keep the Sabbath, and lived by the Lord’s Day, the first day of the week. They gathered to sing, study the Word of God, pray, and fellowship together.

If you want to read more about this, I recommend Sabbath in Crisis

This post is based off the Grace Commentary for Luke 6:6-11.