You are here: Home / The Grand Paradox by Ken Wytsma 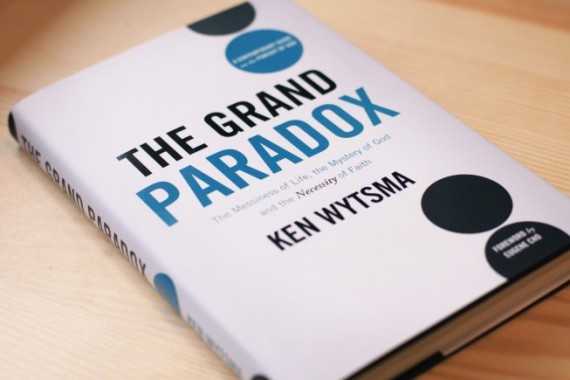 Ken Wytsma recently sent me his new book, The Grand Paradox, for review. I really, really wanted to like this book, since it came so highly recommended by numerous authors and scholars that I deeply respect.

Yet I must confess that as I read the book, I had trouble understanding what the book was about. And after having read the book, I am still not sure I know what “the grand paradox” is. I failed to see how one chapter led to another, or how each chapter contributed to an overall big picture theme or idea.

Don’t get me wrong, Ken Wytsma is a good writer with great ideas. Each chapter individually (except for one … more on that in a bit) is a good on a particular topic. I really enjoyed the chapters on justice and doubt. I just didn’t see how the chapters moved the reader toward any sort of cohesive idea, decision, insight, or new understanding.

There were several insights and ideas I found inspiring throughout the book, such as this one on love and justice:

For those who truly care about love and justice, one of the most disappointing experiences in religion is when it becomes a man-made system of conformity and standardization that we use to judge each other. (p. 95)

On the other hand, I disagreed with much of he wrote in chapter 12, titled “Mother Kirk.” Like many Christian leaders today, Wytsma is aware that countless Christians around the world are seeking to follow Jesus outside the four walls of institutional Christianity. That is, they want to follow Jesus without doing the “church thing” on Sunday morning.

Being a pastor of a megachurch himself, Wytsma naturally tries to discredit this way of following Jesus. But in doing so, he reveals that he doesn’t understand the heart or motives of these people, and even resorts to demeaning them with the derogatory label “terminal Christians” (p. 136). He goes on to make this absolutely shocking statement:

So according to Wytsma, if you decide to stop attending church, or if you are critical of various aspects or elements of the church, you are on your way to becoming separated from God Himself.

I imagine that in Wytsma’s mind, I might be one of those he labels as a “terminal Christian.” But if he were to sit down and talk with me and my wife, or with almost anyone who is on this same journey with God, I think he would discover that we are not falling away from God, but are drawing closer to Him and His people in ways that we never before thought possible–in ways we had only dreamed of when we were part of the institutional church.

Yes, it is true that people who leave the institutional church are often critical of what they left behind. I have contributed to that criticism myself. But this is not criticism of “the church” as much as it is the forms of church which we believe are keeping people from experiencing all that God has for them.

But watch this… if we who no longer sit in a pew on Sunday morning are also part of the family of God through our faith in Jesus, our commitment to follow Him, and our regular fellowship with other travelers on this road, then we too are part of the local and universal church, which means that when Wytsma criticizes us, he is criticizing “the church,” which means that according to his definition, he too is a terminal Christian and headed toward separation from God.

What am I saying? If you read this book, maybe just skip chapter 12, or if you do read it, just recognize that Wytsma is circling the wagons in an attempt to prop up a dying institution.

If you are part of a fellowship where they say that if you leave their church, or if you question or challenge what the church does or what the pastor says, that you are leaving God or challenging God’s ways, recognize that this is the guilt-based, fear-based, control-based system that forms the foundation of much of the modern “church,” and does not reflect the heart of Jesus for His Bride.

So what can I say about this book? Well, many of the chapters are insightful and helpful. I LOVED his chapter on justice. And if you want to read some thought-provoking s on various Christian topics from a leading church communicator, this might be a good book to try. Just be careful with chapter 12…