You are here: Home / The Tithing Tax 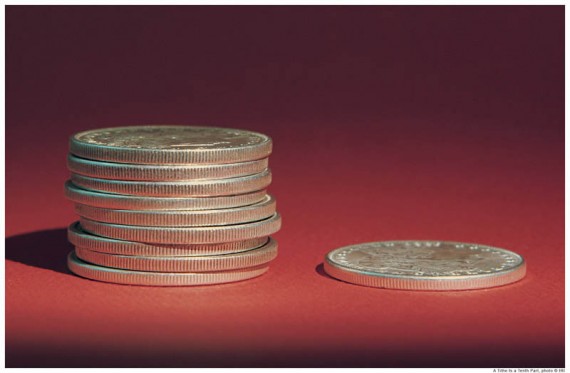 Under the Client-Patron system of church finances, the church buildings and most of the clergy were funded by the national and local governments. For the most part, this was the only way that churches and clergy received funding for the first 800 years of the church.

But in the ninth century, as the expense of financing all these churches and clergy became enormous, some local governments began to excise additional taxes on the people, which went to help cover the costs of maintaining the church buildings and clergy.

The Mosaic Law about the tithe was used to justify this additional tax. The explanation given to the people by the church and government authorities was that God instituted a ten percent tax on the people of Israel to support the Levitical Priesthood and the construction of the tabernacle and temple. This is not exactly true (as we will see below), but it is the explanation that was given when the government added a 10% tax on people to cover the costs of local church buildings and clergy.

However, this practice was not widespread until the late eighth century AD, when Emperor Charlemagne developed the parish system for the church. He wanted to control what the churches were teaching, and who the bishops and priests were in a particular church. So with the help of various church leaders, he developed the parish system, and exponentially increased the number of archbishops to oversee these various parishes. They were given the task, in coordination with the local political rulers, of hiring and paying clergy to oversee all the people in a particular parish.

And to cover these additional expenses, Emperor Charlemagne instituted a ten percent mandatory tax on all the people in the parish. Once again, the archbishops, priests, and political rulers based this tax off of the Mosaic principle of the ten percent tithe.

People still gave additional funds when they went to church, but these were not considered part of the “tithe.” These additional funds were “offerings” for which the people received additional services, such as baptisms, marriages, funerals, a personal Mass from the Priest, extra prayers said by a Monk, or even the forgiveness of sins.

Around 1200 AD, the tax burden on the poor had become so high, many of them cried out to their local priests and ruling authorities for relief. The vast majority had become quite wealthy from the tax system, and simply ignored the pleas. But some listened, and approached Pope Innocent III in Rome for a tax relief from the “tithe.” But in response, he ordered that tithes for the support of the church be given precedence over all other taxes.

This situation of viewing the “tithe” as a mandatory tax on all citizens of a particular parish continued until about 300 years ago, and the development of the novel idea about the separation of church and state.

Once the church divorced herself from the oversight and control of the local and national government, the church also no longer had the significant source of tax income which the government provided. But this was no problem, for the principle of the tithe was already firmly planted in the minds, theology, and practice of most people. Rather than funneling this ten percent tax through the government, the church now became the direct recipient. The church continued to teach the people that the principle of the tithe still stood, but that now, rather than send this money to the church through the government tax collectors, the people could give it directly to the church itself.

All of the same Scriptures and arguments were used. Though it was no longer thought of as a “tax” the church continued to teach that a tenth (or “tithe”) of a person’s income should go the church. They taught that this ten percent tithe was instituted by God through Abraham and Moses, and was supported the Prophets, Jesus, and the Apostles. The purpose in biblical times and in churches today was to maintain the church property and buildings, support the church priesthood and clergy, and help cover the costs of the church ministry and programs.

And that brings us to where we are today. Messages about Abraham’s tithe to Melchizedek, and the Mosaic law of giving ten percent are frequently heard from pulpits around the world. Christians of all types are encouraged to “give to Caesar what is Caesar’s and give to God what is God’s,” to be like the widow, who gave her last two pennies and so received the praise of Jesus, and to follow the instructions of Paul to give generously and joyfully for the ministry of the church.

Most people never question such teaching. We assume it is correct. We believe what we have been told: that money is the root of all evil, that we cannot love both God and mammon, and that best way to defeat the love of money is to give it away. We never question such teachings. We never even bother to look them up in Scripture. But if we did, we might be surprised at what we learn.