You are here: Home / Toppling the Domination System 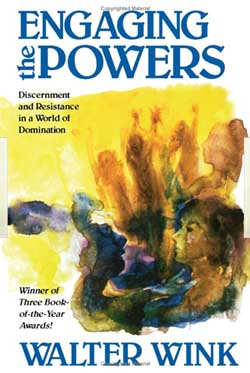 I am always looking for books that challenge the way I read Scripture and follow Jesus. “The Powers” Trilogy by Walter Wink has certainly done both.

I previously read and reviewed the first two books in the Trilogy:

The third book in the series is Engaging the Powers.

Of the three books, it may be the most practical, though the other two lay the biblical and theological groundwork for the ideas in this book. Unless you read the first two, the ideas of this book may sound outlandish, unsupported, and even extreme.

For example, in previous studies, Wink showed from cultural background studies of key texts in Scripture that certain Greek words might be translated in ways that better reflect the spiritual worldview of the authors, rather than our modern scientific worldview. Take the following words for example:

Reading the Gospels and the letters of Paul and Peter with these sorts of translations in mind provide a much different picture to their message than what is traditionally taught.

And it is from such a perspective that Walter Wink writes Engaging the Powers.

The most challenging idea of this book may be that the Powers are redeemable, and we humans are part of the means by which the Powers will be redeemed. Wink argues that the Powers were originally created by God for good purposes and functions within the universe, but through the fall, their purposes have been perverted. However, they can be returned to their good purposes, and this is one of the reasons Jesus came and died – to redeem not just humanity, but to redeem the entire universe, which includes the Powers.

It is an interesting concept, and one that Wink develops in practical ways throughout the book. He shows us how we can live in light of this future redemption here and now by living according to the principles of new reality (Kingdom of God) that Jesus inaugurated.

Specifically, he talks about how Christians can view war, love our enemies, live as the church, and pray for the world. All of his ideas in these areas are challenging.

Regarding war, Wink is not a pacifist, but he does not endorse war. He presents a third way of nonviolent engagement where we stand up to evil, but not with violence. He shows how we Christians have terribly misunderstood and misapplied the words of Jesus in Matthew 5:38-42 about turning the other cheek and walking the extra mile. These are not pacifistic, meek, and mild responses where we allow ourselves to get trampled on, but are actually subversive and empowering forms of standing up for our humanity in the face of dehumanizing evil.

His chapter on prayer was one of the best treatments of prayer I have ever read, right up there with the s on prayer by C.S. Lewis and the chapter on praying in the Whirlwind in Greg Boyd’s Satan & the Problem of Evil.

This was one of those books in which I underlined nearly every sentence, and for that reason, it found its way onto my “Burning Books” list. I highly recommend this book (and other others in the Trilogy.)

By the way, if you are not sure you want to read all three, Wink has just come out with a “summary” of the Trilogy. I haven’t read it yet, but it appears he has summarized all three book in The Powers That Be.

I will be reading it soon.