You are here: Home / Some Surprising Truths about God’s So-Called “Election” of Abram in Genesis 12:1-3 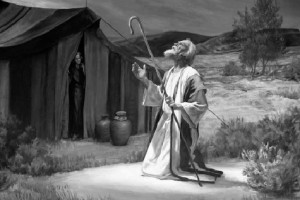 Though Genesis 12:1-3 does not contain the words “elect” or “chosen,” this passage is often cited as a defense of God’s Unconditional Election of some individuals for eternal life. In this text, God informs Abram that he will become the father of many nations so that through him, all people on earth might be blessed.

Now the Lord had said to Abram: “Get out of your country, from your family and from your father’s house, to a land that I will show you. I will make you a great nation; I will bless you And make your name great; and you shall be a blessing. I will bless those who bless you, and I will curse him who curses you; and in you all the families of the earth shall be blessed” (Genesis 12:1-3).

In referencing this texts, Calvinists often remind the reader that Terah, Abram’s father, was an idol-worshiper (Josh 24:2), and that if God had not unconditionally intervened in Abrams’ life, Abram would have been an idol-worshiper as well.

In fact, Abram may have been an idol-worshipper when God called him. Here, for example, is what John Calvin wrote about Genesis 12:1-3:

This calling of Abram is a signal instance of the gratuitous mercy of God. Had Abram been beforehand with God by any merit of works? Had Abram come to him, or conciliated his favor? Nay, we must ever recall to mind, (which I have before adduced from the passage in Joshua,) that he was plunged into the filth of idolatry; and now God freely stretches forth his hand to bring back the wanderer. He deigns to open his sacred mouth, that he may show to one, deceived by Satan’s wiles, the way of salvation (Calvin, Calvin’s Commentaries, I:343).

Then the Lord said, “Shall I hide from Abraham what I am about to do? Abraham will surely become a great and powerful nation, and all nations on earth will be blessed through him. For I have chosen him, so that he will direct his children and his household after him to keep the way of the Lord by doing what is right and just, so that the Lord will bring about for Abraham what he has promised him” (Genesis 18:17-19, NIV).

Several things can be said about the Calvinistic interpretation of Genesis 12:1-3 and 18:17-19.

First, there is no specific reference to calling or election in these texts. Such theological concepts must be read into them. This is exactly what the NIV translators have done. Though the original Hebrew simply states that God has “known” Abraham, the NIV changes the word to “chosen.”

The NIV, following its usual theological bias, doesn’t even bother with a footnote to tell its unwary readers that it has altered “known” to “chosen” (Marston and Forster, God’s Strategy in Human History, 230).

The surrounding context of Genesis 18:18-19 reveals what it means for God to have “known” Abraham. It does not mean that from before the foundations of the world, God chose or elected Abraham. This idea is not found anywhere in the text. To the contrary, the context reveals that as a result of God calling Abram in Genesis 12, God and Abraham have become friends, so that now, in Genesis 18, God wants to consult with Abraham about what is going to happen to Sodom and Gomorrah.

No one, of course, would deny that God did choose Abraham, or that his friendship with Abraham was a result of his own free choice. But it is one thing to say that God’s “knowledge” of Abraham was a result of his “choice” of him; it is quite another thing to say that his knowledge of him was equivalent to his choice. It is the friendship itself, and not the choice prior to the friendship, that is the ground for God’s confiding in him (Marston and Forster, God’s Strategy in Human History, 231).

Nevertheless, despite the fact that Abram is not specifically said to be “elect” or “chosen,” the overall trajectory of the biblical account is clear: God did specifically call out Abram from all the people of the world.

Why Did God Call Abram?

Of course, notice carefully what Abram was called by God for.

In support of this is the fact that Abram did not actually receive eternal life from God until many years after He was called by God to be a blessing. In the case of Abraham, his regeneration followed his election by many years (cf. Genesis 12:4; 16:16; 17:1).

God first spoke to Abram in Genesis 12, but it was not until Genesis 15 that Abram believed God. According to Paul in Romans 4:3, Abraham was justified when He believed God, which occurs in Genesis 15:6.

And even though Abram made many mistakes before he was a believer, he made many of the exact same mistakes afterward (cf. Genesis 12:10-20 with 20:1-18). The entire record of Abraham’s life in Genesis disproves the Calvinistic system of theology in many ways. 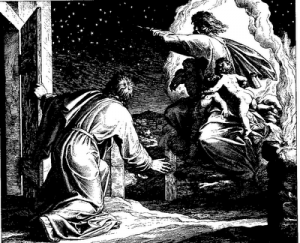 There is one final point to take note of from Genesis 12. Some Calvinists argue that if God had not specially intervened in the life of Abram, Abram would have ended up as an idol worshipper, just like His father. But this is far from obvious in the text.

In fact, it is just as likely that God’s call of Abram was a response to Abram’s response to what he learned about God through general revelation. As we saw in the previous chapter about Total Depravity, the Bible teaches that God has revealed Himself to all people in numerous ways, such as through conscience and creation.

Furthermore, we saw that when people respond to this general revelation of God, God obligates Himself to provide them with further revelation. Maybe God’s special revelation of Himself to Abram is one such example in Scripture. This is speculation, of course, but so also is the Calvinist assertion that Abram knew nothing about God prior to God’s calling of him in Genesis 12.

Ultimately, the point of God’s calling of Abram in Genesis 12 and 15 has nothing whatsoever do with the election or predestination of some to receive eternal life.

Instead, God’s calling of Abram was so that he would be a blessing to the world.

God did call Abram. But it was not necessarily unconditional, nor did it have to do with Abram’s eternal life. The calling of Abram was a calling to service.

God selected Abram to be a blessing to the world.