You are here: Home / Warfare in the Old Testament 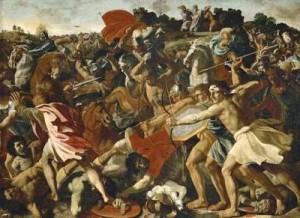 So it was with interest that I recently read the new book by Boyd Seevers, Warfare in the Old Testament. Though the book provided very little in the way of trying to justify or explain why God sent His people into war, it was an enlightening and helpful book explaining how those wars were carried out.

The book essentially looks at the warfare tactics and military weapons used by various cultures in the Old Testament era. It surveyed the methods used by Israel, Persia, Egypt, Philistia, Assyria, and Babylon.

You might think that such a book would be boring to all but those who were interested in warfare tactics and weaponry, but I found the book to be enjoyable to read and helpful in understanding what people in the Old Testament thought about war and how it was to be carried out. Each section began with a fictionalized story about a person, soldier, or commander within the ranks of these armies, and showed what they thought about their actions and why they were going to war. This helps the reader identify with the soldiers and descriptions that follow regarding the weapons and tactics that were used by the various cultures.

Two things stood out for me from this book.

First, every culture tied warfare to worship. To go to war against others was always considered to be an act of obedience to the command and instructions of their god. People went to war because they believed their god was telling them to do so and would protect them in their efforts. Though I already knew this to be the case, this book really impressed upon me how central worship was to warfare in the Old Testament era.

But more than that, it made me wonder: Did I really believe that the Egyptians, Persians, or Babylonians were commanded by their gods to go attack other nations? I do not believe that. I believe that this is how they justified their own decisions to go to war. Since that is so, why then do I believe that God actually commanded Israel to go to war? Could it not be that they also were simply using God to justify their own decisions to go to war? Such a thought has numerous theological ramifications for how we understand God and how we read the Old Testament, which I am not sure I have the courage to follow.

The second element of this book which stood out for me is that one of the longest descriptions in the book about how an army followed Yahweh’s instructions to go to war was in the chapter about how Babylon went to war against Israel. Seevers writes this:

Nebuzaradan then looked at the despondent, confused Judeans preparing for their journey into exile, a journey from which most would never return. Nebuzaradan shook his head. He had grown up in a culture that worshiped other gods, but he served Yahweh better than most of these Judeans had done. He understood well that Yahweh expected real loyalty from his people,which they hadn’t displayed (p. 260).

Isn’t that interesting? The Babylonians followed Yahweh into battle against Yahweh’s people. I knew the truth of this from the Old Testament passages that talk about this, bu it was interesting read it from the perspective of the Babylonian commander.

Anyway, if you are interested in Old Testament backgrounds, this book would be a good addition to your library since warfare plays a huge role in nearly all the Old Testament books. If you want to learn about how war was carried out in Israel and the surrounding nations from about 1500-400 B.C., Warfare in the Old Testament by Boyd Seevers will be extremely helpful.

FTC Disclaimer: This book was sent to me by Kregel for review on this blog.