You are here: Home / Who Killed the Firstborn Sons of Egypt?

Yesterday I introduced the idea that the ten plagues were primarily a way for God to reveal His power over and against the impotence of the Egyptian deities. In this post, we want to consider the tenth plague in more detail, and specifically consider the question about who killed the firstborn sons of Egypt. 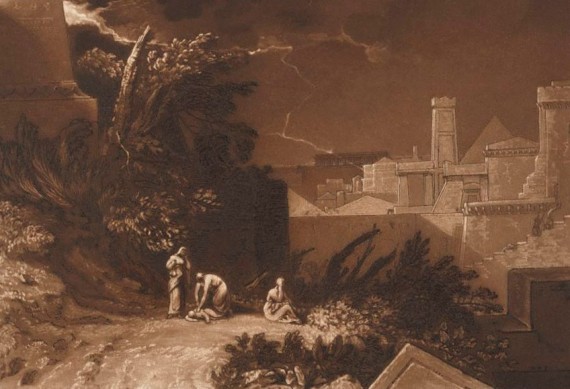 God did not just send Moses to Pharaoh and without any warning, have the firstborn sons of Egypt struck dead. No, there was a whole series of events that led up to this terrible disaster in Egypt.

Furthermore, it should also be noted that the tenth plague was not God’s idea, nor was it the idea of Moses. The destruction of the firstborn sons of Egypt was something that the previous Pharaoh had visited upon the people of Israel 80 years earlier when the Egyptian army killed all the newborn sons of Israel two years old and younger (Exodus 1:16). This is an example of sin cannibalizing itself, so that the sins of the fathers fall upon later generations.

But beyond even this, after the ninth plague, Pharaoh told Moses that if Moses came before him again Pharaoh would kill him (Exodus 10:28). In a way, then, it was Pharaoh who had given the ultimatum of “win or die.” Pharaoh had lost every confrontation against the God of Israel, and so now Pharaoh decreed that the contest was over and even though he had lost, he would still not let God’s people go. The only way forward, then, was to finally and ultimately break Pharaoh’s pride.

Did God Kill the Firstborn Sons of Egypt?

In Exodus 11–12, the text indicates that God decided to kill all the first-born sons of Egypt. This is explicitly stated in various locations, such as in Exodus 11:1 where God decrees that He will bring one more plague against Egypt.

In the following verses, God states that He Himself will go into the midst of Egypt to slay the firstborn sons (Exodus 11:4-5). God later says that it is He who will kill the firstborn in the land (Exodus 12:12). To protect themselves, the Israelites are to put the blood of a lamb on the doorposts of their house so that when death comes, it passes over their house and goes on to those homes which are not protected by blood (Exodus 12:23).

Yet something strange happens in the text.

There seems to be a bit of a transition in Exodus 12:23. There is a peek behind the curtains to what was really happening when the death of the firstborn sons of Egypt occurred.

On the surface of the entire passage, it seems as if God is the one who is doing the killing.

While Exodus 12:12 “suggests that since the Egyptians’ sinfulness had gone too far, God personally executed their firstborn … the Bible contains some specific references to the plagues which hint of something very different occurring” (Campbell, Light through the Darkness, 58). 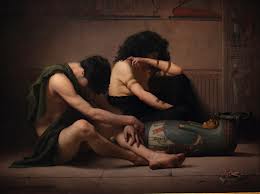 For example, Exodus 12:23 says that when God passed over the doors of the houses which had been marked with the blood of the Passover lamb, He would not allow the destroyer to enter into the house to kill the firstborn of that house.

So it was not God who struck down the firstborn sons of Egypt, but a being referred to as “the destroyer.”

If Exodus 12:23 provides some clarity with what was going on, it appears that God’s primary activity in the tenth plague was not in killing the firstborn sons of Egypt, but in protecting people from the destroyer that had come to kill all things.

In this way, the “passing over” of the Lord is not so much the action of God in skipping a house, but in covering the house with a hand of protection so that the destroyer could not enter that house to kill the firstborn son. Exodus 12:23 indicates that there were two beings involved in the death of the firstborn sons of Egypt: There was God, who put a hand of protection over certain houses, and there was the destroyer, who sought to destroy all, but who was thwarted from doing so by the protective hand of God over certain homes.

So just as with previous violent portrayals of God in the Bible, it seems that when the actual violence occurs, it is the destroyer who destroys, and God’s primary activity is in the arena of protection and deliverance.

Tomorrow we will look at how to understand the tenth plague in light of Jesus Christ dying on the cross. It seems that by His actions on the cross, Jesus affirms the idea that God was the deliverer in Exodus 12; not the destroyer. Until then, what questions, comments, and objections do you have to this approach?