You are here: Home / You’re Disgusting! Burn in Hell!

Maybe people who say such a thing should be arrested, as Bill O’Reilly, Fox news host, suggested on his show.

Love in the Margins

All of my life I’ve had friends who many have considered on the margins, the outer edges of society – LGBTs, homeless, prostitutes, addicts, murderers and other criminals, and you-name-it. I love these people. I mingle with them. I talk with them. I hug them. I walk arm-in-arm with them. 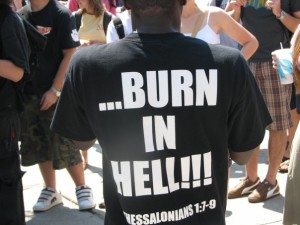 Because of my close association with people on the margins, people who don’t know me often assume I’m one of them.

We’ve experienced hatred directed at us by people who do not know us. We‘ve seen anger, red faces, bulging blood veins, and waving fists. We’ve experienced fear for our safety. All of this behavior was frequently accompanied with Bible verses and numerous references to Jesus.

What would you do in such a situation? Would you go home, or spend more time with your homeless friends? Would you avoid Gay Pride day or march in the parade with your gay friends?

Or would you join the people holding enormous signs telling everyone else they’re going to burn in hell?

Don’t Tell Me to Burn in Hell

If you’re Hindu and think godly people shouldn’t eat beef, then you should live that way. But I’m not Hindu and don’t care and don’t agree. If you have any sense, you’ll keep your religious opinions to yourself and not tell me I am going to burn in hell because I eat beef.

If you’re vegan and think people shouldn’t eat animal products, then you should live that way. But I’m not vegan and don’t care and don’t agree. If you have any sense, you’ll keep your opinions to yourself, and not tell me I am going to burn in hell because I eat meat.

If you believe I’m lazy and good-for-nothing because you think I live on the sidewalk downtown, then keep your opinions to yourself. I do not need to know what you think. If you can’t show me Jesus by saying a kind word, giving me a sandwich or a hug or helping me in some way, keep your Bible verses and religious opinions to yourself. I don’t care what you think and don’t want to hear it. Consider the possibility that in a few years the situation may be reversed and I’ll have a good job and you’ll be sitting in front of me asking for a job.

If you think your holy book says I’m an abomination because you think I’m gay, and that I’m going to burn in hell forever, please keep your opinions to yourself. If you can’t show me Jesus by getting to know me, saying a kind word, hugging me, and loving me, then please, please go to your religious meetings with people like you and leave the rest of us alone.

If you can’t show me Jesus by the way you act, by the way you treat me and others like me, go away. Go hide behind the walls of some building, sing your silly songs, and read your holy book. Please stay there and leave the rest of us alone. There is no need for you to come out from behind your walls, wave your signs, and shout curses upon us to go burn in hell.

You don’t know me. Until you spend time with me – lots of time – and walk with me, sit with me, love me, understand me, you should not try to tell me anything about what I should do or how you think I should live.

You will think what I am about to say is irreverent, but here goes – Fix yourself first. Fix your own screwed-up life, your own messed-up family. Look in the mirror. Who you see is the person you need to fix. Leave the rest of us alone. I think Jesus said it this way: “You hypocrite, first take the log out of your own eye, and then you will see clearly to take the speck out of your brother’s eye.”

Read your holy book and see what Jesus really did, how he really treated people. Treat me like that. Once I know you care about me and love me, maybe I’ll ask why, since your kind have never cared about me or loved me. I’ve been spit on, called names, threatened with eternal burning, threatened with your fists, and threatened that your god is going to do terrible things to me.

I know you hate me and you think your god hates me too. I don’t want anything to do with you or your god. Both of you are mean, evil, and nasty.

Hanging out with Jesus 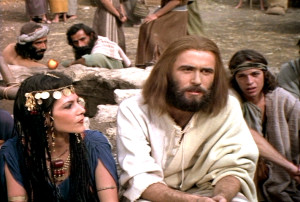 Jesus I like. I want to see him. I want to sit with him, and talk with him. But you – you repel me. Go away. Leave me alone. Until you’re ready to love me, Goodbye Mr. Christian, Mr. Bible-verse-quoter, Mr. “You’re disgusting. You’ll burn in hell.” Goodbye and good riddance from all of us.

This Jesus fellow says that if you believe him you’ll do what he says. That’s in your Bible. You missed that part, huh? Jesus was such a good friend to the people in the margins, to the “sinners” – the traitorous tax collectors, the terrorist zealots, the promiscuous prostitutes, the drunks, the thieves, the liars, and murders – that those religious people who hated these “sinners” also hated Jesus.

Have you ever thought that by telling the people you think are sinners to go burn in hell, you are telling the same thing to Jesus? Because he’s one of us. No, he’s not a sinner, but he hangs out with us. He loves us. He sits and talks with us, hugs us, and dances with us. And you, because you never got to know us, didn’t realize Jesus was among us when you told us all to go burn in hell.

I won’t say the same thing back to you. I won’t tell you to go burn in hell. I wouldn’t pronounce that curse on anyone. You may think I am an abomination, but notice that I don’t think the same thing about you.