You are here: Home / Zeitgeist the Movie 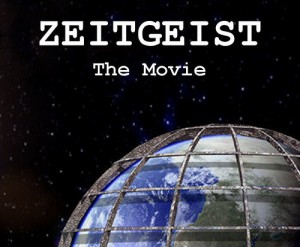 Recently I told you of my encounter with Lance, the juggling-stick expert, and Merril, his Mayan-guru babysitter. I met both at the Scarborough Renaissance Faire and we talked some about Jesus and hope for the future. To understand where he was coming from, he told me to watch Zeitgeist the Movie. (Zeitgeist is German for “Time Spirit” or “Spirit of the Age.”)

Having watched it, I am a bit perplexed. Zeitgeist the Movie is actually two movies (or documentaries).

Think about it. Religion has actually convinced people that there’s an invisible man, living in the sky, who watches everything you do, every minute of every day. And the invisible man has a special list of ten things he does not want you to do. And if you do any of these ten things, he has a special place, full of fire, and smoke, and burning, and torture, and anguish, where he will send you to live, and suffer, and burn, and choke, and scream, and cry forever and ever until the end of time.

But he loves you!

He loves you, and he needs money! He always needs money. He’s all powerful, all perfect, all knowing, and all wise, but somehow, just can’t handle money. Religion takes in billions of dollars, they pay no taxes, and they always need a little more.

Now, you talk about a good bullsh*t story, holy sh*t!

This is, of course, a caricature, which is why it’s funny. However, it’s sad, because when you boil “religion” down, George Carlin isn’t too far from the truth. Frequently, religion uses God to scare people into giving away their money. Much of Christendom operates in the same way.

What I hope to impress upon Lance is that Jesus is not this way at all. Jesus is just as upset and angry about this kind of religion as George Carlin is. Maybe angrier. When Jesus saw this sort of thing going on in the temple, He made a whip and nearly started a riot (Matt 21:12).

However, that was all just part of the introduction to Zeitgeist the movie. The real movie was divided into two parts, and I frankly am not sure how they fit together, so I will deal with them separately.

Part 1 of Zeitgeist the movie: Jesus is a Myth

The first forty minutes is designed to make you think that religion in general, and specifically the stories about Jesus, are all a myth based on Egyptian astrology. I found parts of this section very disturbing, especially since, in all my “religious training” I have never heard any mention of what this movie states. Here is a website which summarizes some of the things the movie reveals.

Has anyone done any research in these things? What solution/answer can you provide? All the parallels between Jesus and Horus are incredible, especially when you consider that the stories of Horus predate Jesus by thousands of years. 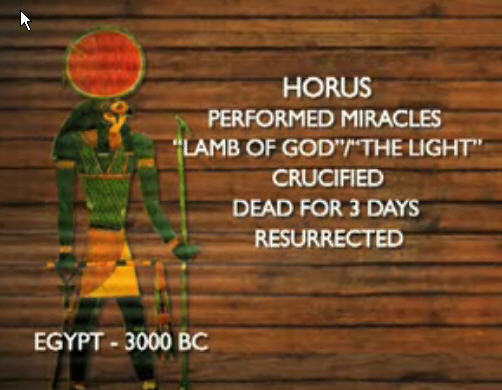 Note: After doing a lot of reading, research, and thinking on the topics in this post, I wrote a follow-up post about the pagan roots of Christianity here and some of my concluding thoughts about Zeitgeist the movie. Go check it out and let me know what you think.

Part 2 of Zeitgeist the movie: US Politicians and Bankers are Robbing the World Blind

Part 2 was a conspiracy-theory smorgasbord. It attributed both World Wars, plus Vietnam, 9/11 and the war we are in now, as well as the Great Depression upon dirty public officials and rich bankers. The ultimate goal, the narrator says, is a one world government with a one world bank.

He may be right about this…I don’t know. But I guess if it turns out to be true, I wouldn’t be too surprised. The funny thing is that some of the sections of this part of the movie fit very well into prophecy about the End Times, the Mark of the Beast, and the coming Antichrist, especially the parts at the end about the RFID chip and the National Identification Card (which he said will be required of all US citizens in May 2008). Various Christian “Prophecy Buffs” love this sort of thing.

Conclusion (My take on Zeitgeist the movie)

So watch Zeitgeist the movie at your own risk. I watched it so that I can continue to the conversation with Lance. He seems to be a very intelligent person, with a love for life and people. I think Jesus would hang out with Lance and learn how to use those juggling sticks. So maybe I will to.