You are here: Home / All Religions Are the Same 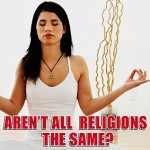 It’s true what they say: all religions are the same.

All Religions are the Same

All religions have at their core the idea that God is mad at the world and people have to do certain things to make God like them again. Usually, the good things that God wants us to do involve wearing silly hats, eating certain foods, and listening to some person talk for an hour before we give him money. This is true of any religion, whether Jewish, Muslim, Rastafarian, Santeria, Moorish Science Temple, Hindu, or… dare I say it? …Christian.

If you took away the hats, the robes, the names on the buildings, and some of the titles for “God” that different groups use, you would be hard pressed to tell the difference between most of the world religions, …including Christianity.

The objection to the claim that all religions are the same is that “Christianity isn’t a religion; it’s a relationship! It’s a way of life!”

Few Think They are Religious

Nevertheless, almost everybody is in a religion, including most Christians. Most people believe God is mad at them for something they did or said, and they are doing certain things to try to make God happy again. The core of religion is that we can somehow pleas or appease God by our own good behavior or beliefs. If you believe that, then you are part of a religion, even you bear the name “Christian.”

Of course, I do consider myself a “Christian” in the sense that I am a follower of Jesus. I just think there is a vast difference between what has come to be known as Christianity, and what Jesus actually intended.

What Separates Jesus from All Religions?

So what sorts of things separate Jesus followers from all other religions in the world? 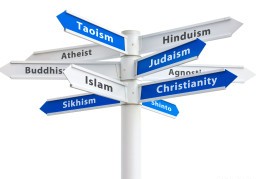 Well, I will tell you one thing that doesn’t separate us…. good works. You sometimes hear Christians say, “We are more generous, loving, kind, and forgiving.” That’s crap.

Sure, it’s true sometimes. But in my experience, some of the most forgiving, kind, and generous people I know are of some religion other than Christianity. Many of them are atheists.

You can always find another religious group that is behaves better than many Christians.

So, it seems to me that the main difference between Jesus and every man-made religion in the world (including the Christian religion) boils down to one word: grace. But not the watered down grace you hear preached from pulpits and described in books.

No, the one thing  that separates what Jesus revealed to the world and what we see in all religious groups is one thing: indiscriminate, scandalous, shocking, outrageous, senseless, irrational, unfair, irreligious, ridiculous, absurd, offensive, infinite grace.

If you don’t hold to this kind of grace, it might be because you are part of a man-made religion, even if you call yourself “Christian.”

I am someone who came out of the Christian religion and now follows Jesus on the way of grace.

As a reader of this blog, you are probably similar. Together, we challenge some of the ideas and practices of Christianity. We raise questions about what Scripture really teaches, what God is really like, and what it means to be the church in the world today. We look for ways to reveal the scandalous grace of God to the world, raising questions about justice, righteousness, forgiveness, and love.

All religions are the same, which is partly why I am not part of any religion. I do follow Jesus, but try to do so in a religionless way. How about you?