You are here: Home / What is the Baptism of Repentance for the Forgiveness of Sins?

On the Day of Pentecost, Peter invited the Jewish people who responded to his message to repent and be baptized for the remission of sins.

What does this mean, and is this how people get saved today?

It usually refers to changing the mind regarding your former beliefs and behaviors, and turning to a new way of believing and behaving. This change, of course, is exactly what John’s baptism represented for the Jewish people. When they came to be baptized by John in the Jordan, they were turning away from the corrupt forms of religious Judaism, and turning to a new way of living according to the loving and forgiving ways of God. In this way, repentance and baptism have nothing to do with receiving eternal life, or even receiving the forgiveness of sins. Both are just a way of turning away from the past and turning toward a new life for the future. 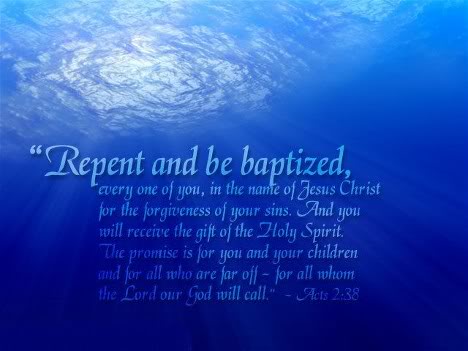 What is the Remission of Sins?

This is why the Jewish religious leaders of that time became so focused on properly keeping the Law of Moses. It was thought that if the nation could perfectly keep the law, then God would finally deliver Israel from the Romans and restore Israel to her rightful place among the nations.

So in other words, to be delivered from sin was to be delivered from the Romans, and vice versa. National sin and enemy occupation were one and the same. If the nation was delivered from one, it must logically have deliverance from the other as well. So when John the Baptist, and later Peter at Pentecost, speak about “the remission of sins,” they are not talking about gaining eternal life and entrance into heaven, but about the great Jewish hope of finally being freed from the twin enemies of sin and Roman occupation. Remission from sins is both freedom from the captivating and addictive power of sin and from the dire political and national consequences of sin for the people of Israel.

This idea is seen clearly in Jeremiah 31, where New Covenant language ties forgiveness of sins with the Israelite expectations for God’s rule on earth. During this time, God would reign in righteousness over all the earth from Jerusalem, Israel would be delivered, and evil destroyed. It is for this hope the Messiah would come.

It is for this hope that John preached. This was his message about the baptism of repentance for the remission of sins.

It is the arrival of this hope that Peter now proclaimed. And the Jewish people who heard the message of Peter and who wanted to participate with this arrival of the Kingdom of God in Jesus Christ indicated this desire publicly by receiving the baptism of repentance for the remission of sins, just as others had done with John about three years earlier. They wanted deliverance and freedom, not only from Rome, but also from the controlling and captivating power of sin.

So again, the baptism of these Jewish people on the day of Pentecost in Acts 2 is a thoroughly Jewish form of baptism. This helps explain what happens next in the book of Acts….