You are here: Home / Bloody Jesus

A few nights ago I was talking with my incredibly smart and beautiful wife about the violence of God in Scripture and how we can interpret both in light of Jesus Christ, and we realized that in some ways, Christianity has fallen into the same trap that Judaism fell into so many years ago. 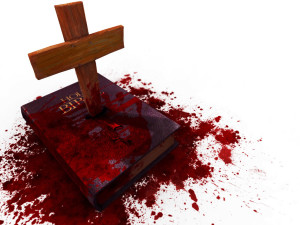 Before Jesus came (and in fact, even today) when Jewish people read their Hebrew Scriptures and saw a violent God doing violent things, they projected this onto their expectations for what the Messiah would be and do when He finally came. They saw a violent God, and so were looking for a violent Messiah. They wanted a Messiah who would throw off Roman rule, would slay the enemies, kill the wicked, and banish all the unrighteous into eternal pits of darkness and gloom.

This was partly why the Jewish religious leaders rejected Jesus as the Messiah. He did not fit the bill! He did not live up to their expectations. He did not match what they read in the Bible. He did not fulfill the expectations, promises, and prophecies of what the Messiah would do when He came. And in fact, on numerous occasions, Jesus flat-out told them that the reason He was not doing these things is because they had misread and misinterpreted their Scriptures.

Hmmm…. now take those two paragraphs and substitute in what Christians think about the second coming of Jesus….

By an amazing twist of hermeneutical skill, we Christians have learned to nod our heads at both Jewish and Christian interpretations of Scripture.

We say, “The Jewish interpretation and understanding of God was correct. They just got the timing all wrong. God is violent and bloody, and so is the Messiah. But Jesus didn’t come the first time to kill all the sinners; He will do that when He comes again. Maranatha! Come, Lord Jesus! Let the bloodbath begin!”

We look at the Bible, and just as our Jewish predecessors did, see a violent God doing violent things, and we project this onto what we think Jesus is supposed to be like. Some of us look forward with great eagerness and expectation for when Jesus will come again to throw off the evil governments and set up His own righteous rule, but not before He slays our enemies, kills the wicked, bathes the world in bloodshed, burns away all those who did not follow Him, and banishes the unrighteous into pits of never-ending fire to suffer and burn for all eternity.

I wonder… Is it possible that Jesus sees this and shakes His head at us just as He did with the Jewish religious leaders? Could He be saying to us what He told His disciples during the Last Supper? “Have I been with you for so long and you still have not seen the Father? God is not like that and neither am I! I came to reveal the Father to you! If you have seen Me, You have seen the Father also.”

One of the failures of the Jewish religious leaders was that they were looking for a bloody Messiah who would slay the wicked.

Could it be that one of our failures as Christians is that we are looking for a bloody Messiah who will slay the wicked?

Does it not seem more likely that the bloodstains on the robes and hands of Jesus are not the spilled blood of His foes, but rather His own blood spilled for them?