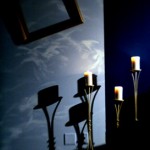 Next to God, the Bible, and the Gospel of grace, one of my great loves is the Church. I’ve been reading and hearing a lot about the “emerging church” recently, so I decided to visit one on Sunday. I went to google and searched for “postmodern emergent church dallas” and eventually found one that looked good.

I had learned from my “Acts 29” experience, so this time, I decided to “dress down.” I wore shorts and a ball cap. I’ve never worn a ball cap to church before, and during the service, I kept wanting to take it off. I probably would have taken it off during prayer time, but they didn’t have a prayer time, so I was able to keep it on. If I really wanted to feel at home, I should have walked in carrying an iPhone in one hand (No, I don’t own one) and Starbucks coffee in the other (No, I don’t like Starbucks).

The service started at 5:10, which seemed kind of odd to me, but made a bit of sense later. When I walked in, my very first reaction was that the church was much smaller than I thought it would be. Maxed out, the room couldn’t sit more than 70 people. The primary lighting in the room was candles, which provided a soft, worshipful “feel.” Some think that candles are bad because they are used by Catholics, Mystics, and cults. Personally, I like candles.

As I wandered around the room trying to decide whether to sit in a couch (yes, they had couches) or a padded pew, I noticed several pieces of art on the wall, and a coffee bar off in the corner. Nobody greeted me or even said “hi.” I guess emergent churches are just as distant toward newcomers as regular churches.

Wandering Around an Emerging Church

Eventually, as I wandered around, I found a room in the back which was more dimly lit than everywhere else and had some blue glowing birds in the center on a table. I went in to see what they were. On the table with the glowing birds were some mirrors and some instructions that as we enter into prayer, we should clear our mind of all thoughts (or something like this). I was alarmed at this piece of Eastern Mysticism which contradicts commands in the Bible to not clear our minds, but fill our minds (cf. Php 4:8). But I didn’t linger long, because I noticed four or five other tables around the room, and wanted to see what was on them. One had a “finger labyrinth” which the instructions said was like a real life prayer labyrinth, only much, much smaller. Supposedly, as your finger traced its way through the labyrinth, you were supposed to leave the cares of the world outside, and focus on the kingdom of God inside. Okay.

The next table had a big bowl of sand with a smaller bowl of rocks. The instructions told me to pick up a rock and hold it in my hand while writing my sins in the sand. After my sins were written in the sand, I was supposed to wipe them away because Jesus had removed my sins from me. I didn’t understand the rock, and thought maybe it was supposed to help me focus or channel. It was only after I got home and told my wife Wendy about it that she enlightened me. She said, “Well of course. It’s like the woman caught in adultery, and as people gathered around to stone her, Jesus wrote their sins in the sand.” Now that my wife caught the imagery, I think this is a pretty cool idea. I now wonder if the labyrinth and the glowing birds have some biblical imagery that escapes me. Maybe the birds symbolize sparrows (Matt 10:29).

On another table there were prayer candles you could light. This is also a Catholic practice, but I don’t think there is anything inherently wrong about it. The final table held a pitcher, basin, and a towel, which I supposed could be used to wash someone’s feet (John 13), or maybe your own hands as a symbol of neglecting Jesus (Matt 27:24). 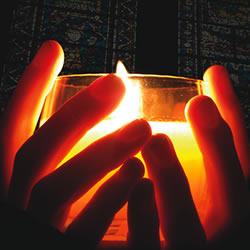 The beginning of the service was announced by a funny little video which I won’t try to explain. The welcome was given by a young guy who explained that he was now happy in life again because he got a new iPhone. He was one of the first people in the country to get the iPhone on opening weekend, but the first day he had it, he went swimming with it for 20 minutes, and found out it wasn’t waterproof. So apparently, a week earlier in church he was pretty depressed because he had plunked down $600 for an iPhone and barely even got to show it off. Anyway, he took the phone into an Apple store and told them it was “broken” and they gave him a brand new one, no questions asked. So now life was good again.

The music was well done, and they even admitted to changing the lyrics on a few songs to fit proper theology. I agreed with their changes, which means our theology is somewhat in sync. They sang for about 20 minutes, which is typical for most churches, with a good blend of contemporary songs and hymns.

I wryly noticed during the singing that the pastor’s husband (Did I forget to mention that the pastor is a woman?) didn’t sing a word of any of the songs. He stood there next to his wife and scowled the whole time. She looked a little flustered herself. I’ve been a pastor before, and so I recognize what probably was going on. Most pastor families have big fights right before church. Actually, most families in general have big fights right before church. If you are part of a family, and you go to church, you know this is true. I don’t think this is coincidence. Anyway, I can’t be sure, but I wouldn’t be too surprised to find out that the pastor and her husband had a fight in the car on the way to church.

After the singing, the pastor got up to speak. Apparently, she is preaching through Acts, which pleasantly surprised me since most churches today are turning away from systemmatic, expository preaching. She spoke from a portion of Acts 17, where Paul presents Jesus and the resurrection to the philosophers in Athens. Honestly, it was one of the better sermons I’ve heard in Texas so far. She went through the text verse by verse, reading it, explaining it, and applying it. She did a fantastic job.

One thing I liked, but which was very new to me, was that at any time during her message, people from the congregation could intersperse comments, jokes, or questions. Probably, this is much closer to the way it was in Acts and in the early church (Read some of the sermons by St. John Chrystostom to see what I mean. He too was expository, teaching his way through books of the Bible, and the transcriptions of his sermons are often sprinkled with his response to questions or comments from the crowd). I think that given the setting, the number of people there, and the personality of the pastor, these comments and questions from the congregation really enhanced the message and kept it even more lively and interesting than it already was. Many of the comments were very witty. The pastor’s husband, by the way, scowled all the way through the sermon too. He never laughed or smiled at anyone’s comments. Yes, there was definitively some marital conflict before church.

Let me say for the record that I do not believe that there are any biblical grounds for women being elders or teaching pastors of a church. This doesn’t mean women don’t know how to teach the Bible or don’t have teaching gifts. This woman clearly had a gift of teaching and knew her Bible well. I was impressed. But that doesn’t make it right.

Anyway, she taught for about 35 minutes. She sat on a stool, and used minimal notes. After the message, she explained that they always have a time of response to the Word (which I think is another great idea), and this week, she thought that the best way to respond to what we had learned was to have a time of silence (which I didn’t think was the best idea). It’s not that I don’t like times of silence. I do. I think church services and life in general should have more times of silence. I have an idea for an entire silent sermon I might give someday (the tapes probably won’t sell real well though). I just think there might have been some better ways to respond to this particular text. 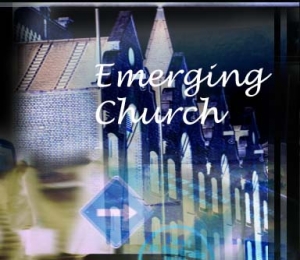 The End of the Emerging Church

After the silence, they took an offering and had some closing announcements. The service ended at 6:10 pm, and they said in continuation of their worship, they would like to invite everyone to join them at Chipotle’s for food and fellowship. This is why they meet at 5:10, so they can all go share a meal together afterwards. Again, I really liked this idea (cf. Acts 2:42), but decided not to go since Wendy was waiting for me at home.

All in all, I don’t see what the big fuss is about. Maybe this church truly isn’t “emerging.” I never did see a doctrinal statement, and one visit doesn’t tell me too much about what they believe. But frankly, most “non emerging” churches I have visited are so stale and dead, they probably need to emerge a bit. Also, most sermons I hear in these other churches are so shallow and empty of content, it would almost be better if there were no sermon at all.

This shallowness and emptiness is one reason why “emergent” churches started. And I think we probably have a lot to learn from them. I’m going to visit this church again, just so I can get a few more questions answered (“What’s the deal with the birds?). And then maybe I will try to find another emerging church to visit. I do know that in a few weeks I am going to visit a “cowboy church.” I’ll report on that as well, but I can tell you one thing: there probably won’t be any candles.