You are here: Home / Following Jesus into the World 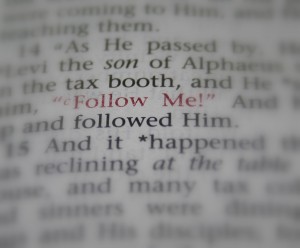 In my book, Skeleton Church,

I suggest that church is best defined as “The people of God who follow Jesus into the world.” Jesus wants to take the church out of our buildings and into the streets and parks of our towns to love and serve the people who are there.

What will this look like in your town and your community?

Yesterday I began to ask this question by challenging you to try to look like Jesus. I suggested a few ways to move in this direction, but let’s get down to brass tacks.

What can Your Church do to Look Like Jesus?

Here is my answer: I have no idea.

Nobody really knows what church will look like ten, twenty, or a hundred years from now. Even the path to get wherever we are going is full of questions and uncertainty.

In a Newsweek article about the church, Andrew Sullivan wrote this:

I have no concrete idea for how Christianity will wrestle free of its current crisis, of its distractions and temptations, and above all its enmeshment with the things of this world. But I do know it won’t happen by even more furious denunciations of others, by focusing on politics rather than prayer, by concerning ourselves with the sex lives and heretical thoughts of others rather than with the constant struggle to liberate ourselves from what keeps us from God. What Jefferson saw in Jesus of Nazareth was utterly compatible with reason and with the future; what Saint Francis trusted in was the simple, terrifying love of God for Creation itself. That never ends.

This Christianity comes not from the head or the gut, but from the soul. It is as meek as it is quietly liberating. It does not seize the moment; it lets it be. It doesn’t seek worldly recognition, or success, and it flees from power and wealth. It is the religion of unachievement. And it is not afraid. In the anxious, crammed lives of our modern twittering souls, in the materialist obsessions we cling to for security in recession, in a world where sectarian extremism threatens to unleash mass destruction, this sheer Christianity, seeking truth without the expectation of resolution, simply living each day doing what we can to fulfill God’s will, is more vital than ever. It may, in fact, be the only spiritual transformation that can in the end transcend the nagging emptiness of our late-capitalist lives, or the cult of distracting contemporaneity, or the threat of apocalyptic war where Jesus once walked. You see attempts to find this everywhere—from experimental spirituality to resurgent fundamentalism. Something inside is telling us we need radical spiritual change.

But the essence of this change has been with us, and defining our own civilization, for two millennia. And one day soon, when politics and doctrine and pride recede, it will rise again.

Hopefully, each group of people who seek to follow Jesus into the world will look different.

One of the main problems in church history has been the desire of some churches to imitate the success of others. This has led to the rise of idol churches, where their message and methods are copied almost verbatim, and then reproduced and transplanted around the world, often with much less success than the original. The pastors and leaders of such copycat churches are not studying their own geographical culture, or looking at the people whom God has given them to work with, but are instead trying to emulate the culture and people of somewhere else. This shuts down the great things God is trying to do in their own unique situation.

Nevertheless, those who follow Jesus into the world will be characterized by a few universal traits due to their association with Jesus. We will begin to look at these traits tomorrow.

What are you doing to follow Jesus into the world and look more like Jesus to those you meet?